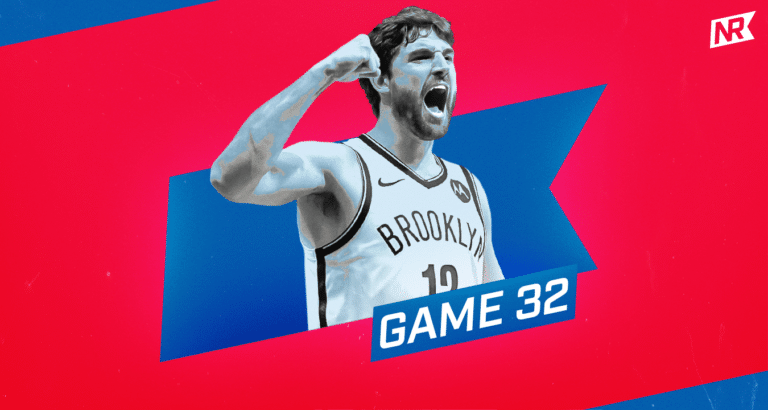 Fresh off an impressive win against the Lakers, the Brooklyn Nets returned to Staples Center to finish up their arduous west coast road trip against the Clippers on Sunday night. Already 4-0 on the trip and 3-0 without the services of Kevin Durant, Brooklyn came into Sunday’s contest as one of the hottest teams in the league. On the flip side, the Clippers were fresh off a win against the Jazz who currently own the NBA’s best record.

Even without Kevin Durant playing this game lived up to the hype. With the Nets up by as many as 15 points in the second half, Los Angeles mounted a spirited comeback, spearheaded by Paul George and Kawhi Leonard. However, Brooklyn held tough, coming up with key stops on the defensive end to hold on for a four-point win. With such an action-packed game here are three key takeaways from Brooklyn’s nail-biting victory:

As highlighted in all the advertisements this game was a battle between marquee superstars and they did not disappoint. Early on it was the James Harden and Kawhi Leonard show. Both guys came out the gate firing. Harden himself tallied 13 points and 7 rebounds while Kawhi put up 14 points in the opening period. Paul George then started coming alive in the 2nd quarter hitting a few threes of his own. Honestly, if you were a fan of superstar talent this was your game. Not to be lost in this all was Kyrie Irving who was his usual self. Hitting contested 3s, getting tough layups, and being lethal in the mid-range. However, the true highlight of the night was Irving throwing down a double-clutch dunk on a fast break in the 3rd quarter which had all of Nets Twitter buzzing.

In total the duo of Harden/Irving combined for 65 points while the duo of Leonard/George combined for 63. Harden led all scorers with 37. And how fitting that the game came down to Harden drawing an offensive foul call on Kawhi in the final seconds.

What can Brown do for you?

It goes without saying that Bruce Brown might be Brooklyn Nets fans’ favorite player outside of Joe Harris. It’s most likely because Brown is a lunch pail type of player that brings it every single night. And this game against the Clippers was no different. Brown was his usual, ball of energy self. Every time you looked up he was fighting for loose balls or cleaning up misses on the offensive end. He had some key finishes in transition as well. One of his best hustle plays of the night came in the 3rd quarter where he chased a loose ball and bounced it off Patrick Beverly to keep the possession. Brooklyn would immediately score on a Joe Harris three off an out-of-bounds play.

It’s the little things Brown does that don’t always show up in the box score but make a huge difference in a game. Also worth mentioning Brown getting into a little scuffle with Paul George after a foul call in the 4th quarter which had Brown exchanging some sailor talk. With a tough-as-nails demeanor on the court, it’s fair to say Brown is a member of the Salty Spitoon.

DeAndre Jordan: From zero to hero

Usually, the butt of jokes from Nets fans, DeAndre Jordan wound up being the unlikely hero for Brooklyn. After a tough 1st half which included giving up some costly offensive rebounds, DeAndre found himself playing extended minutes in the second half after Jeff Green left the game due to injury. It might be fair to say that this 4th quarter was the best quarter of basketball Jordan has played all season. He battled on the boards and came up with timely blocks. This all leading up to his game-winning tip-in off a Kyrie Irving missed 3-point attempt. Jordan would end the game with 13 points, 11 rebounds, and 4 blocks in 32 minutes of action. Ironically in a game full of superstars, DeAndre was Brooklyn’s leading scorer in the final two minutes with three points.

There were two huge stat categories that have to be addressed in this victory and that’s Points in the Paint (PIP) and turnovers. A big part of the Nets’ early-season woes was attributed to too many turnovers and allowing teams to do whatever they wanted on the interior. However Sunday night against the Clippers, the Nets dominated in both statistical categories. Brooklyn outscored Los Angeles 60-38 in PIP and committed only 6 turnovers to the Clippers’ 17.

With the win over the Clippers, the Brooklyn Nets end their road trip with a perfect 5-0 record. This is the first time it has happened in franchise history. It was also the eighth consecutive victory against a western conference opponent which is tied for the longest streak in franchise history as well. The fact that this team was able to go perfect against some formidable western conference foes while only having Kevin Durant available for one of those games speaks to just how good this Brooklyn team is. The sky is truly the limit with this group.

The Brooklyn Nets return home on Tuesday to face the Sacramento Kings. Can Brooklyn keep up the winning streak?