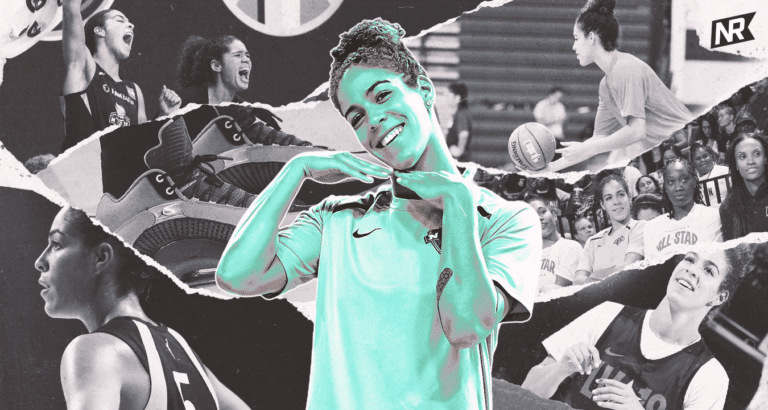 The New York Liberty’s blockbuster trade came at the cost of All-Star Kia Nurse. NR looks back on her finest moments in seafoam.

Sacrifices are to be made if the New York Liberty are set to emerge from their three-year rut. 2019 All-Star Kia Nurse recently became one of those sacrifices, traded to the Phoenix Mercury along with Megan Walker in a three-team deal that sent Natasha Howard and Sami Whitcomb out to the Big Apple.

Nurse, a 24-year-old Hamilton, Ontario native, partook in 89 games in seafoam over the last three seasons after she was chosen with the 10th pick of the 2018 draft out of Connecticut.

“The unfortunate part of transactions such as these is that you have to say goodbye to people who have contributed to the team in so many ways,” Liberty general manager Jonathan Kolb said in a statement upon Nurse’s departure. “Kia shone particularly brightly in New York, becoming an All-Star in just her second season in the league.”

In celebration of Nurse’s New York career, NR looks back on her finest moments as a member of the Liberty…

6/2/18: Kia Nurse and the Indianapolis Jolts

Nurse’s first major strike in her international invasion came in her fourth career contest. She put up 34 points a visit to Indiana, providing the difference in an 87-81 victory. Not only did Nurse lead all scorers (second-best from a 2018 rookie), but she saved the best for last, earning her final eight points in overtime (accounting for half of the New York tallies). With just over a minute remaining, Nurse earned a crucial offensive rebound and put-back that tied the game permanently erased the Fever’s lead.

Fate denied the basketball-loving public collaborative efforts between Nurse and Asia Durr, the respective 2018 and 2019 first-round picks in New York, beyond a shared 18 games during the 2019 season. But the pair united for a stellar effort in a win over Minnesota, their second straight in what would be a 7-3 streak. The Jordan Brand spokeswomen united for 46 points, 26 coming from Nurse and her sinking 9-of-15 from the field, including a quarter from beyond the arc.

The Liberty earned a 75-69 victory at Westchester County Center that night. Due to injuries and EuroBasket absences, Nurse also wound up playing all 40 minutes, duplicating the feat in the rematch in Minneapolis ten days later. “She plays hard all the time,” Durr said of Nurse after that night. “Players who play hard the whole game, good things are bound to happen. She’s that one.”

The Amanda Show took center stage in a June 2019 win in Los Angeles. Fellow veteran and 2020 departee Zahui B tallied a career-best 37 points in the 98-92 triumph over the Sparks…but Nurse was making Liberty history in the process. Not only did she score 26 points in New York’s comeback effort, she tied a team record by sinking 15 free throws. Her fellow champion of the charity stripe? Kia Nurse, who also sank 15 in the aforementioned 34-point game against the Fever just over a year prior.

Hours after the smoke from Independence Day fireworks dissipated from Phoenix skies, Nurse brought over some homemade firecrackers from Canada in a tilt with the Mercury. Unknowingly battling her future employers, Nurse sank 8-of-11 from the field (4-of-6 from three-point range) in a back-and-forth thriller, eventually taken by the Liberty by an 80-76 decision.

It’s fair to say the WNBA’s Floridian excursion in the Bradenton bubble was a bit of a struggle for Nurse, whose 2020 momentum was stifled by an ankle injury sustained in the very first game. The experience did create, however, a chance for Nurse to grow and develop her leadership skills as a “baby vet”. Her third year as a pro was a lifetime compared to her teammates, many of whom were rookies, as she formed a leadership triumvirate alongside Zahui B and Kiah Stokes.

Nurse’s leadership was best on display not through a win, but through a brutal loss to the future champions from Seattle. With the Liberty’s deficit reaching the 40s, head coach Walt Hopkins understandably removed his starters from the game. But in the midst of disaster, Nurse felt there was an opportunity for growth on all New York levels. After convincing assistant coach Dustin Gray to go along with the endeavor, she insisted on re-entering the game in the latter half of the fourth quarter. Nurse wound up earning 21 points in the defeat.

“At that point, it was just that you could go down fighting or you could go down not fighting. I knew that I had a lot of energy and that I could play as hard as I could,” Nurse said of her request for reinsertion. “I know it’s tough, especially as a rookie, to be on the court at that time and try to find something, something that works. I told Dustin that I wanted to go back in, I wanted to help (the rookies) out. I think, for me, it was just about being able to continue to impact the game. Tonight, it was trying to play as hard as possible. “I think, by that point in the game, you’re showing your character, showing what you’re made of.”