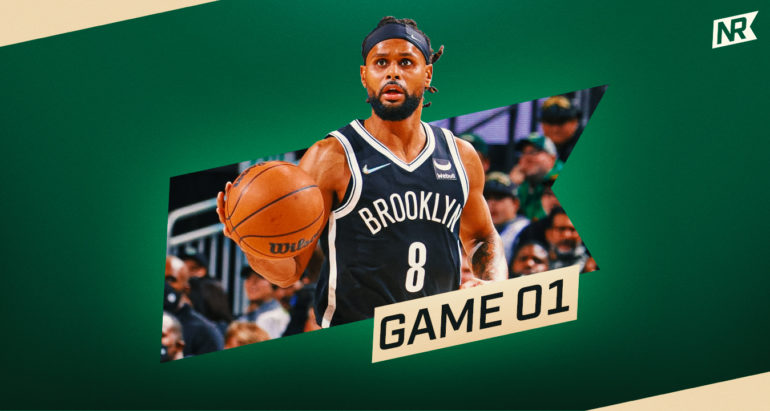 Well, the regular season is finally here after a rather brief offseason. And what a way for the Brooklyn Nets to begin their 2021-22 campaign than against the defending champion Milwaukee Bucks.

After the ring ceremony the game tipped off, and from the jump, it was clear Milwaukee just had more energy than Brooklyn. The Bucks started the first quarter off sizzling from three. Milwaukee connected on seven deep balls in the opening quarter. That coupled with a slow start from the Nets’ offense propelled the Bucks to a double-digit first-quarter lead.

The second quarter saw Brooklyn finally settle down and appeared to get themselves back into the mix. James Harden, Patty Mills, and Joe Harris all connected on a few threes however every time Brooklyn would build some momentum, there were the Bucks to stop them in their tracks. For a quick glimpse, it did appear the Nets were ready to turn the tide in the game as they ended the half on a 16-5 run which was capped off by a Blake Griffin alley-oop slam in transition.

Down seven points at the half, the thought was Brooklyn had finally found their rhythm and were ready to really make a push in the second half. However, that wouldn’t be the case as turnovers and poor free-throw shooting marred any hope of building sustained momentum. Nic Claxton, who got the start for just the second time in his young career struggled mightily on both ends of the floor.

Some garbage time buckets made the score more bloated than it really was when Steve Nash emptied the bench however it’s not as if it was a relatively close game at the point Nash waved the white flag either. When the dust settled Milwaukee was on the winning end of a convincing 127-104 victory. KD led the Nets in scoring with 32 points while pulling in 11 boards. The Beard also flirted with a triple-double. With a plethora of talking points to go off of, here are a few of the key takeaways from Tuesday’s loss:

When the Nets acquired Patty Mills, fans knew they were getting a legitimate 6th man and Mills proved to be just that in his first official game with Brooklyn. Mills’ immediately made his presence felt in the first quarter knocking down a couple of threes. In fact, you would have thought Mills was in a three-point contest the way he was firing from deep. The Aussie finished the game with 21 points and went a perfect 7-for-7 on his three-point attempts. In fact, Mills scored all but four of the team’s bench points. Whenever the Nets needed a jolt Patty seemed to come through with a deep ball. Now obviously the Nets and their fans can’t expect Mills to have these types of performances on a nightly basis but this was just a glimpse of the type of firepower Brooklyn has coming off their bench.

As mentioned, Nic Claxton was inserted into the starting lineup for the season-opener. It marked just his second start at the NBA level. He started his season off with a bang as Harden found him on an alley-oop lob for the team’s first points of the game. However, after that, it went downhill for the big man out of Georgia. It was apparent Claxton was overmatched on the boards and just couldn’t bang with the likes of Giannis Antetokounmpo and Brook Lopez. He also displayed some poor effort getting back on defense after a turnover which led to a Milwaukee transition three. Even on the offensive side, Claxton wasn’t sharp. The two-man game between him and Harden wasn’t sharp all night and he had difficulty catching passes in traffic.

As much excitement as there was over Claxton getting the start Tuesday, it was quickly dashed by a rather poor opening performance. Even with the loads of potential Claxton has it’s clear he still has a ways to go.

One of the consistent hot button issues fans had with Nash last season reared its ugly head again in the season-opener. Even just from the starting lineup that was rolled out. Although it was a starting unit that many fans seemed to approve of, it was still a unit that had never played a single minute together. And unfortunately for the Nets, it showed. The early game struggles on offense showed a clear sign of lack of chemistry amongst that particular unit. Patty Mills as the first guy off the bench was probably the only thing Nash did right in terms of substitutions.

Jevon Carter, someone brought in for his defensive prowess proved to be an absolute net negative. In 19 minutes, he shot 0-3 from the field and was a team-worst -29 in plus/minus. It begs the question, with the team struggling on offense outside of Kevin Durant and Patty Mills, could Cam Thomas have gotten some minutes just to give the offense a shot in the arm The eye-popping thing of note was the complete absence of Bruce Brown from the game until garbage time. A player that was such an integral part of Brooklyn’s success last season not entering the game until it was over is head-scratching, to say the least. Claxton struggling on the boards throughout the night also makes it puzzling as to why Paul Millsap only accumulated five minutes of gameplay.

Obviously, the first game isn’t the time to panic over rotations and as we saw with this team last year it will take a little while before the rotations really get solidified. However now in year two, the expectation for Steve Nash is to get these things figured out sooner rather than later.

Overall, it was apparent the Bucks just wanted the game more. It could have been the energy from the ring ceremony or the drive to prove the playoff win over the Nets wasn’t a fluke. But it was the little things that were huge difference makers in this one. For starters, the turnover bug seems to still be with the Nets. Brooklyn had 13 turnovers to Milwaukee’s 8 and they seemed to come either when the Nets were trying to make a run or when the Bucks were making one of their own. Body language and effort were also noticeable things. Too many times when a Nets player wouldn’t get a call they would stop to argue with the refs and wouldn’t bust it down the court to get back on defense.

As mentioned before the Nets struggled mightily on the boards. The Bucks outrebounded Brooklyn 54 to 44, but it honestly felt like more. The two teams actually shot pretty similarly from the field and Brooklyn actually shot over 53% from deep. But add up 10 more rebounds with 5 fewer turnovers and that’s 15 extra possessions for the Bucks. It’s very difficult to win when the opponent has that many more chances to score. Lastly the most frustrating of the little things is free throws. The Nets shot a measly 57% from the charity line compared to 78% for Milwaukee. Giving away points at the line is also a recipe for disaster and so was the case in this one.

Next Up: Brooklyn travels to Philadelphia to take on the Sixers (Friday, 7:30 PM ET)