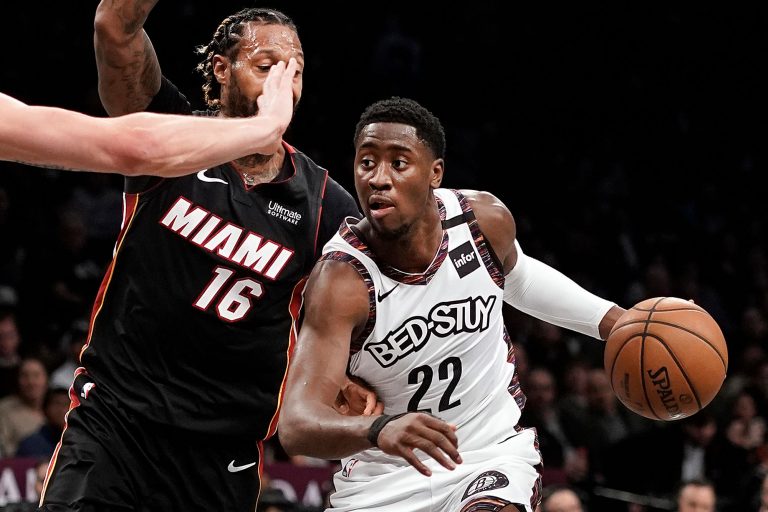 Saturday night saw two teams in playing the 2nd half of a back-to-back. The Nets coming off an embarrassing loss to the lowly Hawks while the Heat were fresh off a win against the playoff-bound Mavericks.

The game started similarly to how it did in Atlanta with both teams trading baskets early, just not as high scoring. Active early for the Nets was Jarrett Allen who had six points and three rebounds in the first six minutes of the game. Both teams struggled to find offense early on however as both clubs shot 44% from the field in the quarter. Brooklyn would jump out to an early 15-10 lead but a 7-0 Miami run saw that lead disappear. The teams would go back and forth as there were seven lead changes in the first but ultimately the Nets took a four-point lead into the second.

In an almost frustrating déjà vu the Nets 2nd quarter woes carried over from the previous night. The pace of the game certainly picked up as both teams had some early transition baskets and exchanged a couple of threes. Midway through the quarter though the Nets offense went stagnant. This allowed Miami to lengthen their lead. The Heat would hold as large as a nine-point lead in the quarter, ultimately outscoring Brooklyn 33-22 in the frame. A couple of Garrett Temple buckets toward the end of the quarter trimmed the deficit to five, however, a Goran Dragic circus shot at the buzzer pushed the lead back to eight at the half.

The second half for Brooklyn didn’t start off as they would hope. Miami came out firing from deep connecting on a couple of threes. Surprise rookie sensation Kendrick Nunn started heating up in the quarter, scoring nine points on 4-5 shooting. Brooklyn’s offense continued to be stagnant. Every time the Nets would cut the Heat’s lead down, Miami would respond with multiple buckets in a row.

Brooklyn’s struggles to produce offense would carry over into the 4th quarter as the Miami lead would blossom to 14 points and the Nets seemed to be on the verge of another blowout loss. However, a 9-0 spurt by Taurean Prince and Joe Harris put the Nets back in the ball game. A Kendrick Nunn 3-pointer with just over two minutes put Miami up 112-103. Brooklyn would respond with another 7-0 run to make it a 112-110 game.

Documented Nets killer Goran Dragic would then hit a tough step-back with 13.7 seconds to put the Heat up four. Joe Harris cut the lead to one with a quick 3-pointer. After Jimmy Butler hit one of two from the free-throw line, the Nets had a chance to tie or win the game. Brooklyn put the ball in Spencer Dinwiddie’s hands however an errant pass to Wilson Chandler ended Brooklyn’s comeback hopes. Brooklyn would fall in heartbreaking fashion 116-113.

Leading the way for Brooklyn once again was Spencer Dinwiddie who collected another double-double with 25 points and 12 assists. Joe Harris added 20 points including going 5-9 from 3-point range. For the Heat, they had a balanced scoring attack with Kendrick Nunn leading the charge with 21 points and Bam Adebayo/Jimmy Butler adding 16 points each. Goran Dragic poured in 19 points and 10 assists off the bench as well.

The Nets have obviously hit a wall. They’ve now lost four straight games and are reverting back to the team we saw when they lost seven straight games back in January. The offense looks lost at times and the defense, which had been very good throughout the month of February just can’t seem to get a stop when they need one. It seems as if the Nets are just finding new ways to lose. It’s getting dangerously close to choosing between phoning in the season or continuing their playoff aspirations.

Brooklyn has gotten little to nothing from guys such as Garrett Temple and Taurean Prince when they’ve needed them down the stretch. The reluctance of Kenny Atkinson to insert Rodions Kurucs into the rotation continues to be a head-scratcher. And to top it off Caris LeVert’s hot play has cooled off the last few games. With the Celtics and Grizzlies coming up for the Nets it’s hard to see where their next win comes from, especially if they continue to play the way they are.