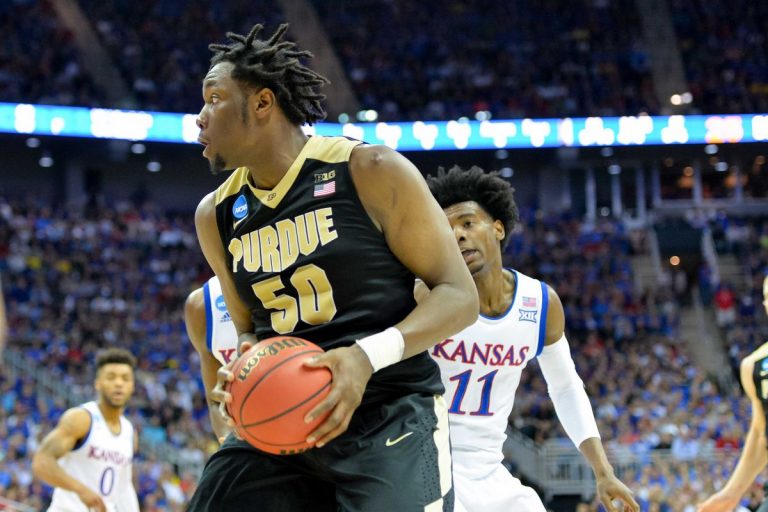 Brooklyn Nets Should Focus on Bigs in NBA Draft, not Free Agency

True centers have become a dying breed in the NBA. Thanks to the Golden State Warriors under Head Coach Steve Kerr, small ball is taking over as a prominent force that can propel a team to success. The Brooklyn Nets have begun to adapt to this ever-changing NBA atmosphere, though they have yet to strike a balance between using small ball effectively and not becoming a liability on the glass as a consequence.

In an interview with Nets Magazine on YES Network, Sean Marks has emphasized upgrading at the 3 this offseason. However, Marks has also stated that he’ll be looking at everyone, and for good reason. After a 20-win season, the Nets could arguably use a boost at every position, and even in a small ball-dominant league, bigs should not be overlooked. We’re in for another roster shakeup, and it’d be a major disappointment if Brooklyn doesn’t bring in someone new to back Lopez up at the 5. No offense to Justin Hamilton.

(For the time being, the Nets upgrading at center means finding a formidable backup behind Lopez. Only the Almighty knows whether Brook Lopez will retire as a Net or whether the Nets will decide to pull the plug on him.)

Currently, Lopez and Hamilton are the only two centers on the Nets’ roster. While that might sound impressive from a size standpoint (after all, they are both twin giants standing at 7 feet), Nets fans are all too familiar with their deficiencies. Lopez, despite committing all nine years of his career to the team, has often been at the brunt of criticism for his lack of rebounding capabilities, which only further supports pundits’ wishes for the Nets to move the big man.

The 2016-17 season was particularly poor for Lopez on the boards. He dropped from averaging 7.8 per contest the prior year to just 5.4 this year (which might have to do with him spending a lot more time on the perimeter). His counterpart, Hamilton (who’s also reputable for being a three-point marksman), does not provide much force on the glass either. The 27-year-old averaged only 4.1 rebounds per game this past season in Brooklyn.

In general, there aren’t many centers in the NBA who can “do it all” — score, rebound and shoot consistently from long range. Many players such as Lopez can provide two of those three things at a respectable level, but few can provide all three. Names like DeMarcus Cousins, Marc Gasol and Karl Anthony-Towns come to mind for players who can do all three, though they are the outliers based on the direction the NBA is heading in.

To their credit, the Nets are more likely to see success by pairing Lopez in lineups that have another player who can clean up the glass in place for him. Trevor Booker and Rondae Hollis-Jefferson (who replaced Booker as the starting power forward in the second half of the season) actually led Brooklyn in rebounding this past season, with eight and 5.8 per game, respectively. It wouldn’t hurt for the Nets to move further in this direction of having a dominant rebounder at the 4, but they’ll need the right pieces in place for this to work effectively.

It’s absurd to think Lopez will suddenly turn into the rebounding threat the Nets need, though it would be helpful for the Nets to acquire a backup this offseason who could get the job done on that end. Still, when looking at potential free agent targets, the options for talented rebounding centers are as barren as they can get. Brooklyn has been tied to some 5’s on the market this summer, but none exactly jump out at you as guys who could make up for the Nets’ rebounding flaws.

Celtics big man Kelly Olynyk would be able to add a three-point shot to the Nets’ offense, but won’t be able to get the job done in Brooklyn as a subpar rebounder who “is consistently out muscled for boards by opponents that do not hold a candle to him size-wise.” Not to mention, he would come at too hefty of a price tag. (Sorry Kevin O’Connor, it’d be a travesty if Kelly Olynyk signed a max deal with the Nets.)

The price tag is the biggest issue if the Nets try to go after a big in free agency (even with all the wiggle room they have), and the Nets’ cap space could probably be better spent elsewhere. After all, they’re expected to throw maximum offer sheets at restricted free agents again this offseason. That’s why Brooklyn could possibly have more luck by swinging at a big in the Draft. This year’s draft class is loaded with lanky power forwards and centers who can provide the Nets with the rebounding skills they desperately need.

With two first-round picks in the 20’s, the Nets will have a plethora of options to choose from. The line gets a bit tricky for whether Brooklyn will go down the route of selecting a tenacious power forward or center (or even both!), though either option can only help. As Christian Milcos noted on Episode 3 of the Brooklyn Revolution Podcast, many draft prospects are listed as power forwards/centers, and some could even be used as stretch 5’s.

For reasons already discussed in this article, I’ll bring up both power forwards and centers in the Draft as viable options for the Nets. Some big men draft prospects the Nets have been linked to include Caleb Swanigan, TJ Leaf, Anzejs Pasecniks, Isaiah Hartenstein, Ivan Rabb and Bam Adebayo — who are all decent, if not excellent, rebounders.

I’m particularly high on Swanigan and Pasecniks, and will vouch for the Nets to use their two first-rounders on the Boilermaker and Latvian. Swanigan, with his 7-foot-3 wingspan and 247-pound frame, can provide rebounding and hard defense to a Nets team that is heavily lacking in those categories. As for Pasecniks, the Ringer’s Kevin O’Connor called the center “not an impactful rebounder on either end of the floor,” though The Step Back’s Trevor Magnotti noted that Pasecniks uses his 7-foot-2 frame well when rebounding and is an “acceptable” rebounder due to his defensive rebound rate of 18.3 percent this season. That’s good enough for me, and both players would certainly be major additions to address the Nets’ needs.

It’s slippery regarding where the two will end up being selected in the Draft, though for quite some time, Swanigan was projected to go in the mid-to-late 20’s in many mock drafts. Currently, the Ringer has Swanigan going at No. 29, while NBADraft.net and DraftExpress have him going in the early second round (No. 33 and No. 41, respectively).

Meanwhile, the highest I’ve seen Pasecniks in mock drafts is No. 26 on DraftExpress, while The Ringer and NBADraft.net still have him down as a second-round selection (No. 39 and No. 46, respectively). Pasecniks’ draft stock could be rising due to footage that emerged last week on Pro Day courtesy of DraftExpress, which would explain why DraftExpress is the only one out of the three sites discussed here that has Pasecniks slated to go so high. Still, based on these mock drafts, it appears the Nets will have a good shot at getting both players with the No. 22 and No. 27 picks.

I’ve been a huge advocate for the Nets to reform their roster to fix their rebounding woes (I’ve spoken about it on two Brooklyn Revolution Podcast episodes). So regardless of who the Nets end up targeting in free agency or selecting in the Draft, I hope at the very least, we’ll see a very different rebounding climate next season (for the better, of course).