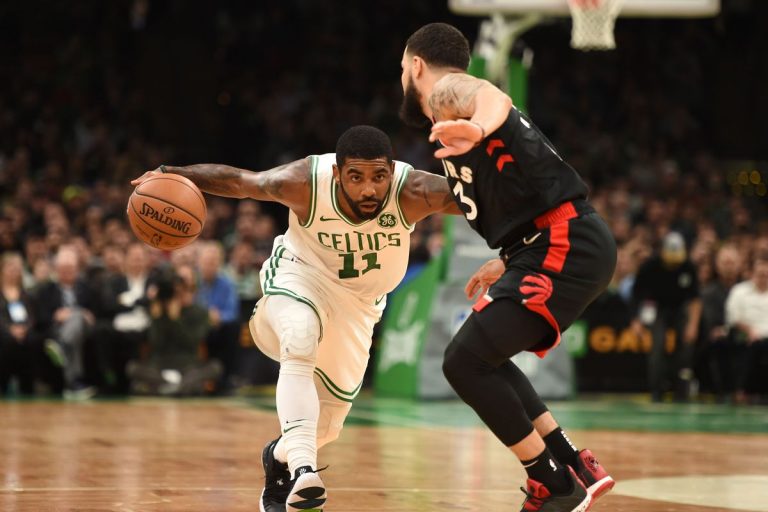 Nagging injuries, personal loss, and an embarrassing exit from the playoffs: last season was an emotional roller coaster for Kyrie Irving and the Boston Celtics.

Despite championship hopes and a trip to the Eastern Conference Finals one year prior, Kyrie and an incredibly talented Celts crew never meshed on the court. Young guys felt they deserved more, and veteran leadership failed to steady the rapidly sinking ship.

Rising stars Jaylen Brown and Jayson Tatum found their workload scaled back with the return of Gordon Hayward, while breakout playoff performer Terry Rozier was forced back to the bench to make room once again for Irving.

It was always going to be challenging for head coach Brad Stevens to keep everyone happy, and Boston eventually imploded. After stealing the first game of their second-round series against the Bucks on the road, Milwaukee put on an absolute clinic, handing the Celtics a gentleman’s sweep and a one-way ticket to an early offseason.

Fast-forward two month. The Brooklyn Nets have officially signed Kyrie Irving and Kevin Durant to a combined $305 million over the next four years. Not only that, but Brooklyn has orchestrated the superstar pairing by shipping D’Angelo Russell to the Golden State Warriors in a sign-and-trade deal that brought Durant to BK.

With Nets basketball just three weeks from the first tip, how does six-time All-Star Kyrie Irving fit into Brooklyn’s plans for the upcoming season? Can he exhibit quality leadership in a way that was missing during his tumultuous tenure in Beantown? And can he lead a playoff charge without Kevin Durant to help carry the load?

Let’s first address what appears to be cut and dried. Kyrie Irving will most definitely be the starting point guard and the centerpiece of the Nets offense from day one. Expect a heavy helping of minutes, scoring, and assists from the former number one overall pick.

Don’t be surprised if he leads the Nets in numerous statistical categories in 2019-2020. Kevin Durant will likely miss the majority if not the entirety of the season recovering from an Achilles injury, and that means more responsibilities for Uncle Drew.

Similar to his time in Boston, Kyrie will share the floor with another ball-dominant wing in Caris LeVert, and be followed in the rotation by super-substitute Spencer Dinwiddie. Although that may signal red flags, here’s why you shouldn’t worry.

Unlike in Boston, Brooklyn is a team largely devoid of lottery picks and massive egos. Whereas Brown, Tatum, and Rozier came into the league with expectations to become franchise cornerstones, LeVert and Dinwiddie were rather unheralded prospects who had to scratch and claw their way into NBA lineups.

And while Irving is traditionally viewed as a score-first guard, he’s more than capable of setting the table for his teammates and operating as an off-ball threat. Last season, the ninth-year pro averaged a career-high 6.9 assists per game, drained a career-high 99 catch-and-shoot three-pointers, and flirted with achieving the 12th 50-40-90 season in league history.

If his ability to function without the rock in his hands was in question, it shouldn’t be. We watched him successfully, though begrudgingly play second fiddle to LeBron James for three seasons in Cleveland. Now, for the first time in his career, he’ll be in full control of when he decides to take a backseat, and his new teammates shouldn’t give him any hassle.

Some of the blame for the meltdown that happened in Boston has to fall on the shoulders of Kyrie Irving. He was their lone superstar and de facto leader as a product of being the only player to have played a major role on a championship team.

We all know he could have done better, and Irving admitted as much when he spoke to the press on Brookly Nets media day last Friday. Owning up to your mistakes is the first step in bettering yourself, and that’s exactly why I believe Kyrie will be a better leader than ever before.

Whether or not he can lead the Nets to the playoffs is another debate. The Bucks, Sixers, and Celtics look like surefire locks to claim the top four seeds out East, and the Raptors, Pacers, Heat, Magic, and Pistons are primed to compete with Brooklyn for the final five spots in the Eastern Conference playoff race.

Toronto, Indiana, Miami, Orlando, and Detroit have confusing roster configurations, but the star players and coaching pedigree to keep up with anyone on any given night. As for the Chicago Bulls and Atlanta Hawks, don’t count them out. Their stockpile of ridiculously talented youth alone makes them a wildcard for a postseason berth.

So, where does that leave Kyrie Irving and the new-look Nets within the playoff picture?

Realistically, somewhere between the third seed at best and seventh seed in the worst-case scenario. Brooklyn is ripe with two-way playmakers, possesses the depth to trot out a ten-man rotation every game, and is too good to miss the playoffs with Kyrie and head coach Kenny Atkinson at the helm.

Fans may not get an opportunity to watch Kevin Durant go to work in year one, but Kyrie Irving will put on a show that should have us all drooling at what the future has in store for Brooklyn Nets basketball.