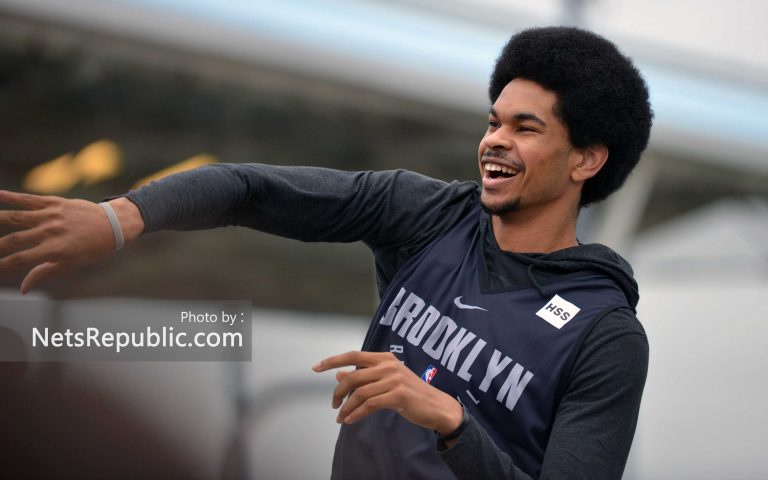 What Did We Learn In Brooklyn’s Preseason Opener?

On Friday, Brooklyn Nets basketball returned for the 2019-2020 season. Sure, it was the preseason. Sure, the game wasn’t against an NBA team. And sure, the playing time distribution was nothing like we’ll see when the regular season rolls around. But it was the first appearance of this new iteration of the Brooklyn Nets, and there are still things we can take away from getting to see this team on the floor. Here are some of key takeaways from Brooklyn’s 137-89 over Sesi Franca.

Taurean Prince should be the starting four

One big question all Summer has been about what Brooklyn will do with the power forward position. It was the biggest question mark for the team last season and with Kevin Durant expected to miss all of the 2019-2020 season, the position remains a serious question mark this year.

But Friday’s game confirmed to me what I’ve been thinking this whole time: Taurean Prince needs to be the guy who mans that starting role.

With Jarrett Allen and DeAndre Jordan — more on them later — as the team’s center combination, Brooklyn needs a stretch four to help with spacing.

Prince brings so much consistency to the court for the Nets, which is something they’ve lacked in recent years from their three-point specialists. While the additions of Durant, Irving, and Jordan were the biggest moves this offseason, the addition of Prince might be next up on the list of important things.

And with Rodions Kurucs facing possible legal troubles stemming from an alleged domestic violence issue and Wilson Chandler facing a PED suspension, the team needs someone like Prince more than ever.

David Nwaba needs to have a role on this team

Count me as someone who was really excited about the addition of David Nwaba.

Nwaba is a multi-position defender who finishes well, which is a combination of things that this team can definitely use. While being on his fourth team in four years could be considered a negative, Nwaba’s shown a lot of promise in his previous stops.

He’s not much of a shooter, but he makes up for that by playing hard and finishing good near the hoop. He’s shot over 60% from inside of three feet in each of his NBA seasons.

On Friday, Nwaba was just all over the place. He played 23 minutes, scoring 18 points on 7-for-8 shooting and was 2-for-3 from deep (hmm!). He added five rebounds and four assists. If he can continue to be one of those do-everything players for this team moving forward, he’s going to have a spot in the regular season rotation.

I think we have a new Lob City.

I should have written down how many lobs I saw during this game; it seemed like there were an infinite number of them, with one of Brooklyn’s ball-handlers tossing the lob up to one of the centers over and over.

Allen wasn’t always able to dunk those lobs down — the first two plays of the game featured a lob to Allen that he grabbed and then landed with — but having centers who can get to the rim is a great step towards getting solid production at the rim.

In addition to the lob part, Brooklyn will have two very good screeners to help them run an offense that’s heavy on screening:

Last season, I wrote about how Allen and Ed Davis were used as screeners to help the Nets score. Both players should be able to set strong picks that free up the ball-handler to drive to the basket, but also can then roll to the hoop themselves.

Allen got the start on Friday, with Jordan coming in off the bench. That’s probably what we’ll see in the regular season, but Kenny Atkinson’s devotion to keeping players fresh means we’ll see more of Jordan than we’ll see of most backup centers around the NBA, especially when you consider that we’ll rarely — if ever — see both Allen and Jordan on the floor together unless Allen has secretly spent the entire offseason expanding his range out to the arc.

Claxton didn’t see the floor until the fourth quarter. The rookie had some really good minutes when he was on the floor late, but I just don’t see him having much of a role during his rookie year. He’s got the versatility to be a kind of point center at times, but that’s also not really how this team’s going to be playing.

Maybe I’m wrong, but I’d expect Claxton gets a lot of run in Long Island this year, no matter how good he’s looking this preseason.

But oh, it’s really hard to ignore how good he looks when he does things like this:

What Claxton brings is such a departure from what the other bigs on this team bring. None of the other bigs can run the floor like Claxton can. In college, he ended up being used as Georgia’s de-facto point guard, and we see those skills on display in the above clip.