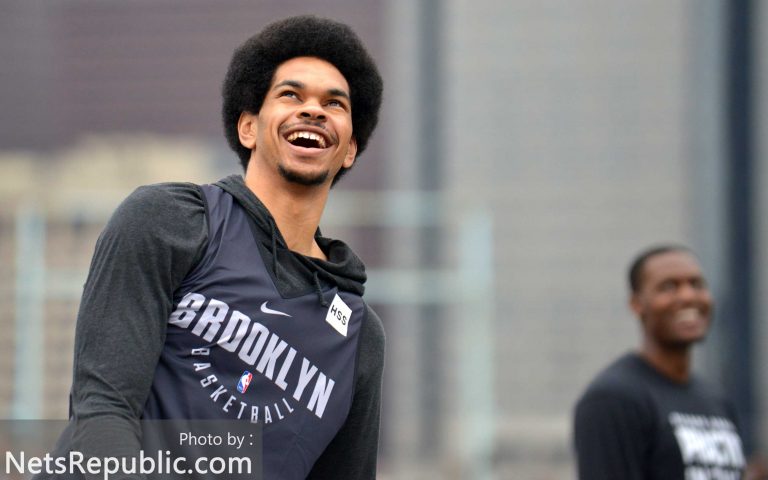 Brooklyn Nets’ “Next Man Up” mantra personified through Dinwiddie and Allen, amongst others

Put down that bottle of Jameson, Brooklyn Nets fans—there is no longer need to drink ourselves into a state of inebriation and delusion about the state of this team; they have now won six of their last eight games behind the fantastic play of Spencer Dinwiddie and Jarrett Allen, amongst others (namely Joe Harris and Garrett Temple).

November 14-29, a span of fifteen days, has seemingly completely altered the trajectory of this team in the 2019/20 campaign. On the 14th of this month, the Nets were sitting at 4-7 after a stomach-turning loss in Denver that also saw a double-digit lead blown for the second time in as many games with news later breaking that Kyrie Irving was to miss time with a shoulder injury. Alongside the news of Caris LeVert‘s injury, just two games prior, there was reason for concern.

Now that is not saying that it was the general consensus that the season was lost—Nets Twitter has a little more sense than that—but things were not panning out in accordance with offseason predictions. This young campaign was not going well, the Nets desperately needed player(s) to step up with the injury bug of such significance and in a stroke of good fortune, that is exactly what they have gotten.

Spencer Dinwiddie, your newly-crowned Eastern Conference Player of the Week, has been sensational with Kyrie Irving down with injury, averaging 24.5 points, 7.8 assists, and 3 rebounds in his last 8 games.

His play has flowed smoothly with Kenny Atkinson’s motion spread offense, which predicates heavily on ball movement, as he has done an amazing job in initiating the offense and creating for others—illustrated by his assist to turnover ratio in the last four games (5.83).

Simply put: Spencer Dinwiddie has played like an all-star when the Nets have needed him the most, personifying the team’s mantra, “Next Man Up.”

His aforementioned passing abilities have benefitted those sharing the court with him, especially Jarrett Allen (Allen is shooting 71.9% from the field when receiving passes from Dinwiddie).

Expectations for Jarrett Allen are high and for good reason, he has shown glimpses of being the most dominant player on the court, leaving many to pin him as a franchise cornerstone for the Nets. He is elite as the roll man in pick and roll sets—a staple of the Brooklyn Nets’ offense—and has a really nice combination of size/athleticism to finish around the rim.

What has concerned many is a lack of mental toughness or an inability to hang tight with more physical bigs the game has to offer. I am definitely not the first to advocate for a little swagger in “The Fro’s” game, but it is not exactly easy to just ask a player to alter his mental approach.

However, call me crazy, maybe I’m just grasping at straws, maybe the lack of sleep from studying for Finals combined with probably unhealthy dosages of Melatonin have taken their toll, but Jarrett Allen has been playing meaner lately, with a chip on his shoulder, he’s been aggressive in the best way imaginable.

Tristan Thompson, a former schoolyard bully of Allen, got abused in the interior by the 21-year-old—as illustrated by Allen dropping a 20/20 in his grill. Enes Kanter, another former tormentor of our favorite rim-protector, did nothing of significance in comparison to Allen’s 17/14 and 14/11 efforts against his Celtics in back to back outings.

Allen is going to take your lunch money and drink your chocolate milk, he does not care that you’ve been looking forward to it all day, it is his now. He has been an absolute force on the glass, has refused to give up positioning, and is finishing around the rim with ease in comparison to early-season struggles.

At this point, it really is not to anyone’s genuine surprise that Joe Harris has elevated his game when called upon. It is what he does. He makes the right play, at the right time, here, look at this off-hand bounce pass to Jarrett Allen when he was doubled at the top of the perimeter, I love this guy!

What has come to a shock of some, however, is Garrett Temple’s significance to this roster on the court. In a similar manner to Joe Harris, he has his uncanny knack of making a play when the Brooklyn Nets need it the most. Be it to halt a run or to cap off a run, it seems he flourishes in such moments.

He brings grit and intensity to the Nets’ backcourt defensively and has shot the ball at an efficient clip as of late (45% over his last 5 contests). He a veteran presence this roster needs, his value can not be understated.

Following a lackluster 4-7 start, the Brooklyn Nets needed to execute on their “Next Man Up” mantra and they have done just that, going 6-2 despite being shorthanded. Now they await reinforcements sitting at the 7th seed in the Eastern Conference, there is plenty to be optimistic about.