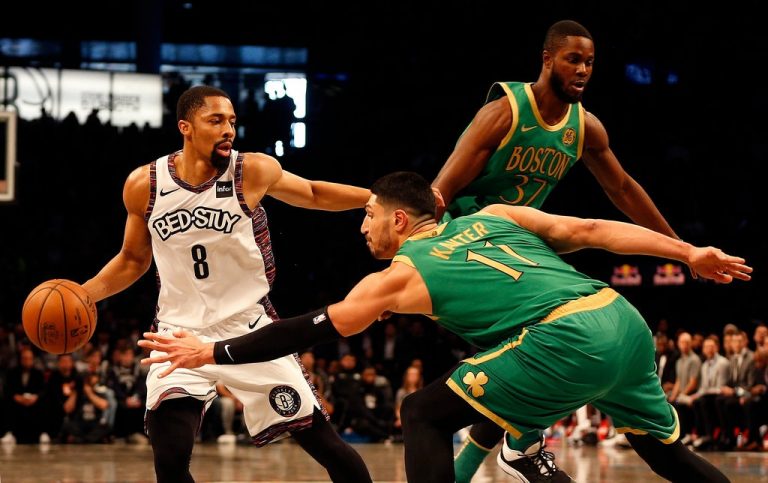 Brooklyn got one got one back on Boston the day after Thanksgiving. Led by another superb outing from Spencer Dinwiddie, the Nets defeated the Celtics 112-107.

Dinwiddie continued to dominate. The point guard is making a serious claim for a maiden All-Star berth, as he finished with 32 points (6/8 3PT), 5 rebounds, 5 assists, 2 steals and 2 blocks. He set the tone early with some great defensive plays.

His afroed teammate was full of praise for his good friend.

“Spencer, he can do that whenever he wants to. He’s super talented, super skilled, super athletic. I think this could be a normal night for him moving forward.”

With Kyrie Irving’s return on the horizon, Coach Atkinson is going to have to find a way to integrate this version of Dinwiddie in a way that compliments both players.

Speaking of the man with the ‘fro, Jarrett Allen was super again. The young big man still found a way to impact the game despite some foul trouble. He finished with another double-double (14 points, 11 rebounds, 1 assist, 1 steal, 1 block) and played some tremendous perimeter defense to boot.

The starters continued to get the job done. All five of them finished with double figures and were a positive or neutral in plus/minus. My boy Joe Harris (as always) had some big moments.

The Nets also limited Kemba Walker to 17 points on 6/19 shooting. After going off for 39 a few nights earlier, Atkinson and the team decided to make some adjustments to make things a little more difficult for the All-NBA point guard. Temple noted the changes post game:

“We were a little higher on the pick and rolls so Kemba didn’t get as many threes. Credit the coaching staff for changing that game plan and then credit JA and DJ for being able to give up a few layups, but for the most part keep him off the 3-point line.”

DeAndre Jordan made some big plays in his return off the bench. He pulled down 11 rebounds and posted 8 points in 23 minutes of court time. Most importantly, he looked springy, spry and engaged.

Brooklyn’s in a decent spot having been without their three best players for all or significant chunks of the season so far. To be above .500 and defeat a contending team in the Celtics shows the character of the team. Atkinson seemed pleased with where the team stands at this early stage.

“I do feel good momentum. I feel like the group’s coming together from a spiritual, chemistry standpoint. Especially, I think this was important. Can you beat a really, really good team when you’re shorthanded. I know we were home. I know it was a noon game, but that gives us a lot more confidence.”

There was a nice moment with Kyrie Irving and a few of his teammates postgame which really warmed the heart.

Now, let’s put all of the Celtics stuff to rest. At least until March 3 when the teams are set to battle again.