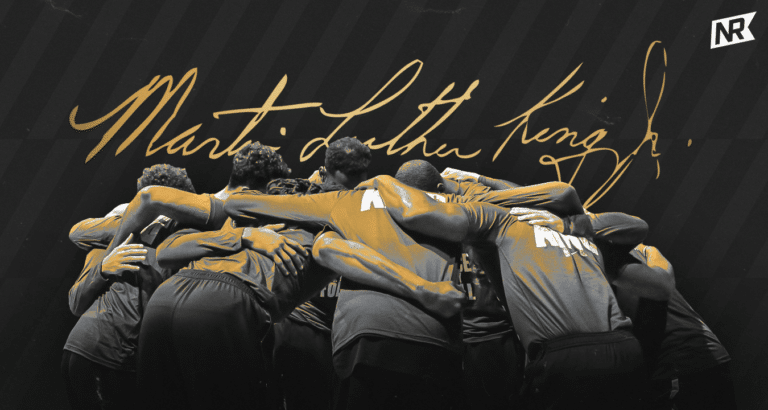 In celebration of the life, legacy, and activism of Dr. Martin Luther King, Jr., the Brooklyn Nets hosted a panel exploring the role of athletes, and other sports entertainment professionals, in the movement toward social justice and the fight against systemic racism.

The panel, which took place before the Nets took the court against the Bucks on Martin Luther King Day, was hosted by Ally Love, the Brooklyn Nets’ in-arena content host, and featured Houston Texans quarterback DeShaun Watson, as well as ESPN analyst Ros Gold-Onwude, who covers both the NBA and WNBA.

Also joining the panel were Barclays Center general manager Adina Erwin, and Brooklyn Nets’ parent company BSE Global Executive Director of Diversity and Inclusion Jackie Wilson, II. The panel brought a varied perspective on a number of subjects, such as being black in the predominantly white sports-entertainment field, and the role of athletes and the wider industry in social justice.

To kick things off, Ally Love asked the panel for their response to the tired old adage, “stick to sports;” in other words, how do they respond to those who would silence them, who maintain that athletes should just “shut up and dribble.” “I think the obligation is to do just the opposite,” said Adina Erwin, who said that fans who celebrate the triumphs of black athletes ” … need to be aware of the whole picture, of the inequities and injustices that exist in [our] communities.”

“At the end of the day, we still live like normal people,” DeShaun Watson added, emphasizing that African-Americans in sports speak out because issues like police brutality and other instances of systemic racism affect them. “I came out and spoke more [about racial inequality] this year because it’s my life. It’s my reality. I think that’s what people need to recognize: This is our real life.”

“What I have found especially, this summer, when a lot of athletes found their voice, is that using that voice is a way of taking back control of their body, and their story,” Ros Gold-Onwube elaborated. Black athletes, says Gold-Onwube, can often be made to feel like “minstrels, being told to play for money, and entertain.” Advocacy offers a way for athletes to reject that, asserting their agency as individuals while making a real difference for their community.

Gold-Onwube offers another layer to this: Black athletes speak out for people like them because oftentimes, no one else will. “A lot of times, these athletes represent communities that don’t always have spokespeople … You don’t often get the chance to hear from someone who was wrongfully imprisoned, or beaten due to police brutality. Athletes do have that platform.”

Jackie Wilson echoed Gold-Onwube, asserting that athlete-activists have a tremendous influence on politics. “Athletes impact us in so many ways,” said Wilson, “They impact how we dress, they impact what music we listen to, and they do impact who we vote for…An athlete’s voice is extremely powerful and extremely timely.”

“I absolutely think we saw a huge impact from the WNBA that rose the profile and visibility of Raphael Warnock,” said Gold-Onwube, referencing efforts of the Atlanta Dream and other WNBA teams to support and promote the candidacy of now-Senator Raphael Warnock, who ran for Senate against controversial Dream co-owner Kelly Loeffler. “The voices of these women for the WNBA absolutely made a difference. And so, it’s not just for show.”

DeShaun Watson, speaking on the impact athletes can have on society, brought up the ability for athlete-activists to start conversations, especially among their youngest fans. “The words, and the symbols, and the signs, the things they see on the football field, or on the jerseys or the helmets. And it provokes questions. The younger generations, they see that, and they ask questions…They Google something, they Google a name, they Google ‘Black Lives Matter’ … And so now, it gives them access to what’s really going on.”

On the organizational side, Jackie Wilson, who leads BSE Global on Diversity and Inclusion, spoke about the role teams and organizations play in supporting social justice causes. In addition to amplifying the voices and activist initiatives of their players, Wilson said, organizations should look to “work themselves to push for the change in society that their players are looking to achieve.” Wilson expressed his pride in working for BSE and the Nets, organizations he feels have taken concrete steps towards creating a better future. “We have worked hard to amplify player voices, and separately, Joe and Claire Tsai have set aside a $50 million dollar social justice fund,” a fund which too is distributed to social justice causes over the next 10 years.