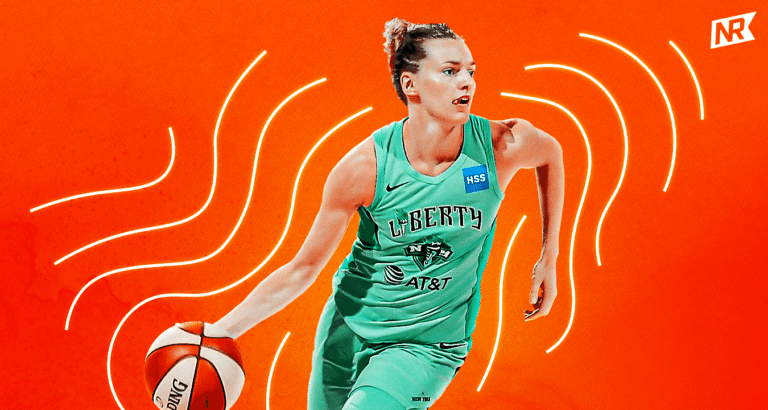 Happy Birthday, Marine Johannes! 3 Reasons Why We Can’t Wait for Her Return

It’s been a while since New York Liberty fans enjoyed the antics of Marine Johannes. NetsRepublic shows you what you’re missing.

Someone with the initials of MJ and bearing the no. 23 on their jersey often causes New York basketball fans to quiver in fear. Now, it draws cheers and admiration, and those same fans certainly hope there are many more to come.

It’s been a long time since New York has engaged in such festivities, as Marine Johannes, who turns 26 on Thursday, has kept her basketball endeavors mostly overseas since the end of her debut WNBA season in 2019. But the New York Liberty shooter has been on the mind of many in the interim, and many hope that she’ll be making her way back once the WNBA announces its 2021 plans.

The Lisieux, France native averaged 7.2 points and 2.4 assists during an abbreviated debut. She inked a multi-year deal with the Liberty last February but opted out of the WNBA’s bubble proceedings in Bradenton, Florida. Despite her absence, her name was constantly mentioned amongst New York representatives.

“Marine is one of the most underrated, talented players in this league,” head coach Walt Hopkins said during his introductory press conference last year. “She can do things with the ball, with the pass, with her pull-up jump shot from half-court. Marine is a special player.”

“(We) are very excited that she is committed to the Liberty long term,” general manager Jonathan Kolb added upon her re-upping. “Marine’s ability to create highly efficient shots for herself as well as her teammates blend seamlessly with the system our coaching staff plans to implement.”

Why should New York fans be so excited for Johannes’ return? NetsRepublic investigates…

If the New York Liberty made one thing clear last season, it’s that they love to shoot the three-pointer. Even in a shortened season, the Liberty’s propensity for the triple made a little bit of history, as their 602 attempts were ninth-best in the team’s quarter-century history.

Johannes knows exactly what it’s like to be shooting in a shortened season. Despite playing only 19 games in her debut campaign, Johannes put up 66 triples, fifth-best on the team. Her .379 percentage was a runner-up amongst those with at least 50 tries, behind only fellow potential returnee Rebecca Allen. Johannes reached double-figures in scoring in two of her first three New York appearances, a stretch capped off by a 17-point tally in a win over Los Angeles. Johannes was a perfect 6-of-6 from the floor that afternoon.

“She’s a scorer. That’s not going to be an every night thing but she’s able to hit shots. She’s a bounce player. She’s a solid pick and roll guard,” then-Liberty head coach Katie Smith said of Johannes at the time. “She’s someone that can stretch the floor and (opponents) have to play her honest.”

With all due respect to Sam Darnold and Daniel Jones…and maybe Josh Allen, as well…the finest in New York passing over the next year could well come from Johannes.

During her time overseas, Johannes has only seemed to improve her ball-handling and offensive magic. She averaged only 2.4 assists in her 2019 opener, but her ability to find the open woman, particularly in tight windows, has dropped jaws in two continents.  Combined with Johannes’ strong speed and athleticism, it creates the type of separation the Liberty desperately needs to create more scoring opportunities.

Welcome (Back) to New York

At the end of the day, Johannes is simply missed by not only fans and management, but her teammates as well.

Say what you will about the brutality of the Liberty’s recent endeavors in the standings, but the team has managed to tough it out through camaraderie and unity along the way. Despite the brevity of her New York career, Johannes managed to quickly leave a mark on her teammates.

One of the more endearing sights of the 2019 season was Johannes’ getting help from her locker neighbor Allen in simplifying questions from reporters after her aforementioned home debut against the Sparks. The relationship between her and Nayo Raincock-Ekunwe also drew smiles, as the pair took in a game at Yankee Stadium while Johannes conjured up tickets to a showing of Harry Potter and Cursed Child. Still working on her English, Johannes made her feelings on New York clear after the showing against the Sparks.

“It’s really nice. I like the atmosphere here,” she said. “I’m feeling good. I’m happy to be here.”

Johannes kept the good vibes rolling on the court for her new teammates. She capped off her rookie campaign with consecutive career-highs in scoring, tallying 21 and 22 points in back-to-back contests with future WNBA Finals representatives from Connecticut and Washington.

“She’s a scorer, she’s got a swagger to her game that’s a little bit different,” Kia Nurse has said of Johannes. “She brings a European swagger to a North American game that’s a lot of fun to watch. She is confident and I love the way that she plays.”