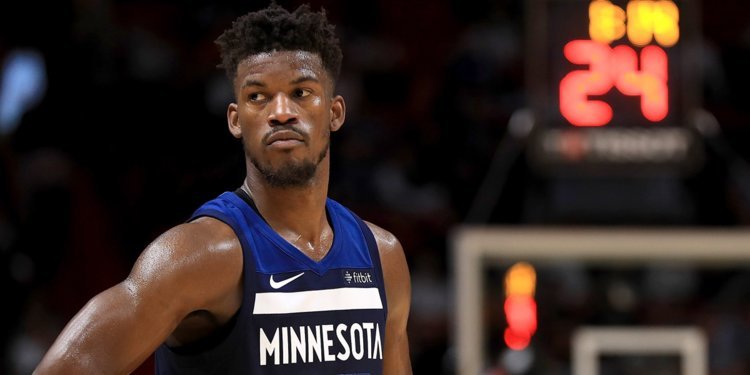 Why the Nets shouldn’t make a move for Jimmy Butler

The Minnesota Timberwolves’ last few years have been weird, to say the least. The prized guys they got after years of being one of the most dysfunctional franchises in the NBA — Andrew Wiggins, Karl-Anthony Towns, Zach LaVine, and Lauri Markkanen (who the Wolves drafted on behalf of the Bulls) —have yet to prove that they care about winning enough to the other things you need to do to win games besides scoring.

After cashing out some of those guys for Jimmy Butler in what appeared to be a coup of a trade last summer, head coach and — for some reason — general manager, Tom Thibodeau has oddly decided to only go after guys whom he coached in Chicago. Given that level of organizational dysfunction, it only makes sense that Butler now wants out, according to Shams Charania of The Athletic.

After all, he’s arguably at the peak of his powers right now and at 29 years old with a lengthy injury history and rough-and-tumble game, he probably doesn’t have many peak years left. To just about everyone’s surprise, including probably their own, the Brooklyn Nets have found themselves on the list of Jimmy’s preferred teams to acquire him. On the surface, a deal for Jimmy Butler looks like a no-brainer move for a team that is still reeling from a disastrous 2013 trade with the Boston Celtics that kept them in the NBA’s basement for years. Once you dig a little deeper, that potential deal starts to look a little funky for the Nets.

The biggest reason why is arguably his age and how that fits within the team’s window. As I mentioned before, he’ll be 29 by the end of this year — which isn’t necessarily old in and of itself — but given how much tread he’s put on his body since he entered the league his body is way more banged up than the average 29-year-old wing. Everything from his maniacal work ethic in the offseason to his time with Thibs in which he regularly was a league leader in minutes played to his max effort style are going to hit him soon, and when they do it’ll be tough to watch.

Especially because his game isn’t built to deal with that decline at all. Ever since he entered the league, he’s been one of the most physical wings in the NBA, regularly bullying his defenders on the way to the basket and throwing himself into the teeth of the defense to try and draw as many fouls around the rim as he possibly can. On one hand, his constant aggression and attacking are huge assets for the Wolves and put all kinds of pressure on the defense. But on the other, he’s going to have a hard time playing like that for much longer.

That kind of aggression takes a huge toll on your body and over the past few years, it’s showed. Even though he works harder on his body than pretty much everyone in the league outside of LeBron James, he’s had a hard time actually staying on the court, playing more than 68 games only twice since his rookie year and last year missed 23 for a variety of different injuries. His injury track record, along with his age and physicality point to a startlingly low shelf-life no matter which team he goes to.

Perhaps the most pressing reason that Brooklyn shouldn’t trade for him is that he’s going to be a free agent next summer and he’s made it clear that it’s going to cost a pretty penny to retain him. It’s no coincidence that every single team on his list–The Los Angeles Clippers, New York Knicks, and the Nets–all have the cap space to sign him to a max deal next summer. What other reason would he have to include some of the most historically losing franchises on a list that effectively details where he plans to spend his prime?

It’s also more than possible that if the Nets do trade for him, he won’t re-sign and he’ll use Brooklyn as leverage to get more money elsewhere. That’s what makes giving up assets for a one-year rental doesn’t make much sense for this team. Even if he does agree in a backroom deal to re-sign with the team, that agreement isn’t binding and he could easily change his mind. Brooklyn isn’t exactly a team for whom a one-year deal would make a ton of sense.

They’re going to be improved next team, sure, but at the same time they won’t be nearly good enough to contend for a title with Butler and the most he could really do is bring them to the 5-8 range in the Eastern Conference. Why would Sean Marks abandon his careful and intentional re-build in order to put the Nets in a situation they were in just five years ago?

Cashing in on assets isn’t a bad thing and is frankly the reason teams like the Boston Celtics and Golden State Warriors expend so many resources trying to collect them. But those teams collect draft picks and young guys with the belief that if they bide their time and wait for for the right deal at the right moment, they’ll be able to cash those assets in for someone who’ll be able to put them over the top. As of right now, Butler isn’t that guy for the Brooklyn Nets and there’s no reason to believe that he will be at any point in the future.