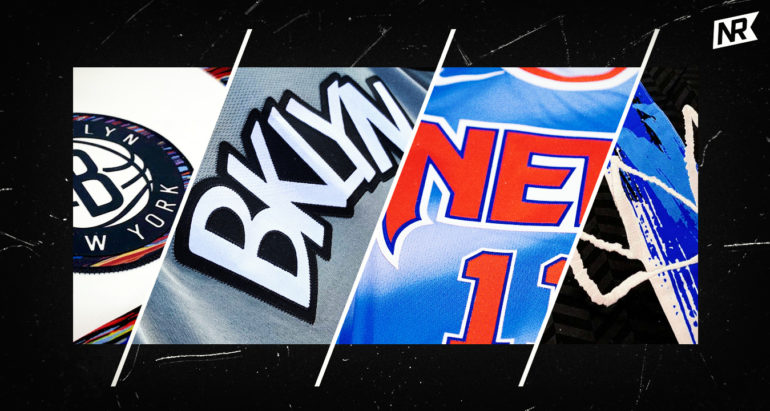 What the Nets’ Next Jersey Editions Should Be for 2021-22

The Brooklyn Nets wore six different uniforms in the 2020-21 season. SIX. That is, in my humble opinion, too many jerseys for one team to have. Even if there were 82 games this past regular season, that’s entirely too many jerseys to wear on the court.

Now, I could make a point about how it’s unfair for fans to be expected to pay over $100 for each of these jerseys, but that’s a different discussion for another time. Plus, no one’s making you buy them.

From the slick photoshoots and hype videos that have been expertly crafted to excite us for the latest drop, to the intricate backstories each new jersey holds, the whole jersey world is something that all fans love. It’s part of the NBA’s DNA.

Each jersey builds from the last. You can either strike gold with a concept and have it become synonymous with the team for years to come, or it falls flat and you’ll never see the jersey darken your proverbial door again.

Brooklyn has already got a rich jersey history (to go along with their rich Jersey history) and their seasonal additions—or “editions” as they’re known—have usually been well-received.

The borough has so much life and such a unique identity that drawing from this well of inspiration leaves jersey designers spoiled for choice when it comes to deciding what exactly to immortalize on the Barclays Center hardwood.

But what’s next? What’s something that’s so quintessentially “Brooklyn” that the Nets could incorporate into next year’s jersey rotation?

Time to dive into the different “editions” of jerseys that the team could consider for the season ahead.

What the team should go for this year? Black and white

The reason why the home team typically wears a white version of their jersey is something that dates back to the days where it’d be unacceptable to expect a visiting team to be able to provide uniforms that aren’t covered in dirt (hence the term “home whites” and “road grays” in baseball).

The black version, for which we have Jay-Z to thank, are the team’s most identifiable colors. So these jerseys are untouchable.

What the team should go for this year? Coney Island

The City Edition is the jersey that’s supposed to be unmistakably “Brooklyn.”

This past season, it was the herringbone-heavy and intensely colorful Jean-Michel Basquiat-inspired creation that was so popular with Nets fans. The late neo-expressionist grew up in the neighborhood of Boerum Hill and visited the Brooklyn Museum of Art as a child, so the borough ran deep in Basquiat’s veins.

For the 2021-21 season, the City Edition needs to ooze “Brooklyn,” but have global appeal. What could tick the box more thoroughly than the “Playground of the World,” Coney Island? A world famous amusement park whose crown jewels include the Wonder Wheel, the Thunderbolt, B&B Carousell, and of course, the Cyclone.

The Nets’ marketing department could have a lot of fun comparing the oohs and aahs, the spills and thrills of the amusement park to the brand of Big Three-led basketball being played on the court. The wooden roller coasters and quintessential Americana attract people from all walks of life. Celebrating that mass appeal speaks to the kind of inclusive fan base the Nets have fostered since I started following the team (albeit from afar) since 2013.

What the team should go for this year? KAWS

Born in New Jersey and living and working now in Brooklyn, Brain Donnelly (aka KAWS) is an artist whose roots are in street art, but has made the leap into fine art and popular consciousness. This is due, in part, to incorporating recognizable cult figures like Mickey Mouse and The Simpsons into his work, and for teaming up to produce incredibly popular collaborations with other brands, such as Supreme, Nike, and Comme des Garçons.

A KAWS-inspired jersey would work on a number of different levels. It takes over the Statement Edition from Eric Haze, whose grey jersey has been worn by the Nets for the past two seasons—one with the Nike swoosh and a year later with the addition of the Jumpman—so continuing the theme of artists with a Brooklyn connection.

It also brings the Nets right up to date with someone who’s cool right now. KAWS Jordan 4 sneakers go for thousands of dollars on the resale market, and with it, has catapulted anything associated with the “XX” signature to command a certain level of cultural capital.

A KAWS x Nets “BrXXklyn” statement edition jersey would be, quite simply, cool.

What the team should go for this year? ’97-98 New Jersey throwback

The 2020-21 season marked 30 years since the release of the blue and red tie-dye jerseys made famous by Dražen Petrović and a rookie Derrick Coleman. They say fashion works in cycles, so the loud colors and bright red lettering fit right into a 2020 aesthetic.

For as long as the Nets made the move from Jersey to Brooklyn, Nets fans have been clamouring for a jersey with “Nets” emblazoned across it. We got that with a sleeved version of the ABA jersey in 2015, a re-jigged remix jersey in 2016, and the Brooklyn Bridge City Edition in 2017, but still we want more.

The Nets’ tie-dye jersey was a great way to kick off releasing throwback jerseys for the Big Three era, but now that they have some momentum, it’s time to bring out the big guns.

In my opinion, the greatest Nets jersey of all time came in the ’97-98 season. The white base with navy blue “NETS” sitting proud across the chest with an outline of red, flanked by a basketball net-inspired motif down each side. Also available in the navy blue or grey version, any of those three would be incredibly well-received.

What the team should go for this year? An updated ’01-02 Finals jersey

For the new season, we need to cast our minds back to another iconic Nets jersey that just so happens to have an anniversary coming up.

Twenty years ago, the New Jersey Nets went 52-30 and booked their place in the NBA Finals for the first time in franchise history. So why not remake the jerseys from those days at the same time the current team has championship aspirations, but with added Brooklyn flavor?

How would Nets fans feel if they remade the New Jersey era jerseys, but replaced “New Jersey” with “Brooklyn”? Add in the black, white, and grey of the current Nets’ color scheme and it would no doubt look incredible, but would Nets fans who remained faithful after the 47-mile move to Atlantic Avenue stand for it? Would it be an homage to the team’s glory days? Or a tasteless papering-over of the team’s history?

Time will tell what the Nets’ marketing machine will come up with. But due to the success of the throwbacks this year, and the Basquiat City Editions, you’ve got to expect them to swing for the fences.