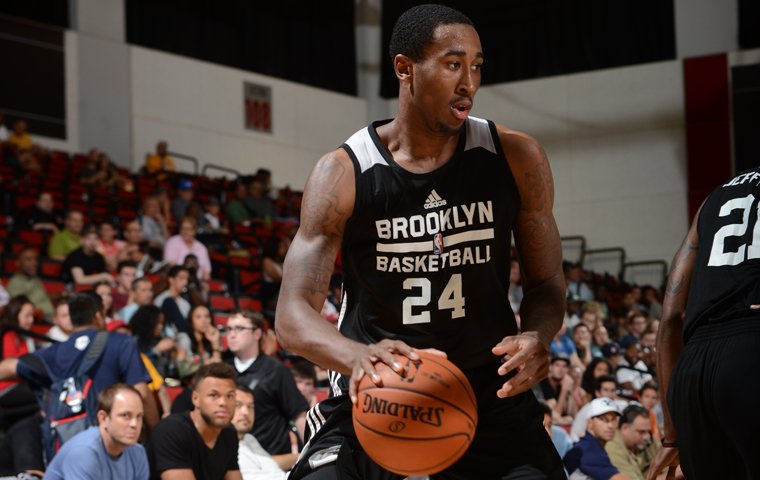 With Brooklyn Nets head coach Kenny Atkinson making the unconventional decision to coach this year’s Las Vegas Summer League Nets roster himself, spectators of the Nets vs Hawks game got treated to a noticeable amount of effort from the Brooklyn-representing squad to impress Atkinson in the 75-72 Nets victory. Even Archie Goodwin, arguably the Nets’ best performer of the night, admitted in a postgame interview, “[Atkinson and Nets general manager Sean Marks] told me to just be a dog out there defensively.”

With enough effort to be satisfactory for the regular season, the Nets stifled the Hawks’ offense with swarming arms to the point of only allowing 48 points in the first 30 minutes of the game. If there are negatives to take away from the Nets’ performance, however, they would include the Nets then pivoting into leisure mode for the final quarter once they began the quarter with a 16-point lead.

This shift in physical exertion allowed the Hawks and, more specifically, last year’s first-round pick DeAndre’ Bembry to whittle the lead down to one point with only 40 seconds left in the game. Opportune instincts from regular season rotation hopeful Spencer Dinwiddie, snagging a poor pass from Bembry for his fifth steal of the night and following the turnover with a pass for a casual Caris LeVert dunk in the fast break, would preserve the slim lead. Then, a return of the effort of the previous three quarters stymied Bembry from getting his feet under him for a potential game-tying three-pointer, and Bembry bricked against the glass badly to seal the game’s fate.

LeVert, Goodwin, Dinwiddie, Isaiah Whitehead and Rondae Hollis-Jefferson displayed active wing defense for the majority of the game, which lends encouragement for an improvement on Brooklyn’s 23rd ranked defense from last season. The wing defense occasionally seemed too eager to abandon the arc to crash into the paint to bother ball-handlers, even doing so on the strong side of drives. However, the young defenders may have had the excuse of the Hawks not deploying many threatening shooters, as only G-League All-Star Josh Magette executed to salvage a 2-of-13 line from beyond the arc for the Hawks. Whether the perimeter abandonment will lead to poor habits and errors against offenses with more potent marksmen remains to be seen.

Offensively, Atkinson allowed his wings from the main roster free reigns to initiate the offense. The results of the wings taking turns as primary ball-handler can be deemed a mixed bag, as LeVert, Goodwin, Whitehead, and RHJ all aggressively attacked the Hawks’ interior, but the 5-of-24 three-point shooting performance by the Nets denied them much space to freely attack the rim. Goodwin dealt with the ball-handling duties the best for the game, as his explosiveness often afforded him a second or two of a head start over the reactions of the Hawks’ help defense. Goodwin scored 14 points on 6-of-10 shooting from the field in his 22 minutes off the bench and, perhaps most encouragingly, had enough patience to usually reset the offense when he couldn’t get the open driving lanes he wanted and not force a turnover.

LeVert, Whitehead and RHJ had less success than Goodwin in creating offense as they, especially Whitehead, spent too many trips bowling into difficult contested layups in the paint and inadequate drive-and-kick plays. The lackluster playmaking combined with the 0-of-7 three-point shooting hinted at the potential importance of a healthy Jeremy Lin and newly-acquired D’Angelo Russell to have a smooth Atkinson-curated offense.

As for the sleeper player of the game for the Nets, Nathan Boothe offered needed utility as a stretch 5 to offer any modicum of spacing for Brooklyn. Knocking 3-of-8 from downtown, including a clutch three with a minute left in the game to extend the Nets’ lead to five, Boothe also flashed some savviness as a passer and a defensive ball-hunter. Boothe’s athleticism presented clear limitations in his capabilities, as the 6-foot-9 Toledo graduate was a relative non-presence on the glass and couldn’t handle the athleticism of John Collins and Alpha Kaba defensively without fouling. Still, Coach Atkinson famously loves his stretch big men, especially if they can keep up with his game-plan’s requisite ball-movement. Boothe may get closer to a training camp invite with similar performances like Friday night’s.