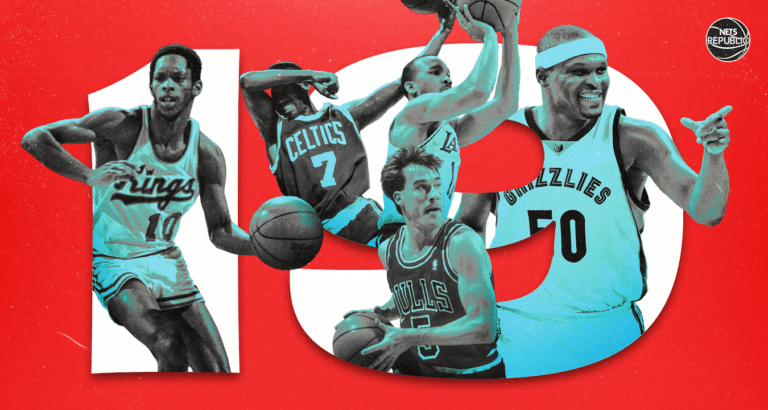 The Brooklyn Nets first appear on the clock at No. 19. Hall-of-Famers and NBA Finals heroes have previously emerged from such a spot.

As the 2020 NBA Draft approaches on Wednesday (7 p.m. ET, ESPN), the Brooklyn Nets and their basketball brethren are nonetheless engaged in a flurry of deals, barters that will inevitably include the swapping of selections. The Nets, in fact, dealt their first-rounder away from last season two weeks after day, sending the 17th choice of Nickeil Alexander-Walker to Atlanta in a trade that netted them Taurean Prince.

How’s their outlook at No. 19? NetsRepublic looks back at five great selections made in the slot over NBA Draft history…

Best known for his tenure with the franchise that eventually became the Sacramento Kings, “Tiny” Archibald began his basketball endeavors in the South Bronx at DeWitt Clinton High School. After working his way into a college tenure at Utep, Archibald was chosen in the second round of the 1970 draft by the Royals. The 1972-73 campaign would be a magnum opus for not only Archibald, but point guards in general. He became the first player in league history to lead the league in both scoring and assist averages and his point tally of 34.0 still stands as a record for a point (to go along with 11.4 assists).

Archibald would later spend 34 games with the New York Nets during the 1976-77 season through a trade. He was dealt to the Buffalo Braves shortly after but never played a game for them after tearing his Achillies tendon. Five years with the Boston Celtics awaited shortly after, as did an NBA title in 1981. Archibald notably earned a double-double (13 points, 12 rebounds) in the clincher over the Houston Rockets. He was inducted in the Naismith Memorial Hall of Fame a decade after his championship run.

Paxson is likely more renowned for his ongoing career in the Chicago Bulls’ front office, but his playing career recently enjoyed a moment in the spotlight thanks to the airing of the acclaimed ESPN documentary The Last Dance. The Notre Dame alum was originally a first-round pick of the Spurs, but joined up with the Bulls two years later to join Michael Jordan himself in the backcourt. Paxson not only proved to be reliable…appearing in 82 games on three occasions…but forever etched a name for himself in basketball history when he capped off the Bulls’ first three-peat of the 1990s through a go-ahead three-pointer in the dying stages of Game 6 of the 1993 NBA Finals in Phoenix.

While Paxson’s time in the Bulls’ front has proved polarizing, he left an impact on Jordan. Shortly before his return to the court in Washington, Jordan interviewed Paxson for the Wizards’ head coaching spot, a job Paxson would later decline.

Brown opened eyes as a point guard for his hometown school of Jacksonville University and was chosen by the Celtics in the first round in 1990. His debut NBA season was one for the books, appearing in all 82 games and on the All-Rookie First Team alongside the Nets’ Derrick Coleman. That season also saw Brown earn eternal All-Star weekend glory through his performance in the 1991 Slam Dunk Contest, sending the crowd gathered in Charlotte into a frenzy with a no-look dunk to cap things off.

Retirement has been anything but quiet for Brown. He was one of several NBA veterans to partake in the third season of the ESPN reality series Dream Job, beating out Matt Bullard for the role of a studio analyst. Prior to that endeavor, Brown spent a single year at the respective WNBA head coaching helms of Orlando (2002) and San Antonio (2004). Brown currently serves as the general manager for the Agua Caliente Clippers of the NBA G League.

Randolph declared for the draft after a single season under Tom Izzo at Michigan State. Randolph struggled to find a role with the Trail Blazers in his first two seasons but the steps forward he took in his third season (20.1 PPG, 10.5 RPG) were enough to earn the Most Improved Player Award. It was the start of a strong NBA career, a 17-year journey that also took him to New York, Los Angeles, Memphis, and Sacramento. Randolph made the biggest name for himself in Memphis, helping the Grizzlies reach the Western Conference Finals for the first time in 2013. Notably, Randolph put up a 28-point, 14-rebound double-double in the clinching finale to pull off a five-game upset over Oklahoma City to advance.

Bradley has established a reputation as one of the more athletic players and most tenacious defenders in the modern NBA. Damian Lillard has referred to him as the tough perimeter defender in the NBA, a trait Bradley has used en route to two appearances on the league’s All-Defensive teams (earning First Team honors in 2016). Having since joined the Los Angeles Lakers, Bradley was one of the most notable names to opt-out of partaking in the NBA’s season resumption in Orlando over the summer, but he will nonetheless be awarded a championship ring when the 2020-21 season commences.