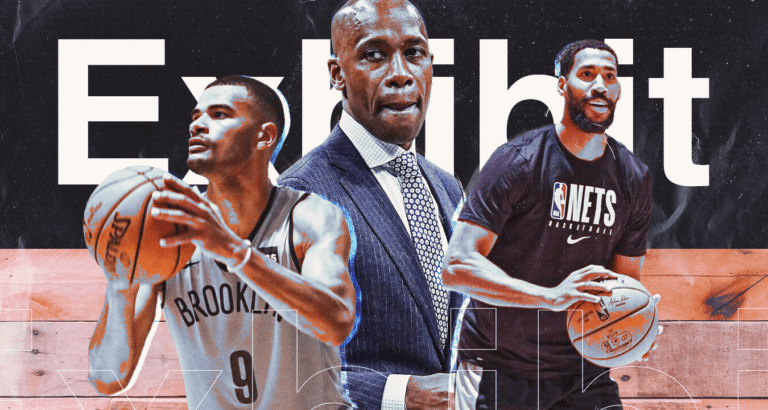 Brooklyn Nets Film Breakdown: What To Make of Jacque Vaughn

On the morning of Saturday, March 7th, the Brooklyn Nets and Sean Marks announced the end of Kenny Atkinson’s 4 year tenure as Nets head coach. The departure came off the heels off a 139-120 victory against the Spurs, a surprising move to say the least for an organization already in turmoil.

Nevertheless, the Nets persist. Former assistant Jacque Vaughn assumed coaching duties, and the Nets ended the season 2-0 before the 2019-20 NBA season was put on hiatus due to the novel coronavirus. During the hiatus, rumors swirled around the Nets’ coaching search, with candidates including Ty Lue, Mark Jackson, Jason Kidd and even Gregg Popovich.

While it is still unclear who will be working the sidelines at Barclays Center next season, Jacque Vaughn is making a strong case to shred the “interim” part of his job description. Seemingly out of the blue, Adrian Wojnarowski reported that Vaughn is considered the favorite for the Nets gig next season, citing a bond formed with stars Kevin Durant and Kyrie Irving built at the beginning of the season.

If Vaughn is indeed here to stay in Brooklyn, it’s time to take a look at what he’s done with Brooklyn’s scheme, both offensively and defensively in my first Nets Film Breakdown.

Under Kenny Atkinson, the Nets ran drop coverage against pick and rolls. Drop entails the player being screened – usually a guard or perimeter player – fighting over the screen while the player who’s man is the screener – usually a center – is dropping back to contain the rolling big as well as the ball handler. No defensive coverage is perfect, and winning basketball is a game of manipulation, forcing the other team into attempting the shots you’d like.

Drop coverages gifts opposing ball-handlers mid-range jumpshots, which won’t faze the defense. Sure, they’re open, but the shot won’t fall every time. When considering the difficulty of mid-range attempts and them only worth 2 points on the scoreboard, a mid-range jumper is the least efficient shot in modern basketball, and that’s what drop coverage aims to exploit.

In a way, it’s simple math. The two best shots are three pointers and attempts inside the paint, and that’s what drop coverage aims to take away. The perimeter player run the ball handler away off the arc, and the big drops to protect the basket.

Notice below how once Allen recognizes the lumbering Vucevic is stepping up to set a screen, he begins baby-stepping back in anticipation. Dinwiddie stays on the right hip of Fournier – a 40% shooter from deep – to coax him into a mid-range shot. Allen extends his left arm in an effort to eliminate a potential pass to a rolling Vucevic. Fournier takes the bait, and settles for a leaning elbow floater – in which he shoots about 40%. For those of you keeping track at home, that shot equates to being worth 0.8 points (since the shot attempt is worth 2 points) per possession, a full point below the Magic’s team average of 1.08 PPP. Mathematically, an excellent defensive possession.

However, Jacque Vaughn – while being Atkinson’s top assistant for three years – might not hold the exact same defensive principles. Vaughn seems to favor switching slightly more than Atkinson did, which was once of my only serious criticism’s with the former coach. Against elite mid-range shooting teams – such as the OKC Thunder with Chris Paul and the Indiana Pacers with Malcolm Brogdon – sticking to rigid scheme of drop coverage scheme becomes a poison pill in late-game situations.

Switching has been popularized in recent years by two contending teams out west – the Golden State Warriors and the Houston Rockets. Switching is exactly what it sounds like, a switch. The screener’s defender will step up to guard the ball-handler one-on-one, and the ball-handler’s man will switch onto the screener.

The clip below of the exact same action – a Fournier/Vucevic pick-and-roll is switched, and notice the difference. Once Fournier turns the corner and starts heading towards the basket, Allen is at the Apex ready to meet him and forces a pass out of a tough step-back. However, Vucevic is able to use his height to rise up above LeVert and drain the fadeaway.

For the same reasons outlined earlier, Kenny Atkinson was not a fan of mid-range shot attempts from the Nets. Only one player consistently had the green light to let it fly between the arc and painted area this year – mid range maestro Kyrie Irving. No player made this mid-range bad more apparent than the sharpshooting Joe Harris.

Harris had a breakout year in the 2018-19 campaign, netting in 47% of his longballs, a league high. Make no mistake, he’s not one-dimensional player. The Virginia product is a sneaky good finisher, a crafty pro around the rim able to swerve around the trees and finish with ease. He’s been used primarily in action where he can curl around flare screens and catch the ball in rhythm.

Under Atkinson, he either opted for a three pointer or a drive to the rack. Being the elite marksman he is, the threes often dropped right through the net, such as in the clip below.

Harris has only been able to put his head down and head towards the basket on these actions, and he draws contact below.

However, these two choices can get predictable. Once teams know what’s coming, it becomes easy to adjust to Harris’ drives. In fact, he’ll get swatted at the rim when facing taller, smarter defenders.

In Brooklyn’s few games with vaughn as coach, Harris has opted to take more pull-up midrange off of the curl, keeping the defense honest. A guessing defender is a weak one, and Harris is able to use Vucevic’s uncertainty to rise up and drain the jumpshot.

I do not want Harris to start relying on this shot as a go-to since the rim attempts are much more efficient. Although for Harris to keep his shots near the basket of high-percentage, these shots must become part of his arsenal.

Vaughn has also experimented with new actions to get Harris open, and he hasn’t been forcing the issue to the rim on these plays either.

This is just the first we’ve seen of Jacque Vaughn, as I’m sure he has plenty of tricks up his sleeve to unveil during the Orlando restart as he set his eyes upon the head coaching role for next season. I’m excited to see what else the Nets try as the season slowly winds down.