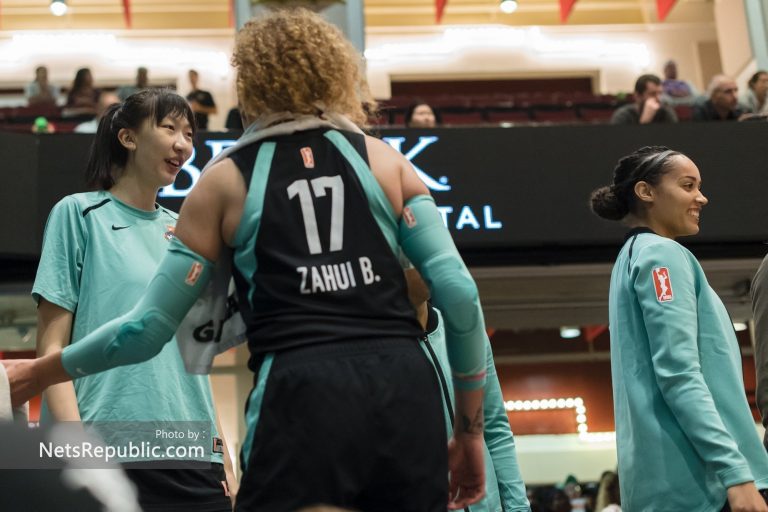 In what can only be described as a surprise upset, the New York Liberty notched their first win of the season over the defending champion Washington Mystics. New York improves to 1-5; Washington falls to 3-3. The 74-66 final score had no late-game stat padding: New York held firm control for most of the game, not allowing Washington to narrow the scoreboard gap to closer than five points at any point in the second half. Though we’ll get into more detail shortly, it was the vets that carried the team in this one, accounting for 48 of the team’s points, while New York’s half-dozen rookies combined for just 26. When the final buzzer sounded, Walt Hopkins had earned his first win as a head coach, and the Liberty erased the goose egg in the standings.

Coming into the game, the Mystics were the W’s second-highest scoring team, averaging 89.5 points per game and a league-leading 9.4 made threes per game. A stingy Liberty defense held them way below those averages. On Friday night, New York surrendered just 66 points and four three-point makes on 16 attempts.

After breaking the century mark to drop 101 on the Indiana Fever opening night, Washington has seen its scoring output dip with each consecutive game. The 66 points were the Mystics’ lowest the team had scored since a June 3, 2018 loss to the Connecticut Sun, in which they only put up 64.

The Liberty have struggled defending the perimeter, often allowing open looks as the players navigate screens. Friday night flipped the script. “Part of our defensive scheme was to not get into rotations,” Layshia Clarendon said after the game. “When they make 10 or more threes a game, they typically win.” While Washington’s misses from deep mostly came on good opportunities, New York did a good job running Mystic players off the three-point line to limit the amount of threes they took.

The Vets Step Up

Although all ten rostered players saw action, this was by far the most time we’ve seen from the starters. Leaonna Odom, in her first career start, spent the least amount of time on the floor with the first unit, and still played over 27 minutes. Jocelyn Willoughby led the bench in terms of court minutes, though she logged just over 14 minutes. Odom and Willoughby scored nine points apiece to pace the rookies.

However, this game, as mentioned earlier, was all about the play of the vets.

This was easily Amanda Zahui B’s best game of the young season. In the first half, she knocked down four threes. Throughout the contest — and especially late — she was a menace on the boards, pulling down a career best 14 rebounds to pair with her 14 points. Her energy in the fourth quarter lifted up each of her teammates, willing them to the victory. Zahui ended possessions, made pocket passes, showed strong emotion. She was an absolute force.

Although she still struggled somewhat with her shot, this is the best Kia Nurse looked all season. When she’s on, she’s attacking defenders and getting to the line. Despite being just 4/11 from the floor, Nurse scored a team-high 17 points because she converted seven of her eight attempts from the free throw stripe.

In the fourth quarter, with the game still in reach for the Mystics, much of the Liberty offense was generated by Nurse, where she accounted for 10 of the team’s 17 points. Nurse made both her shots from the field and five of six from the line to help stave off the Mystics. One of her four-quarter makes was a pretty three. After a switch and late closeout from Ariel Atkins, Nurse loses her with a ball fake and sidesteps to knock down the open look.

After the game, Nurse told reporters that her shots have all been feeling good, so she hasn’t tweaked her game much. She’s going to keep shooting. The shots will start falling.

Layshia Clarendon had another terrific all-around game, scoring 13 points on just seven shots, largely due to the 4/5 threes they converted. Filling out the box score, Clarendon secured four boards, handed out six assists, swiped two steals, and notched a team-best +13 while on the floor. While their seven turnovers can still be cleaned up, this large role will take some time for Clarendon to get used to. Coach Hopkins said before the game that this is the first time Clarendon has “had the keys to the car.”

Though it took the Liberty six-and-a-half minutes to make a bucket inside the arc, this perfectly lobbed dime from Clarendon to Nurse finally added a +2 to the scoreboard.

For a team that has struggled to finish, the Liberty showed great poise on Friday night. The team ended each of the first three quarters on a positive note, scoring with five seconds or fewer each time. These crucial buckets helped extend leads to provide some more cushion before stoppages. Additionally, New York scored first in three of the four quarters, bookending the breaks with more offense and maintaining momentum.

Pregame, Coach Hopkins talked about what the team needed to do to avoid the nightmare quarter that had plagued New York in each contest thus far.

“Consistency is always a problem with young teams,” Hopkins said. “What are the things that make us fall behind or have a 27-6 quarter? It’s pretty clear that turnovers and points off turnovers, offensive rebounds and second chance points have been killing us. Then there’s the intangible energy and focus. I think resilience to things not going our way, and I think that’s a learned skill, even for our young vets.”

There was no bad quarter on Friday night; the only period Washington outscored New York was the third, and that was by a narrow 19-17 margin. While turnovers were still a problem — the Liberty totaled 19, which is about on par with their league-worst average — these miscues did not lead to many points for the Mystics. The teams scored nine points apiece off those errors, so the turnover battle was largely a wash.

The New York Liberty truly separated in cleaning the glass. Washington notched just one — one! — offensive rebound on the night, struggling with New York’s physicality and boxing out. The final rebounding tally was 38-26 in favor of the Liberty, including a stretch of four consecutive possessions at the start of the fourth that ended with Zahui B securing the board.