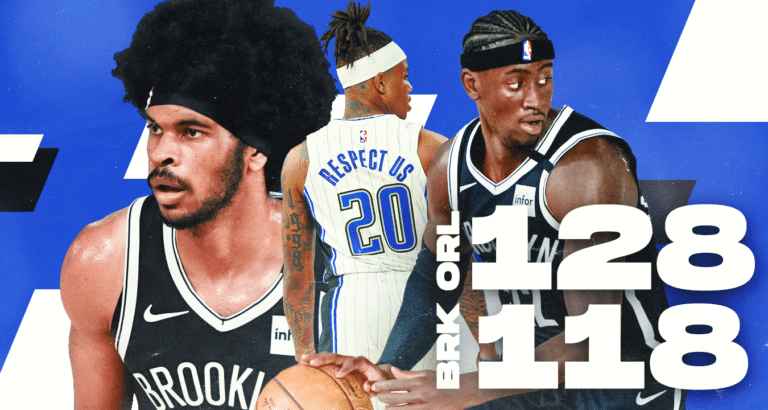 The glaring question facing the Brooklyn Nets was if they had enough offensive firepower to make their experience at the NBA Restart competitive. Through one quarter against the Magic, the answer appeared to be ‘yes’. Orlando had no answer for the two-man game of Caris LeVert and Jarrett Allen. Magic coach Steve Clifford’s early insistence to send his defense over Allen’s screens allowed the Brooklyn duo to play 2-on-1, dicing through the lane for a variety of floaters, lay-ups, and dunks.

When Pelicans coach Alvin Gentry termed the NBA Restart as the world’s “biggest and best AAU tournament”, he was likely envisioning the type of basketball played in the first quarter. Brooklyn and Orlando, running the ball up and down the court and ready to shoot the first available shot, seemed to determined to avoid running likely-rusty half court sets against set defenses.

Brooklyn, doing more than just competing with Orlando, was shooting nearly 70% from the floor after the first 12 minutes. Interim head coach Jacque Vaughn‘s motion offense wasn’t revolutionary, but simply driving, kicking, and filling spots out on the perimeter was more than enough to generate a plethora of open looks for the Nets.

The Nets second unit shuffled between ineffective and inept on the offensive end all year. And that was before they traveled to Orlando missing a handful of regular contributors. After putting up 39 in the first quarter, Brooklyn only mustered up 43 points across the second and third periods, as the second unit couldn’t keep up the hot shooting the starters provided, and the starting unit never re-discovered

The LeVert-Allen combo that proved fruitful in the early going was completely neutralized once Steve Clifford adjusted the game plan upon their re-entry. The Magic started trapping LeVert once he came off ball screens, and over-rotated their defense to confront Jarrett Allen on the short roll. Simply, Orlando dared the non-LeVert Nets to make them pay for doubling Caris, and nobody could. Not Chris Chiozza, whose lack of shooting prowess at the point guard position further shrunk the floor for Brooklyn. Nor could the myriad of rotation wings and forwards Jacque Vaughn tried to find sparks with, as the Nets finished a paltry 13-42 from deep. Overall, the auspicious start on offense became quickly overshadowed by 30 minutes of stagnation; a quick flurry of buckets during garbage time from the third unit was the only factor separating the Nets from a 30-point embarrassment.

How did the Nets turn a first quarter advantage of three points into a thirty point deficit in just 20 minutes? It wasn’t just the offense. From the jump, the Nets had trouble defending even the simplest of off-ball action. Every Orlando cut to the basket resulted in either a foul, a lay-up, or a kick out to a wide open shooter. Brooklyn’s offense certainly suffered from the extended lay-off and the decimation of their roster, but it was their defense that truly suffered.

It wasn’t from a lack of effort either, as the Nets committed to Jacque Vaughn’s attacking defense, hell-bent on ball pressure and switching in nearly every screen situation. But their lack of experience playing together showed itself in the form of an inexcusable absence of communication and weak side rotations. For a while, it looked Orlando might put up 150 points in regulation and shoot 65% from the floor, before that aforementioned stretch of garbage time settled those numbers at a mere 128 on 53% shooting.

This could be a long two weeks for Nets fans.