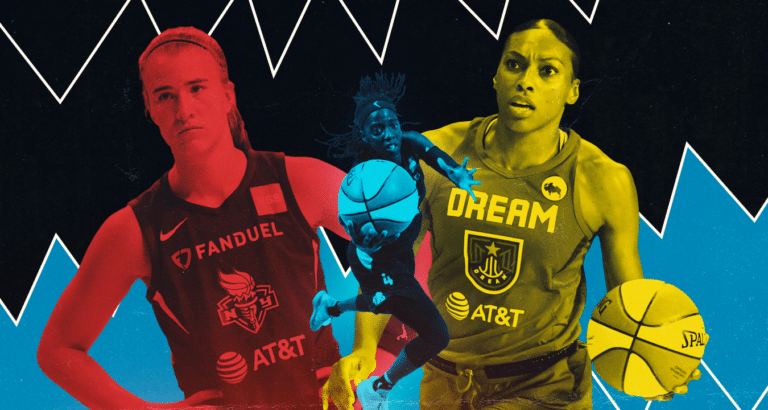 The New York Liberty played their strongest game of the young season, but fell 84-78 to the Atlanta Dream. New York falls to 0-3, while Atlanta climbs to 2-1. Jaz Jones led the team in scoring with 20 points, while Betnijah Laney paced the Dream with a career-high 30 on 11/18 shooting.

Coming into the game, all eyes were on the matchup between the two lottery picks, #1 Sabrina Ionescu and #4 Chennedy Carter. However, nearly halfway through the second quarter, Ionescu badly rolled her ankle near midcourt. To that point, she had 10 points on 4/5 shooting, and had helped to lead the Liberty back into the game after a flat start (more on that later). The entire fanbase holds its breath as we await further news, but Ionescu appears to have avoided the worst case scenario.

Before she left, Ionescu had several highlights. The best of them came just seconds before her injury. After Ionescu converted a layup, Atlanta tried to push the pace, launching a pass to Blake Dietrick. Ionescu, sprinting full speed, had just enough time to get her head around and leap to knock the pass off course, doing her best impression of — Jamal Adams? Landon Collins? Who does New York football even have at safety anymore? Ionescu angled the ball to Layshia Clarendon, then her momentum carried her into a backwards somersault. After the tip drill, Clarendon dribbled past the scattered defense to convert the lay-in.

For her part, Carter had a decent game. She put up 17 points and three assists before fouling out. She did so on just 6/15 shooting, and had been held in check for most of the game. Carter did, however, take over the game late, going 3/4 and scoring eight points in the final frame, and was the quickest player on the court, looking unstoppable during that stretch. Still, for a New York Liberty team that struggled immensely in stopping anybody, this game showed major improvement, though there were questionable lapses early.

A Nightmare Start Against the Dream

By the time the Liberty finally put the ball through the basket, nearly half the first quarter had elapsed and the Dream had scored a dozen. Everything looked rough: missed shots, a run of five straight possessions that ended in turnovers, and lots of lapses in effort. In a game in which they would surrender 17 offensive rebounds, the Liberty forfeited seven second-chance opportunities in the first quarter alone.

Here, three players turn to rebound the ball, but not one puts a body on Laney, who crashes from the weak side for the easy putback and the foul.

On the night, New York got very little from their starting frontcourt vets. In a combined 39 minutes, Amanda Zahui B and Kiah Stokes combined to miss all 10 of their looks from the floor, contributing just two points, a dozen boards, and four blocks. A bright spot on defense, though: Zahui B and Stokes were two of five Liberty players (along with Jones, Kylee Shook, and Willoughby) to notch multiple blocks, and the 11 total blocks tied a team record:

Offensively, other players had to pick up the slack. Several players keyed the comeback and kept the game close: Layshia Clarendon, Jazmine Jones, and Jocelyn Willoughby.

Through three games, Layshia Clarendon has done everything the Liberty could have wanted from their lone free agency signing. Only Ionescu has scored more than them through three games, and Clarendon’s current 15.7 points per game outpaces their career high of 10.7 back in 2017 with Atlanta. Clarendon has been a leader both on and off the court, so it made sense to see them step up as a leader and competitor following Ionescu’s injury.

Off a rebound and Zahui B outlet pass, it took Clarendon just two dribbles and a ball fake mid-euro (and perhaps an extra step) to slice through the defense and put New York up four during the final stretch of the second quarter.

On the night, it took Clarendon 19 shots to score 16 points. Their five assist/six turnover ratio is not what you want from the point guard position, but their steadying impact on the court cannot be overstated, especially as they spent much of the night flanked by all-rookie lineups.

After Coach Hopkins eased Jaz Jones into her first WNBA action with a dozen minutes, he cut her loose on Friday, needing a backcourt spark without Nurse and, eventually, Ionescu. Jones responded, hitting 6/10 from the field and 6/7 from the line for a team-high 20 points. On the other end of the court, she harassed the Dream at every opportunity, notching two steals and two blocks. Here, she fought past a rub by Elizabeth Williams to recover and block a Carter jumper on the baseline.

After the Liberty fell down early, the second unit came in to help fuel a comeback. “We have a mindset, all the rookies especially — just run down the court, be relentless,” Jones said of the second unit’s resiliency. “We’re very talented.” Jones’ energy is palpable every moment she’s on the court; this game, she converted it into buckets. After scoring just 22 and 20 points in the first two contests, the second unit erupted for 36 points on Friday night.

Jocelyn Willoughby made her first start on Friday night, in place of the injured Kia Nurse. After missing some easy looks at the basket early, Willoughby settled in and had a solid game. Outside of Ionescu, she’s been New York’s most consistent shooter outside the paint thus far. On the night, she hit 5/10 shots (and 2/3 from deep) on her way to 14 points.

Willoughby has missed some easy looks inside, but it’s an extremely small sample size thus far. So much of her game in college was predicated on her ability to absorb contact and finish at the rim. Look for her to improve on these numbers.

No Time to Relax

As will be the case all season long, there’s a quick turnaround before the next game. The Liberty take on the Phoenix Mercury (1-2) on Sunday afternoon at 1 PM EST on ESPN. The Mercury are third in scoring at 92.7 points per game. In order to hang with them, the Liberty will need to knock down their long range looks. Through three contests, nobody is taking more threes than New York (27.3 per game), yet the team is last in three-point percentage (26.8%). With the team potentially down both Ionescu and Nurse, it’ll take a full team effort to hang with Phoenix’s big three.