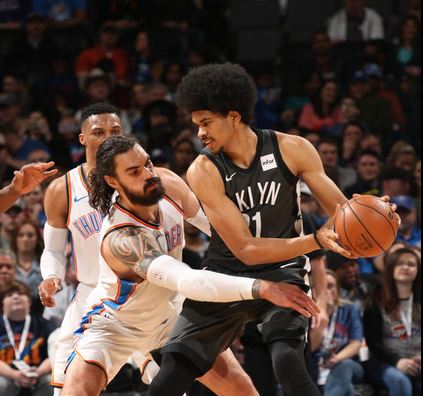 The Brooklyn Nets could not replicate the Mexico City victory over the Thunder in Oklahoma City. Another clutch Spencer Dinwiddie driving layup sent the Nets up 108-107 with seven seconds left. However, Russell Westbrook finished through the chest of Jarrett Allen on a game-winning layup with three seconds left.

The 109-108 defeat finishes the season series between Brooklyn and OKC at one victory a piece. The Nets also are now 4-4 in the eight games decided by a margin of five points or less since December 31st. You win some, you lose some.

With this 5 for 5 incineration from three against OKC’s top five defense, Joe Harris now has shot 26 of 49 beyond the arc in January. Harris has become the most vital Net on offense this month because of the lack of efficient shooting elsewhere.

Harris succeeded tonight in scoring 19 points on 10 shots as always: motoring like a pinball to get open off-ball. The four year veteran unsurprisingly leads all Brooklyn rotation players in average speed on offense (4.94 mph via NBA.com).

There are understandable premiums in the NBA on creating shots off the dribble or in the low post. However, the ability to move oneself open at an elite level shouldn’t be handwaved either.

The Nets have been blessed with a breakout Spencer Dinwiddie season, continued development from Caris LeVert, and hopefully the first of more flashes of elite prospect brilliance from D’Angelo Russell. Yet, no one of those burgeoning talents are yet able to consistently create good shots every game. Players like Harris are needed to help these types of ballhandlers along.

It is quite difficult to win games when the opposing offense only turns the ball over four times the entire game. That’s naturally what OKC accomplished against the Brooklyn Nets. Thunder star Russell Westbrook averages over four turnovers a game by himself this season.

The Nets’ inability to force errors remains a constant this season with Brooklyn. The Nets don last place in opposing turnover rate with a 11.4% mark. Last season, the Nets could not achieve much better in a 28th place slot and a 11.6% mark. The Nets simply do not generate any pressure in passing lanes or on-ball, despite often having a length advantage in the backcourt.

Obviously, Kenny Atkinson made a choice on prioritizing discipline in denying and contesting shots around the arc over any gambling for deflections. The lack of turnovers is not due to a lack of defensive effort but rather a detouring of effort.

It is nearly impossible for a defense to thrive in the four major factors of sound shot contesting, strong defensive rebounding, lack of fouling, and causing turnovers. Atkinson has chosen to focus on the first two factors. The strategy has led Brooklyn to a pleasantly surprising 15th ranked defense.

The Nets close out hard on shooters (often too hard) and crash the defensive glass aggressively from the wings. That’s their modus operandi and they are sticking to it.

Yet, when an opposing offense can succeed in hitting their threes or dominating the offensive glass anyway against the Nets, Plan B is hard to come by. Brooklyn cannot survive too many nights where the opposing center nabs nine offensive rebounds himself like Stephen Adams did.