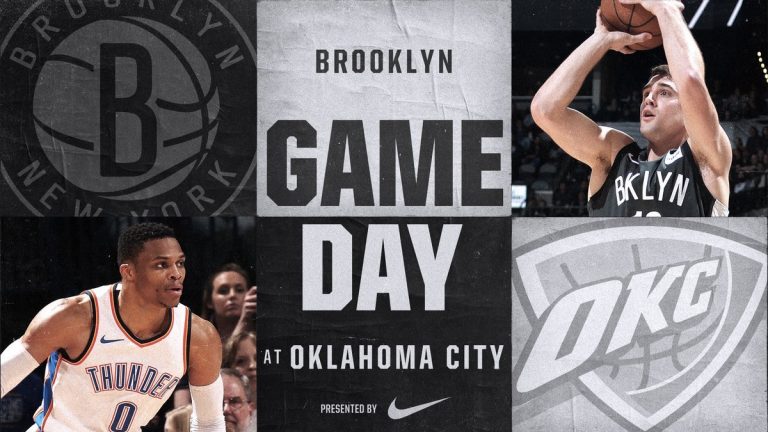 How To Net The Win: Brooklyn Nets at Oklahoma City Thunder 1-22-18

January has been quite the month for the Brooklyn Nets. In it, they’ve suffered agonizing defeats (some even embarrassing) and thrilling victories, and the team has almost changed their identity entirely. The Oklahoma City Thunder have been quite the opposite. Outside of a short three-game skid at the beginning of the month, they’ve been handling their opponents with ease.

Both teams will be carrying momentum into their meeting on Tuesday. Brooklyn is coming off of a victory on Sunday over the Detroit Pistons that featured a game-winner by Spencer Dinwiddie with just 0.9 seconds left. The Thunder, on Saturday, bludgeoned the Cleveland Cavaliers and exited with the 148-124 victory, stretching their winning streak to four games.

The Nets have already beaten Oklahoma City once this year, but that came early in the season when the team was still trying to figure itself out. Since then, Russell Westbrook has returned to MVP form (26.9 points, 10.5 assists, 10.1 rebounds and 47.2 percent shooting in 22 games). Moreover, the rest of team has come together. After their rocky start, the Thunder are emerging as one of the Western Conference’s most fascinating teams and have consistently played at an elite level on both ends of the floor.

While things haven’t panned out the same for Brooklyn, improvements are happening. Dinwiddie has become a respectable and capable starter while the team stresses more of a commitment to the defensive end of the floor, which is vital to competing with this Thunder team.

Be Strategic With Perimeter Pressure

Brooklyn has done a not-so-great job of protecting the perimeter over their last five games. Opponents are making 40.4 percent of their triples, which is the fifth-worst mark in the league. However, the Nets prevent a lot of makes. And that’s helped keep their defense from going under. Over that same stretch, teams are averaging just 21.8 shots from downtown. It’s evident that the coaching staff is emphasizing running guys off of the three-point line, and that’s noticeable because of the copious amount of free throws (26.6).

Oklahoma City runs a balanced offense, but that doesn’t mean their exceptional at everything. The team has few marksmen, but everyone else has been underwhelming during the Thunder’s dominance. Carmelo Anthony is the only perimeter threat who’s been a high-volume shooter during their winning streak — he’s burying 2.8 triples a night on 39.3 percent. Patrick Patterson (53.8 percent) and Alex Abrines (44.4) are the only guys ahead of him, but they see limited minutes and have 13 and nine total attempts, respectively.

The defense can live with those guys being hot. However, none of the guards or forwards should prioritize them over someone like Paul George. Patterson and Abrines likely aren’t going to see minutes that are influential, but George will. He boasts a modest 36.7 percent clip from outside in the Thunder’s last four wins, but he could quickly become hot if he makes one or two open shots.

D’Angelo Russell is finally back from injury! Well, he has been. But he’s not back yet. Kenny Atkinson has welcomed him back with a stranglehold on his minutes. In the games against Miami and Detroit, he’s totaled just 28 minutes of action and hasn’t made an impact. Through those two outings, Russell’s 1-of-10 from the field with four points and three assists. It’s not exactly ideal.

Russell, however, hasn’t been shy about getting his shot, and that’s a great sign. Against the Thunder, he’s going to face an elite defense that throws either Andre Roberson or Westbrook at him. Hopefully, he’ll remain aggressive and keep trying his luck from either the mid-range or around the basket. Thus far, six of his 10 attempts have been threes. Only one has fallen. Additionally, Russell’s gotten just two free throws. If he wants to get his rhythm back sooner than later, getting those uncontested looks are vital to building confidence, which will help him return to the player he once was.