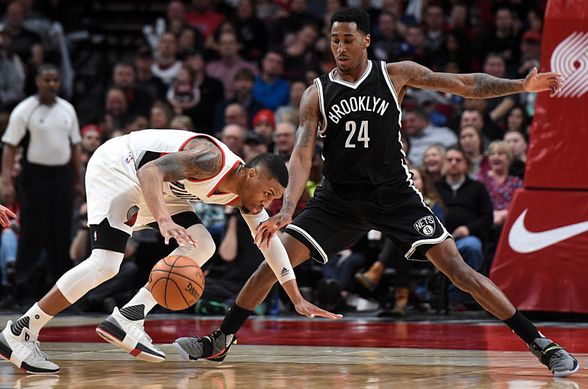 Site Manager Nicholas LeTourneau will be breaking down the Brooklyn Nets schedule in a three-part series. This one focuses on back-to-backs and other key games. Next up is a look at revenge games and will end with a prediction of how the season will go. Stay tuned!

It’s the middle of August. The dust has settled on all of the major free agency moves and trades; America is in a Twilight Zone episode where someone totally unqualified took over as president and in under a year has both pushed us to the brink of world war and allowed white supremacists to storm your streets; and outside of needing another forward, the Nets’ roster is pretty much squared away.

There hasn’t been a lot of basketball to discuss lately, but thankfully, the NBA schedule was released on Monday night so basketball fans have something to get lost in. Adam Silver has said the NBA made a conscious effort to reduce back to backs in order to prevent teams from resting star players during the regular season, so let’s take a look at some of back to backs and key games on the Brooklyn Nets schedule.

There is a total of 13 back-to-backs on the Brooklyn Nets’ schedule, but not all are created equal. Some will be more important or more taxing than others. Let’s take a look at some of the key ones on the season:

This series is early in the season, so fatigue shouldn’t be too much of a factor. However, traveling from Orlando to Brooklyn to face LeBron James, Kevin Love and maybe Kyrie Irving. Brooklyn will undoubtedly come out of the gates swinging, looking to catch teams off guard that are still trying to mesh or are already overlooking the Nets on their schedule.

If the playoffs are something the Nets truly want to accomplish, then they will need to at least get good at splitting these back-to-backs. Winning in Orlando is very doable, but beating Cleveland is a tough outing for any team.

Expect Brooklyn to split this one.

I decided to roll these into one section because the individual back-to-backs isn’t that impressive or daunting. But, these will be coming all on the same road trip, which is very significant.  Jeremy Lin isn’t injury-prone, but that doesn’t mean I won’t wince every single time he hits the deck, especially on long road trips and back-to-backs like this.

The bottom of the Western Conference can usually hang with the average team in the Eastern Conference, but some of these games should be winnable. The Suns are still in the middle of a rebuild and are a giant question mark of youth, so Brooklyn’s balance of veterans and youngsters, paired with Kenny Atkinson’s incredible coaching, should handle them. The rest of the teams will be true tests.

The Denver Nuggets are a great balance of veterans, youth, great coaching and one borderline unicorn in Nikola Jokic. Playing them at home after facing the Suns will be a serious challenge. Jamal Murray has all the tools to be a Nets killer given his 3-point shot and quick first step, Gary Harris might be the most under-appreciated player in the league and the roster is pretty balanced. The Nets might have a rough go in this one.

I’ll go into greater detail about the Portland matchup in my following post, but even after the three-day break, it will be a tough contest for the Nets. Matching up against Damian Lillard, C.J. McC0llum, and Jusuf Nurkic isn’t an easy task for any team, but they still have a lot of issues to solve on defense. If the Nets can get things rolling early, they could come away with a victory.

Wrapping up this trip in Utah isn’t going to make things easy for the Nets. The Jazz has retooled their roster this offseason and look to be one of the better teams in the West. If Brooklyn can sneak a victory against them, it’d be pretty incredible. These are the kind of games and matchups where the Nets have to start worrying about injuries. Utah is formidable, this is a long road trip, and the Nets are a team that has horrible luck.

The grit ‘n grind era in Memphis is officially over, but that doesn’t mean playing the Grizzlies at home before visiting the Houston Rockets isn’t going to grind the Nets a little. Brooklyn matches up well versus a team like Memphis, given how fast-paced the Nets play and how many 3s they shoot in comparison. This should be a winnable game if the Nets are cruising along without injuries. By this time, both Jeremy Lin and D’Angelo Russell will be in full stride, taking it to a Memphis team in a bit of a rebuild.

Houston, on the other hand, looks like an unstoppable juggernaut. Brooklyn visiting the Rockets after facing a grinding team like the Grizzlies is my idea of a worst case scenario from a scheduling standpoint. New addition Chris Paul is the perfect type of point guard to expose Brooklyn’s weak point of perimeter defense, James Harden is in the prime of his career, and the rest of the team is built for success around those two players. They should give even Golden State a run for their money.

This back-to-back would give any team a fright; Brooklyn will be lucky to come away with a win in either of these games. The Spurs are always going to be the team to beat in the West. Brooklyn’s only hope is if someone is resting or injured. Even though the Nets will have a great offense that is driven by Lin, Russell, Crabbe, LeVert and others, the Spurs are built to weather most storms.

Going from San Antonio to New Orleans won’t be easy. Pau Gasol and LaMarcus Aldridge will probably wear down Brooklyn’s already weak front-court rotation, so Anthony Davis and DeMarcus Cousins will probably tear through whatever is left of them the following night. If you know me, I am a sucker for really good bigs and long wingspans, and the Pelicans have the two best bigs in the entire league. Brooklyn will have to shoot them out of the gym with 3-pointers if it wants to win.

Deep in the season, both of these teams will be looking to pile up wins. The Milwaukee Bucks have length for days and a player unlike any other in Giannis Antetokounmpo. Things are starting to click in Milwaukee in a big way. Antetokounmpo is learning how to use his body, the team is adding 3-point shooting and defense, and the team is looking like a cohesive unit with each passing game. If Brooklyn wants to make the playoffs, it will have to start getting wins at places like this. The Bucks will most likely be a playoff team, but they are still beatable. Hopefully, Atkinson will be able to piece together a game plan to upset them.

Going from Milwaukee to Minnesota will be no easy task. The Timberwolves are reaching their final form, as Tom Thibodeau has completed his transformation of the Minnesota Bulls by adding Jimmy Butler and Taj Gibson to the roster. This will be a playoff team and a damn good one at that, so the likely tired Nets will have their hands full with Jeff Teague, Andrew Wiggins, Karl Anthony-Towns and more.

Stay tuned for the next two installments in the series and be sure to follow @Brook_Lin_Com on Twitter to stay up to date on all Nets content.