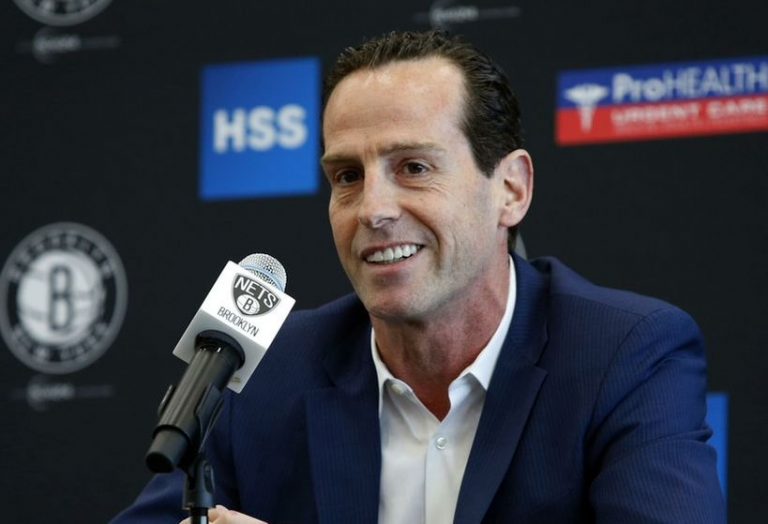 Coming into this season, the expectation for the Brooklyn Nets is that the team is in a rebuilding stage. If the preseason is any indication, this season could be a struggle. They finished the preseason with a 1-5 record and there was a learning curve on both ends of the floor with a new head coach and a new system. The motion offense has received the most attention and while team ball is a positive, many fans have been disappointed that there were not many pick-and-roll plays between Brook Lopez and Jeremy Lin. It makes sense to involve the two best offensive players as often as possible, but as of now, head coach Kenny Atkinson seems to be saving the pick-and-roll for once the regular season starts. He has many new players on the roster and has a difficult job of trying to find the right combination to give the Nets the best chance to win.

One of the goals in the preseason was to experiment with different lineups and as a result, we only saw the starting lineup for a minimal amount of time.  When the starters played, the Nets were competitive, but it was just the opposite when the bench players came into the game. The one constant throughout the preseason was the play of Jeremy Lin (17.2 points on 61.9 percent shooting and 50 percent from three along with 5.6 assists in 23.3 minutes), and he looked like an All-Star point guard in the making. Regardless of the amount of pick-and-rolls, he should have a high usage rate, and that should only mean that his stats will skyrocket along with increased minutes. I predict that he will play around 32 minutes in the regular season. It is no surprise that the national media is starting to pay more attention to what he is doing.

Lin will be driven to achieve individual success and become the best player he could be, but he needs help around him for the Nets to possibly be a surprise team. Among the new guys on the roster, the two players who impressed the most were Joe Harris and Justin Hamilton. They could both stretch the floor with their three-point shooting, and they fit with the motion offense because they will get their spot up along with catch and shoot opportunities. There were not many expectations for either player, but they should both be in the rotation. Harris shot a ridiculous 62.5 percent and Hamilton shot 36.8 percent from three in the preseason. We have to see how they do in the regular season, but I have to give GM Sean Marks credit for signing Hamilton from Europe and Harris who rarely played for the Cleveland Cavaliers.

Atkinson has addressed the importance of team ball from the very beginning when he was hired by the Nets, and Lin agreed that they are working on a variety of plays to fit the different players on the team. To effectively run the motion offense, it requires smart players, shooters, good ball handling, and versatility, which is the model for both the Spurs and the Hawks that the Nets want to follow. However, the mark of a good coach is to adapt to the personnel on the roster, and Atkinson previously said, “I’m definitely not a systems guy.  I think I’m intelligent enough to understand your players, your players’ strengths. I think coaches make mistakes being too attached to their system. Again, when you talk about experience, I’ve been in the European system. I’ve seen Rick Adelman‘s system, I’ve seen Mike D’antoni’s system. I’ve see Mike Budenholzer’s system. I think, man, can I take pieces of all these.”

The logical approach would be to combine the PNR offense of D’Antoni and the motion offense of Budenholzer, but that will be the challenge for Atkinson to be flexible in utilizing his players. Another topic that has gotten a lot of attention is how Brook Lopez does not appear to be a good fit in this offense, as he is staying out in the perimeter shooting threes too often, rather than getting his touches down low and being involved in the PNR. He is one of the best centers in terms of his outside shooting, but clearly he does not have the range from the three-point line. It is possible that Atkinson thinks Brook could expand his range to shoot threes the way Al Horford did as a center for the Hawks, but I don’t think that Brook is capable. Surprisingly, Brook shot 33 percent from three on 2.4 attempts, which is respectable, and he did it in just 16.8 minutes in the preseason. However, that is a lot of shot attempts for a player who averages 9.7 percent from three on only 0.1 attempts per game.

A distinct disadvantage of Brook shooting threes is that he is out of position to rebound and I think when he does shoot it, a majority of the shots should be from the corner, which will increase his chances. He should take a three as an element of surprise rather than standing on the perimeter, which I saw way too often in the preseason. Hopefully Atkinson will have the Brook-Lin PNR in his back pocket and will unleash it in the regular season. For his career, Brook averages 18.3 points per game on 51.1 percent shooting and he has always been a highly efficient offensive player, as his PER is 21. He averaged 20.6 points on 51.1 percent shooting last season. The motion offense is designed to produce balanced scoring, but Brook will have to remain an efficient offensive player who will do most of his damage inside.

Even with less pick-and-rolls, one thing I do like about the motion offense is that Lin gets the ball back most of the time after he makes the initial pass to a teammate. I have bad memories of watching Carmelo Anthony, James Harden, Kobe Bryant, and Kemba Walker playing ISO while Lin was a spectator. Lin will have plenty of opportunities to make plays as well as score and as of now, he is the number one option on offense. It remains to be seen how much more Brook Lopez will be involved in the offense during the regular season, but Lin will be heavily featured regardless. The last time he was this much involved in the offense, Linsanity happened. I am so ready to see it again.

I anticipate a few changes for the start of the regular season on offense, and I am hopeful that the starters will be competitive in most games since the bench looks weak. The starters appear to be set (Jeremy Lin, Randy Foye, RHJ, Trevor Booker, and Brook Lopez), but I’m hoping there could be a change at SG.  Randy Foye is a veteran who could provide leadership, but his game is on the decline and I would rather see Bojan Bogdanovic in the starting lineup to provide more spacing. In his last two seasons, Foye shot 36.8 and 35.1 percent respectively, which is terrible and he is just a 40.2 percent shooter for his career. If Foye does start, he will play limited minutes and both Sean Kilpatrick and Joe Harris will most likely share playing time at SG. Harris is 6-foot-6, so he could get additional playing time at SF especially if he keeps shooting the ball well.

Versatility is important and it is possible that Kilpatrick could be the odd man out. He struggled in preseason (35.7 percent shooting and 31.2 percent from three while Harris was terrific. Harris also got more playing time (19.7) minutes per game compared to Kilpatrick (17.8), which was certainly a surprise that nobody saw coming. If Bogdanovic does come off the bench to start the regular season, he could provide a spark off the bench with his shooting. Coming off his very good Olympic performance, he did well in preseason as he shot 48.6 percent from the field and 47.6 percent from three. He is the best shooter on the team, and he needs to be more consistent in his third season.

I would feel better about the bench if Greivis Vasquez was back to his form from his injury, but he had a real rough preseason as he shot only 25 percent from the field and 15.4 percent from three. He did show some improvement towards the end of preseason, but Lin may have to play more minutes in the regular season than anticipated if Vasquez struggles. The Nets front office and coaching staff had expectations for Isaiah Whitehead as a rotational player at PG this season, but he clearly looked to be overmatched against NBA talent. He made the roster for the regular season and Yogi Farrell was waived instead, as he will be playing in the D-League. It was previously reported that Whitehead will also be spending time in the D-League this season.

A player whose game I always respected as a good and smart basketball player is Luis Scola. He has a high basketball IQ, which is easy to see, and he is like a wise coach on the court. Scola has made numerous nice passes to cutters in preseason as well as take charges on defense, although he is not known as a good defender. Offensively, he could score points in the paint and he hit 40.4 percent of his three-pointers for the Toronto Raptors last season. He is a stretch-four, and he will be a stabilizing influence off the bench who will show the young players how to win. Although he is physically limited, he has had a solid career in the NBA, as well for his home country Argentina.

Whether it is the starters or the bench, expect the Nets to hoist up a lot of three-point shots, and the team took over thirty three-pointers per game in preseason. As long as the ball movement provides open looks on a consistent basis, it is a good shot, but it remains to be seen if the Nets have the shooters to make it work. Good three-point shooting can cover up deficiencies with the team, but if you live by the three, then you could also die by the three. Teams tend to be streaky with three-point shooting, so this is where Lin’s ability to score driving to the basket and Brook’s scoring inside will make a big difference.

The defense is certainly a bigger concern than the offense, but a positive is that the best defensive players in the starting lineup played limited minutes together in the preseason. For example, Lin averaged 23.3 minutes, RHJ played 21.6, and Booker 21.5. I expect all three players to receive considerably more playing time in the regular season. I knew how good both Lin and RHJ are on defense, but I was pleased with the hustle, effort, and rebounding that Booker displayed in the preseason. He averaged 6.8 rebounds in 21.5 minutes and he was also aggressive in crashing the offensive boards. Lopez needs a tough PF next to him, and Booker looks like the man for the job.

Kenny Atkinson has said that the team has spent the majority of time on defense in training camp along with the practices, and he stated that they are set with about 80 percent of their defensive sets. Well, they certainly did not show it in the preseason, and they better turn it up a lot in the regular season to be competitive. For sure, we will see new wrinkles we have not seen yet, and the intensity will be a lot higher. Atkinson said that the offense may lag behind, but the offense looks ahead of the defense at this time.

The Brooklyn Nets are a rebuilding team at this time, and the fans will require patience as it is likely that this season will be a struggle. There is a long-term goal, and we have to give Atkinson and the players time to figure it out. With Lin leading the way, I’ll take my chances.