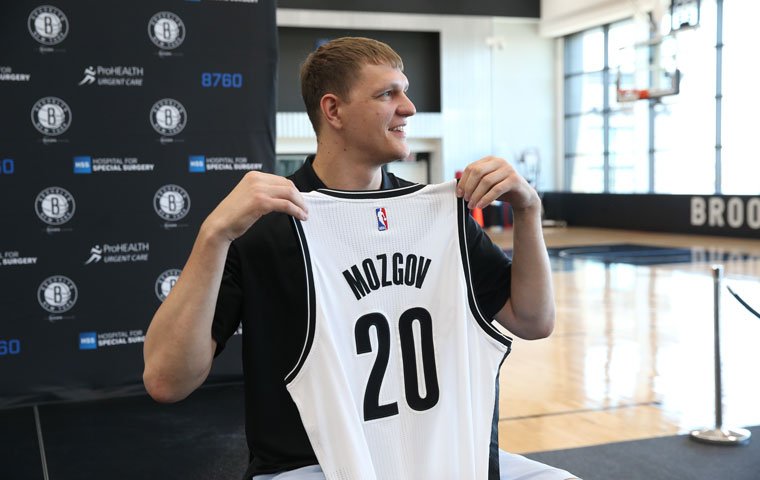 A lot has been written about the pre-draft trade between the Brooklyn Nets and Los Angeles Lakers, but little has been said about the second player Brooklyn got in the deal — Timofey Mozgov. Most fans let out a groan when they heard his name attached to D’Angelo Russell‘s, but Brooklyn should embrace the veteran big with open arms, given that he can fill some much-needed roles.

Mozgov should have no trouble adjusting to life in New York; he started his career with the Knicks back in 2010. After getting off to a promising start in New York, he was shipped to Denver as one of the key pieces of the Carmelo Anthony trade.

While with the Nuggets, Mozgov got the reputation of being a bruising big man — someone you could count on down low to alter shots, pull down rebounds and bully weaker defenders for easy buckets in the paint.

It was this reputation that led Cleveland to trade for him in a move to bolster their roster for the 2015 playoffs. Mozgov would go on to play a crucial role for the Cavs during the 2015 playoffs, where they came up short against Golden State in the Finals. He played a slightly smaller role the following season, which ended with Cleveland’s first NBA championship.

Last offseason, Mozgov signed a four-year, $64 million contract with the Lakers that everyone knew was a bad deal. The trend was to sign inflated contracts because the overall cap space under the new Collective Bargaining Agreement was going to see a significant jump, but this was not the move of a team in full rebuild, like they were.

The Lakers were brimming with young talent that needed to be developed, and the last thing they needed was a 30-year-old big whose skill-set was quickly becoming obsolete. They needed to get his money off the books, especially if they thought they could lure a big name free agent in 2018.

So here we are. Timofey Mozgov is now a Net, and I am sure the average fan is hitting the panic button. A roster that was just a few players away from really competing in an ever-weakening Eastern Conference is missing their longtime cornerstone. But fear not, Mozgov is far from just a bloated contract. What he offers are all things the Nets need in the locker room — interior defense, rebounding and another veteran presence for the young players.

Mozgov has an incredible physical profile for an NBA big. Standing at 7-foot-1 and boasting a wingspan over 7-foot-4, Mozgov is what you would want in an interior defender. He understands the law of verticality, is almost immovable on the low block because he weighs over 275 pounds, and has long arms that are great for disrupting passing lanes on the pick-and-roll and snatching rebounds off the glass.

At times in his career, Mozgov has been an animal on the boards. His best rebounding year came in 2014-15 when he was moved to Cleveland. He averaged 7.3 rebounds per game in the regular season, while matching that number in 20 playoff starts. His career-high in rebounding came in 2014 against Golden State, when he pulled down 29.

Hopefully, Mozgov will be able to tap into whatever made him worth $64 million over four years, because last season seemed like a pedestrian one. He averaged 7.4 points, 4.9 rebounds and 0.6 blocks per game in just over 20 minutes of action. He shot 51.5 percent from the floor, while starting in 52 games last season. If it wasn’t for the Lakers shutting him down halfway through the season in order to get young players more action, he could’ve probably justified his high price tag.

Durring Jarrett Allen‘s introductory press conference, Head Coach Kenny Atkinson said there would be an open competition for who gets the start at center, but it would be shocking if Mozgov wasn’t the starter on day one.

While Allen is the future, Mozgov brings a wealth of experience and is just too expensive to not play. I expect him to take on a Randy Foye-esque role for Brooklyn as a starter, coming in and playing the beginnings of quarters, before hitting the bench for the young players. Given how thin the front-court rotation is in Brooklyn, Mozgov stands to have one of the best years of his career. Atkinson’s motion offense will limit him offensively, given he has little to no midrange game, but Mozgov will have the opportunity to pull down rebounds at an incredibly high rate.

I am probably setting the bar too low for Mozgov, but if he can average around seven points, six to seven rebounds, and one block next season, I would be satisfied. He turns 31 later this July and is probably going to start declining soon. Most bigs with his physical profile usually see similar downturns at his age. If he can stay healthy and play smart basketball, Mozgov’s time in Brooklyn could be shockingly pleasant for everyone involved.