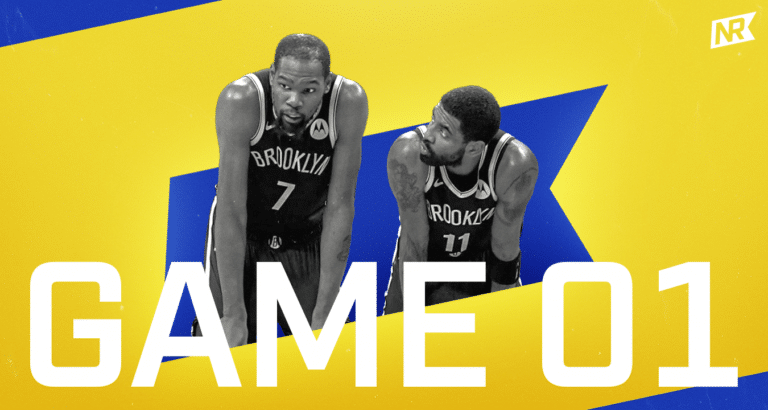 Three Takeaways From the Brooklyn Nets’ Season Debut Against the Warriors

In dominant fashion, the Brooklyn Nets defeated the Golden State Warriors in their season debut. Here are three takeaways from the victory.

Well, that was worth the wait? Wasn’t it? It’s been 541 days since the infamous “Clean Sweep” tweet, but the Brooklyn Nets ensured nothing short of pure bliss for their fanbase in the first game of this new era.

From start to finish, the Nets were in complete control of the Warriors. Ball-handling aficionado Kyrie Irving sprinted out the gates, compiling 24 points alongside Kevin Durant and Caris LeVert, who both scored 12 points, respectively, in the first half.

As far as debuts go, you really couldn’t have asked for a better possible outcome. With that said, without further adieu, let’s look at some takeaways.

You’ve heard of “untucked” Kyrie, sure, that’s an unstoppable god-like entity, I’ll give you that, but regular-season debut Kyrie is nipping at his alter-ego’s heels as the most dominant variation of himself.

Never one to shy away from the Stephen Curry matchup, Irving brought the fight to the former unanimous MVP and the Dubs. The full repertoire was on display for the masses. The shot-creating abilities that define what seems possible, the otherworldly degree of difficulty in his attempts, Kyrie Irving reached into his proverbial bag of tricks and had some fun.

Kyrie is dancing on the Warriors 😳 pic.twitter.com/b1gj218XEr

Irving finished the contest with 26 points on 10-16 shooting, including four-of-seven from distance in his 25 minutes of action. He was also a plus-32 in his minutes — which will happen when your team is dominating and you can’t seem to miss.

Don’t let this headline fool you. This is a good thing. A beneficiary of KD/Kyrie’s gravity on opposing defenses, Joe Harris is going to get clean, wide-open looks. We know that. However, once defenses inevitably tighten up come playoffs, those “wide-open” looks will lessen in volume.

So … Harris is going to have to take some “bad shots.” Be it contested looks, pull-ups in transition from several feet beyond the arc, or shots coming off curls where he has to either contort his body mid-air or launch jumpers sans the ball in his shooter’s pocket.

The good news being, however, is there really isn’t such a thing as a “bad shot” for Harris. Tentative in the Nets’ preseason debut against the Wizards, Harris’s malleability is once again glaring. Since then, we’ve seen him significantly more aggressive in looking for his shots — something KD, himself, mentioned as a need.

After connecting on multiple contested three-point looks against the Celtics on Dec. 18, Durant told Tom Dowd of BrooklynNets.com that (Brooklyn) is “gonna need him to hit more of those.”

Listen, I’m ready to start overreacting. Yes, I understand that the Brooklyn Nets have played all of one regular season. No, I don’t particularly care. Caris LeVert, whose play earned him an “All-Bubble Second Team” nod this past summer, is continuing his upward trajectory in this young … very young campaign.

Immediately looking to attack, LeVert’s command of the second-unit was plenty of fun to witness. Once team’s deal — or fail to deal, as in the case of the Warriors on Tuesday — with Durant and Irving, here comes LeVert, multiple catch-and-shoot threats, and an elite rim-running big in Jarrett Allen off the bench for Nash and company. It’s borderline comical.

Once more, LeVert’s three-point looks, be it on a marginal sample size … since, you know, it’s the first game of the season, have looked pure. Last season, on 1.7 catch and shoot triples per contest, LeVert connected on a glaringly inefficient 31.7 percent clip — though he shot 38.7 percent on 3.2 pull-up threes per game. (Per NBA Stats.)

If he’s able to combine the best of both three-point shooting worlds and even shoot at a league-average percentage, which was 35.8 percent last year, compounded with his ability to get to the rack with ease and create for others, Caris as a sixth man is going to be a major issue for opposing teams.

It was a blowout from start to finish, there isn’t much to complain about here. Something tells me this won’t be the first time Brooklyn runs teams off the court by the time the fourth quarter arrives. Thus begins the Brooklyn Nets’ ascension in the NBA’s power rankings.