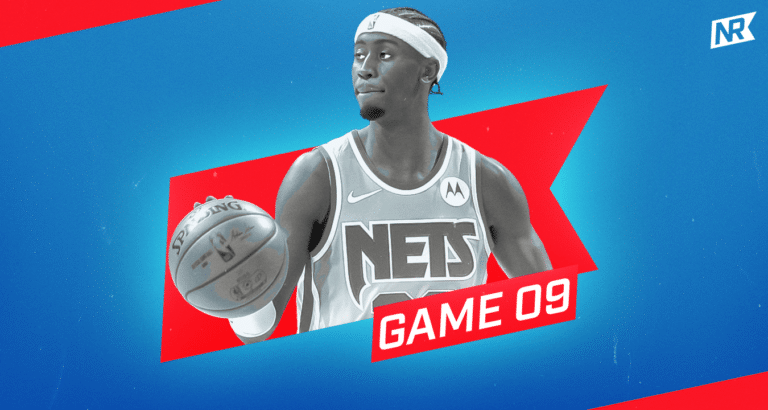 Three Takeaways From the Brooklyn Nets’ Win Over the Philadelphia 76ers

Despite being without their two stars, the Brooklyn Nets took care of business in front of a national audience Thursday night, beating the Sixers 122-109. Let’s get into some takeaways.

Rocking the Drazen Petrovic-era jerseys for the first time the season, the under-manned Brooklyn Nets put on a show. With such an encouraging —yet odd win — here are three takeaways.

Unbelievably, incomprehensibly, and inconceivably this Brooklyn squad always seems to find a way to win games when their stars are sidelined. Carrying some of the magic they found in Disneyworld this past summer, a depleted Nets squad once again found a way to beat a top-tier team. Coming into Thursday night’s contest, the Sixers sat at 7-1 on the season as they’d started to mesh under new head coach, Doc Rivers.

The Brooklyn Nets didn’t make too many mistakes, only coughing the ball up twelve times whilst taking advantage of Philadelphia’s sloppy play. The Sixers committed 20 turnovers Thursday night with Brooklyn netting 35 points off said errors.

Guys like Taurean Prince, Chris Chiozza, and Timothe Luwawu-Cabarrot provided vital complementary play as they were just a few of the many who stepped up in bigger roles for the Nets. That’s been a common theme for this organization of late. One only hopes that some of that production can carry over when Kevin Durant and Kyrie Irving return to the active roster.

Amazingly, Brooklyn is 2-0 since Kevin Durant has been in quarantine due to COVID-19 contact tracing. While I’ll leave the “is Brooklyn better without Durant and Irving” takes for the national media, it’s quite the feat for this group to have rallied and nabbed wins against two good teams.

In comparison to Ben Simmons and Joel Embiid‘s combined 31 points, Brooklyn’s two ‘stars’ in Joe Harris and Caris LeVert totaled 50 (!!)  points —- returning to their ‘bubble’ form to lead the way for the Nets. Though LeVert scored 22, he continued to struggle from the field. He finished the game 9-25 from the floor, 0-5 from three, and an ugly 4-10 from the line. But, given last night’s lineup reliance on him as a facilitator, that type of efficiency is warranted. He was the fuel for Brooklyn’s offense against the Sixers, also dishing out 10 assists.

LeVert’s performance is encouraging considering some of his issues of late. Against Philadelphia, he appeared more in control and more aggressive. And, when Caris is both aggressive and smart, he’s an incredibly dangerous scorer who is more than capable of spreading the wealth. Hopefully, we’ll see more of this LeVert moving forward.

Off the bench, Joey “Headband” Harris came up big, scoring 28 points, while grabbing six boards, contributing four assists, and shooting 10-18 from the floor and five-for-eight from behind the arc. Once again, we’re witness to the type of player Harris could be if had a higher usage on a poorer team. In fact, in the second quarter, Harris went on his own 10-2 run in just 1:23 of game time.

Bringing Harris off the bench may not be a long term solution for the Brooklyn Nets once Irving and Durant return to the lineup. But, it’s still a welcome sign that Harris can be successful when he is forced to take a higher volume of shots while defenses are keying in on him.

With Philadelphia coming off of a back-to-back, Brooklyn’s starting frontcourt of Jeff Green and Jarrett Allen gave both Simmons and Embiid issues in the early going. Their physicality deterred the Philadelphia stars’ all night, as they shot a combined 9-25 from the field.

Allen, in particular, put up a massive performance against Embiid as he also added 15 points on just six shots, along with 11 rebounds, and three assists. Off the bench, Green contributed 14 points along with a pair of triples. DeAndre Jordan also provided some nice physicality off the bench. While his minutes continue to —rightfully — diminish with Allen’s surge, he’s still a veteran big man who can compete defensively.

All in all, this was a great win against a good Philadelphia team. Role players stepped up displayed what they can do with bigger roles. But, ideally, the Brooklyn Nets will get both Irving and Durant back next week and count on them to provide elite play, while also continuing to get meaningful contributions from the Nets who stepped up last night.