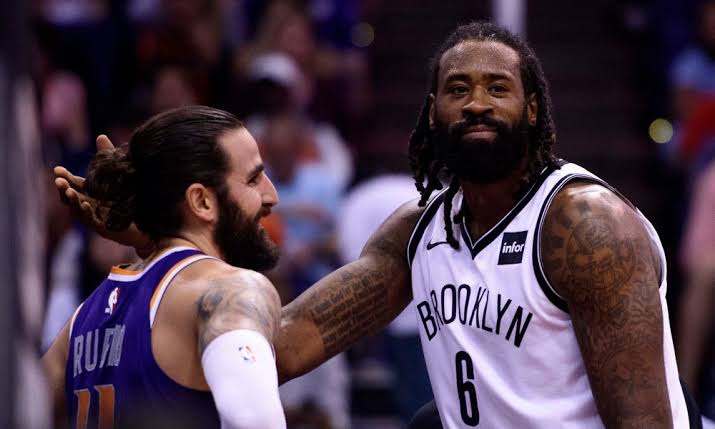 Welcome to the second edition of The Neatest Nets Numbers, where I rant about the most entertaining numbers attributed to this year’s Brooklyn Nets squad. Brooklyn’s extravagant mediocrity resulted in some numbers that, as the title would indicate, I find pretty neat.  Last time, we covered Theo Pinson’s record-setting expedition as Brooklyn’s part-time point guard. Today’s numbers come from DeAndre Jordan, we.

Last summer, I worked as a basketball counselor at a sports camp nestled away in the green thickets of Maine. As activities commenced in late-June, I convinced anyone with ears the Nets were in for a big offseason. The signs were there. Kyrie Irving was rumored to already be within Brooklyn’s grasp. General manager Sean Marks had just engineered a brazen salary dump to clear space for a second max contract. The market’s Catch-of-the- Day, Kevin Durant, was going to spend the following season rehabbing his freshly torn Achilles. And sure enough, Brooklyn could support him with the NBA’s premier training facility and medical staff. It made too much sense.

In convincing others, of course, I was convincing myself. I couldn’t believe my lovably nondescript Nets could be on the verge of such a haul. Others shared that disbelief. My fellow counselors quickly gave up arguing with me. In chatting with parents dropping their sons off for the summer, the NBA was always a topic. When my expectations for Brooklyn came up, so did furrowed brows and a high-pitched “really?”.

Sure enough, scoop-guru Adrian Wojnarowski dropped the bomb of Brooklyn’s “clean sweep” on the NBA before free agency officially began. Kyrie Irving and Kevin Durant were going to be Nets. Also DeAndre Jordan is coming, I guess?

Hold on, $40 million over four for DJ? As we quickly learned of the package-deal nature of the trio’s free agency request, the Nets investment in DeAndre Jordan justified itself. But man, in a vacuum, committing that much to an aging big man who hadn’t looked particularly interested in basketball the previous year? Sure, Jordan was twiddling thumbs on two bad teams, but this contract coupled with the immediate question of Jarrett Allen‘s development was no cause for joy. In terms of NBA subplots, Brooklyn’s center situation was bound to be one of the stranger ones.

Fast forward nine months, and it did indeed play out strangely. DeAndre Jordan, still wont to drag his feet around the hardwood like it’s a house chore, became the Nets’ most valuable defensive player.

The stat this number reflects is Defensive Player Impact Plus-Minus, (DPIPM). PIPM has gained traction as a favored advanced metric among the basketball community over recent seasons. As a novel plus/minus stat, it combines traditional box-score data (e.g. rebounds, steals, points), with luck-adjusted play-by-play data. While the umbrella of “luck-adjusted” data is imperfect, it attempts to minimize the effect of what players have limited control over, such as an opponent’s free-throw shooting.

Per usual, there are caveats to consider when evaluating advanced metrics. Defensive plus/minus stats in general tend to overvalue the big men, as their defensive contributions are much more likely to show up in the box score in the form of rebounds and blocks. As always, advanced statistics aren’t meant to replace the eye-test when evaluating players, but merely to serve as peripherals in sorting out data. The DPIPM leaderboard isn’t a list of the best defensive players in the league, unless you interpret it that way. But you probably shouldn’t .

With that out of the way, we’re free to analyze DeAndre Jordan’s impact on the defensive end. It was hard to believe the same Jordan that nearly won Defensive Player of the Year as a Clipper just seasons ago was withering away in Dallas and New York in 2018-19, at times miming a traffic cone in the middle of the lane. Optimists contended his effort would exponentially increase on a playoff-bound Brooklyn squad.

Early on, Jordan’s sluggish tendencies continued to weigh down his productivity. But as he, the staff, and his teammates grew more acclimated, Jordan grew into the vocal leader and defensive communicator he was praised as in Los Angeles. And by the presumptive end of the regular season, he felt like a must-play in crunch time.

Somehow, DeAndre Jordan, who occasionally looked like a liability on the court in the Fall, entered the Spring hiatus with his DPIPM at 2.35, our second Neatest Nets Number. That 2.35 rating ranks 20th in the NBA, 57 spots ahead of teammate Jarrett Allen, who posted a DPIPM of 1.04.

That 2.35 feels representative of Jordan’s defensive contributions for Brooklyn this year. Shocking to say for a big man who looked this averse to fulfilling his weak-side help duties:

Forget cracking the NBA’s top 20 on the DPIPM leaderboard, how did he leapfrog rotation mate Jarrett Allen, whose career-defining trait up to this point has been his penchant for launching into harm’s way? DeAndre Jordan doesn’t create chaos at the rim like this anymore:

What he does do though, is station his bulky 6’11”, 265 lb frame right in the middle of the paint, night after night. It’s the byproduct of a defensive principle Brooklyn lived by this year: put the biggest dudes close to the basket. This philosophy mandated the Nets run one of the more exaggerated “drop” pick and roll coverages the NBA has seen. As the coaching staff forced guards to fight over the top of screens, DeAndre Jordan utilized his elite communication skills to survey the floor and bark out instructions.

This is where the DPIPM of 2.35 rounds into shape. With Jordan on the floor, Brooklyn goads ball-handlers into taking the NBA’s shot-non-grata: contested mid-rangers.

It really looks unfair, doesn’t it. Joe Harris and Spencer Dinwiddie attached to the bodies of their men, while DJ gets to amble around the paint. But this possession perfectly encapsulates the end goal of Brooklyn’s scheme. Jordan directs traffic, calling out obstacles for the guards, and then forces Denzel Valentine into a tough floater.

This defense, of course, has its drawbacks. Kemba Walker nearly ruined Brooklyn’s comeback in Boston by coming off screens near mid-court and walking into pull-up threes. But by and large, DeAndre Jordan forced plenty of tough, low-reward shots for the opponent. His high DPIPM reflects that.

By no means did Jarrett Allen have a poor defensive season. His DPIPM of 1.05 suggests he added more than a point of value per 100 possessions on the defensive end. But visible weaknesses popped up throughout the season that help explain his lower DPIPM score, despite more blocked shots.

Allen’s twitchy demeanor on D helps him maneuver around the paint with gusto when pressure arrives, but it actually hinders his ability to defend in space.

On the first two plays, Allen is caught in no man’s land. By falling back in the paint, but not deep enough to stymie the roll man, he takes neither option away. On the last play, Allen fakes towards the ball-handler without forcing him to pick up his dribble, leaving the basket unprotected.

Dropping against the Pick and Roll as a big man is one of the hardest skills to master. Resisting the urge to lunge forward and meet the guard cruising downhill, all while keeping an eye on the roll man, is a lot to handle. It requires the big man to be comfortable operating in open space, a different set of instincts than meeting someone at the rim.

Opponents shot just 40.5% from the floor with DeAndre Jordan as the primary defender, an elite number that places him 10th in the NBA. That mark is due in no small part to Jordan’s advanced comfort level in meeting guards in open space and coercing them into difficult shots. For Jarrett Allen, that figure softens to a merely respectable 44.6%.

But perhaps the biggest difference between Brooklyn’s twin towers regards their proficiency on the defensive glass. Part of the Nets’ stay-at-home order placed on their bigs is that it puts them in perfect position to nab misses. DeAndre Jordan collected an astounding 34.2% of all available defensive rebounds this season, good for the third best mark in the league. Conversely, Allen’s defensive rebound rate is a less impressive 25.0%. As lumbering big men sneak behind him in the paint, not only does it create passing lanes, but it also takes Allen out of prime rebounding position.

In examining Jarrett Allen, we can see the immense defensive value DeAndre Jordan brings to Brooklyn. The Nets haven’t even played a full season of basketball since their 2019 postseason defeat at the hands of Philadephia, who manhandled them all series on the glass. Now they employ a bonafide rebounding star. In keeping with analytics, the Nets implemented major changes to their schemes to create a more ideal defensive shot profile. DeAndre Jordan has shown he’s the man to enforce that goal. That top-20 DPIPM mark feels more than earned.

That About Sums It Up

I present to you, the Nets most impactful defensive presence!