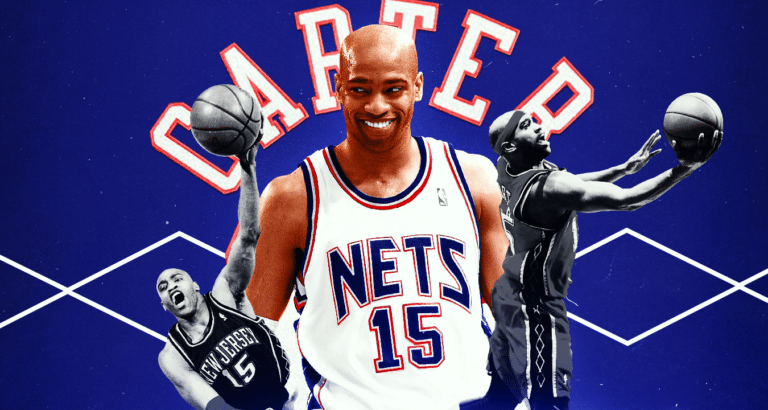 The End of Vinsanity: On The Retirement of Former Net Vince Carter

I first got really into the NBA in 2001. I was spending a lot of time at my grandparent’s house and they only have over-the-air television, which meant one of the only things to watch at night was Houston Rockets games on TV51. I fell in love with the sport, with that love expanding outwards from the Rockets to the rest of the league. To me, that era was the best one for NBA basketball because it was the one that was formative for me.

But one-by-one, all the stars of that era retired, until the only one remaining was Vince Carter, who officially announced his retirement from the NBA last week:

Carter was an incredible talent. I didn’t see a ton of him live because I was mainly watching the Western Conference, but I saw plenty of highlights and spent a lot of time playing as the Raptors on NBA Live 2003. I would take over games with Vince, going for insane point totals and crossing the CPU players over repeatedly, then driving in for the jam. Vince Carter was everything I wanted a video game basketball player to be.

That athleticism faded in real life as the years went by in Carter’s career, but he always managed to adjust, to stick around, to find ways to continue impacting games. Carter was traded to the New Jersey Nets during the 04-05 season, making All-Star appearances in his first three seasons with the team. But the 2006-07 season — which saw Carter averaged 25.2 points per game along with 6.0 rebound and 4.8 assists — marked the final All-Star appearance of his career. His final season with the Nets in 2008-09 marked his final season with a 20+ point scoring average.

But still, Carter stayed around. His average shot attempt distance rose as the second stage of his career went on. The percentage of his three-point attempts he took that were assisted rose. Carter became a role player — a really good one — and even shifted to power forward more often after turning 40.

With Carter’s retirement official, let’s look back specifically at the Nets portion of Vinsanity’s career.

Ask anyone outside of the Nets fandom what team they most associate Carter with and you’ll get a pretty clear answer: the Toronto Raptors.

It makes sense. His iconic 2000 Dunk Contest performance came in a Raptors jersey. He was the first star for that team. And his well publicized desire to leave Toronto is still something that people bring up when talking about his career.

But a good portion of Carter’s prime came in New Jersey, and he made a pair of trips to the Eastern Conference Semis in a Nets uniform.

For a look at Carter’s best plays with the Nets, check out Geoff Magliochetti’s look at the 15 best Vince Carter plays from his time in New Jersey.

That Nets team never got over the hump and failed to make the playoffs in Carter’s final two seasons before he was traded to the Magic for Rafer Alston, Tony Battie, and Courtney Lee.

In particular, Carter’s passing was something that doesn’t get discussed enough about his Nets tenure. While the highest assists rate of his career was in the 03-04 season with Toronto, his next five highest marks came in Jersey. Carter gained a deserved reputation as a scorer in Toronto, but the Nets were where he showed off how well-rounded his game could be.

Carter’s Nets years also happened to correspond with a pretty talent-deficient time for the team. The final playoff team had Carter, Jason Kidd, and Richard Jefferson — a strong top three, though Jefferson played just 55 games — but beyond that, the team gave heavy minutes to guys like Nenad Krstic, Mikki Moore, and Jason Collins.

By the next season, the lack of depth began to show. Jason Kidd was traded to the Mavericks in February for a collection of players headlined by Devin Harris, and the team won 34 games. They repeated that mark the next year, and then that was all for Carter’s time with the team.

That final season with Carter in New Jersey felt like a changing of the guard. A 25-year-old Devin Harris and a 20-year-old Brook Lopez were second and third on the team in minutes per game.

You just need to look at how many nicknames Vince Carter has to know that he’s an important part of NBA history:

At its heart, basketball is a game, and games should be fun. That was what drew so many people to Vince Carter early in his career, I think: he was fun.

He was more than just fun, though. He was mesmerizing. He was an airplane taking off from the lane. He was a hammer. He was one of those bouncy balls that you get out of the quarter machine at CiCi’s. Vince Carter was just unlimited bounce.

And sure, that’s oversimplifying things. Vince Carter was significantly more than a collection of dunks from the first few years of his career. He became a knock-down shooter. He was fifth among active players in career steals at the time he retired. He was a solid defender and has a career PIPM of 2.06 even though the final years of his career saw him become increasingly less efficient.

And also, he played for SO long. The human body shouldn’t be capable of playing 60 NBA games at age 43, much less averaging 14.6 minutes and scoring 5.0 points per game and grabbing 2.1 rebounds. Those numbers might not look great, but don’t forget that Carter was a 43-year-old role player on a bad Hawks team.

Carter’s longevity and his ability to adapt into lower usage roles later in his career has to be as much a story as the dunks. This wasn’t just some guy who could dunk a basketball. We’ve seen plenty of guys whose only skill was athleticism; they’re out of the league by 30. Athleticism is how Carter made a name for himself, but he stayed in the NBA forever because he could do so many things well on a basketball court.

So, what next? The Nets should retire his number, for one. Carter might not have brought a title to New Jersey, but he was an integral part of some teams that probably shouldn’t have been as good as they were, and Carter is an NBA legend who spent four and a half seasons with the team.

After that, he should head to the Hall of Fame. I’ve seen a few people online say that Carter’s not a Hall of Famer, to which I’d say “yes, he is.” Carter’s longevity and cultural impact and scoring prowess are all positive marks for his Hall candidacy.

And so, with Vince Carter retired from the NBA now, let’s take one more chance to remember his most memorable moment:

Thanks for everything, Vince!