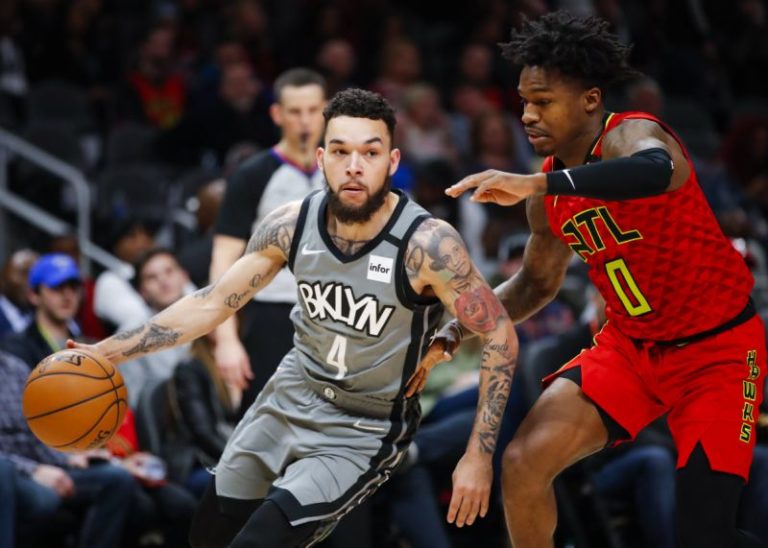 The Brooklyn Nets needs to sign Chris Chiozza for the playoffs

With the NBA season postponed it’s hard to truly wrap oneself around NBA content. Obviously it is a disappointment however, just because the league is on a hiatus doesn’t mean some quality basketball content has to be too. With the firing of Kenny Atkinson, the play of G-League call up Chris Chiozza has been something that has flown under the radar to all except the Nets faithful. With the Nets currently in a playoff push, it is imperative that they sign Chiozza for the playoffs, whenever that might take place.

When the NBA season was put on put on pause the Brooklyn Nets were coming off of their second-best win on the season. A nail-biting win against LeBron James’ Lakers who just so happen to be the number 1 seed in the Western Conference. Although Spencer Dinwiddie was the hero of that game hitting the game-winning shot in the final minute it was Chris Chiozza who provided a spark for the Nets in the second half and ultimately kept the Nets in a position to win.

This has been a trend over the team’s last few games for the 5’11 PG out of Florida who Nets fans have nicknamed “Cheese”. In the month of March, which coincidentally has been the games Chiozza had been playing meaningful minutes, he is averaging 10 ppg, 2.6 apg, and 3.2 rpg. Shooting splits wise he is shooting 55.9% from the field and 52.6% from 3-point range. Granted the sample size is minuscule. I mean anyone can have a hot two week stretch in the NBA right? Just ask the Sixers’, Shake Milton. However, this isn’t just any random hot streak. Chiozza’s play as of late has shown the biggest hole (aside from a solid stretch 4) on the Nets for the majority of the season and that’s a true backup point guard.

Now when Kyrie was in the lineup the backup guard duties were relegated to Dinwiddie naturally. However, with Irving playing only 20 games on the season Dinwiddie was thrust into the starting role leaving the Nets with no true backup for him. Kenny Atkinson had experimented with Caris LeVert at the guard spot while Dinwiddie would be on the bench. And although LeVert is a more than capable ball-handler it was clear he isn’t as effective as playing off the ball.

This is where Chiozza enters the equation. As we all saw on that fateful Tuesday night when Chiozza entered the game and every game since, he exudes everything you would want in your backup point. He’s a pass-first guard who isn’t afraid to take it into the teeth of the defense. Although he’s on the shorter end of the height scale his court vision is something to behold. He can thread the needle and add some extra zest to his passes when need be as well as hit the occasional three. As mentioned before he is shooting over 50% from deep.

As with many good things in life, Chiozza comes with a price. The scrappy guard is currently on a two-way deal with Brooklyn which would make him ineligible for the playoffs. Chiozza had previously been with the Washington Wizards’ G-League affiliate for the majority of the season appearing in 10 games for the big club. Since David Nwaba was lost for the season back in December the thought was that the Nets would use their DPE (Disabled Player Exception) to sign someone. However, the deadline for that has since expired which means the only way for Chiozza to play during the playoffs is if Brooklyn cuts a player.

Now there are two obvious choices for who the Nets would cut if they decide to go that route. One option would be Theo Pinson. Now Pinson has been more of a morale booster than contributor this season. Even when he was inserted into the rotation in December and January he didn’t live up to expectations. Whatever they were. The other option would be a dark horse in Dzanan Musa who is currently in year two of a four-year extension. Musa is another player who has not lived up to expectations with inconsistent play. However, he is only 20 years old.

Whoever the Nets decide to release in order to clear up a spot for Chiozza will not be in any way contradictory of the magic word “culture” or upset fans in the slightest. So far Chiozza has shown he can provide a great service as a backup point guard for Brooklyn. Plus seeing how he fares in the playoffs can be a determining factor in whether Brooklyn decides to sign him for next season.