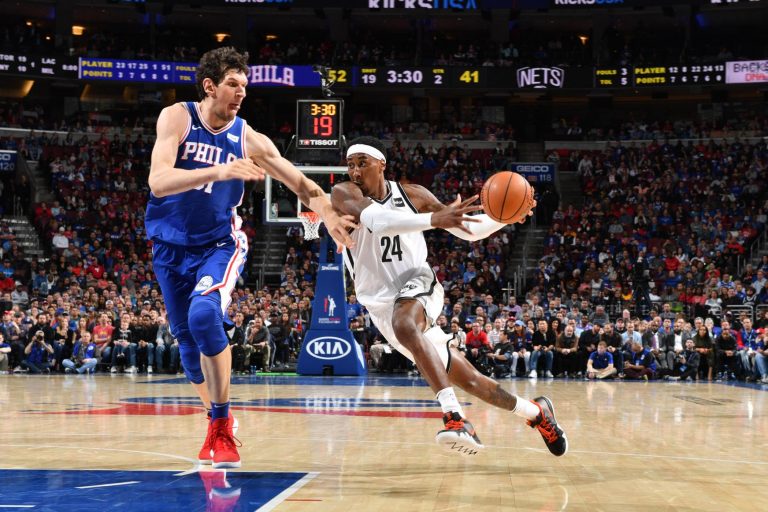 PHILADELPHIA, PA - MARCH 28: Rondae Hollis-Jefferson #24 of the Brooklyn Nets drives to the basket against the Philadelphia 76ers on March 28, 2019 at the Wells Fargo Center in Philadelphia, Pennsylvania NOTE TO USER: User expressly acknowledges and agrees that, by downloading and/or using this Photograph, user is consenting to the terms and conditions of the Getty Images License Agreement. Mandatory Copyright Notice: Copyright 2019 NBAE (Photo by Jesse D. Garrabrant/NBAE via Getty Images)
Home
Brooklyn Nets
Justin Thomas

The Bobi & Tobi Show has been the X-Factor this Series

This Nets/Sixers series has been arguably the most entertaining series from both a basketball and storyline point of view during the first round of the playoffs. The star players for the Sixers such as Ben Simmons, Joel Embiid and Jimmy Butler have each stepped up and shown why they are All-Stars. However, two guys have flown under the radar for their contributions in this series and have given Brooklyn fits: Tobias Harris and Boban Marjanovic.

The Impact of Bobi and Tobi

It’s no coincidence that the only game the Sixers lost in this series was the game where Harris and Marjanovic did not have good games. In Game 1 of the series, nobody but Jimmy Butler showed up for Philadelphia. Tobias Harris played 41 minutes in that game and only scored four points on 2-for-7 shooting. Although he pulled down seven rebounds and dished out six assists, he was, for the most part, a non-factor. Boban, on the other hand, had a better offensive game but didn’t have as much of an impact due to his deficiencies on the defensive end. In only 15 minutes, he scored 13 points; however, Brooklyn’s use of the pick and roll limited the amount of time Boban saw action. Both guys had a plus/minus of +3 that game as well.

Now Games 2-4 were a complete 180 for the Bobi & Tobi Show. Although it was a back and forth game throughout the first half, the Sixers blew the game open with their record 51 points in the third quarter. Harris and Boban each scored double digits as Tobias went for 19 points in 29 minutes, while Boban went for 16 points and eight rebounds in 18 minutes. Even though Marjanovic’s plus/minus was only +1, Harris’ was +30. Game 3 was Harris’ coming out party for the series. In an important Game 3, Tobias went 11-for-20 from the field including a perfect 6-for-6 from three-point range. Combined with the great shooting of J.J Redick, it seemed as if every time the Nets tried to come back in the game, Harris was there to slam the door shut. Once again his plus/minus was a staggering +23. Boban had another strong game as well as being a force inside especially on the boards. Game 4, which was easily the most competitive game in an already competitive series, saw Boban not be as much of a factor but saw Tobias shine once again. He dropped 24 points, eight rebounds and six assists in 43 minutes. His timely buckets throughout the game kept the Nets from running away with the game.

Statistics aside, Harris and Marjanovic each pose matchup nightmares for the Nets. Tobias is the type of player the Nets are missing, a stretch four. A power forward that has the size and can stretch the floor with his shooting. And it has shown as the Nets don’t have a player that can perfectly match up with him. Standing at 6’9”, Brooklyn’s guards are too small for him and everyone else is busy trying to battle the Philly big men in the paint. Which brings us to the giant that is Marjanovic. At 7’3”, 290 pounds, Boban is an absolute load down in the paint. Jarrett Allen has the height somewhat but doesn’t have the strength. Ed Davis and Jared Dudley have the strength but not the height and it shows when Boban can grab a rebound or shoot over them down low without even having to jump.

In the series, Tobias Harris is averaging 26.5 points, 4.5 assists, and 12 rebounds. He’s also shooting a scorching 50% from three-point range and 54% as a whole from the field. Boban has Philly’s best bench producer with 11.8 points and six rebounds while shooting almost 60% from the field. He’s also been very reliable with his free throws as he is shooting it at about 81%. A surprising aspect of Boban’s game this series has been his mid-range game. The Nets keep giving him that 15-foot shot and he keeps knocking it down. With all the focus going to stopping Embiid, Simmons, and Butler, the dynamic duo of Bobi & Tobi has been a constant thorn in the Nets side all series.

It’s imperative that the Nets slow down Harris on the offensive end and limit how many open looks he gets. Trapping off the pick and roll or running him off the three-point line are just two ways hinder his play. As for Marjanovic, it’s simple. The Nets have to be as physical as they were in game 1 and make a stronger commitment to gang rebounding and boxing him out.