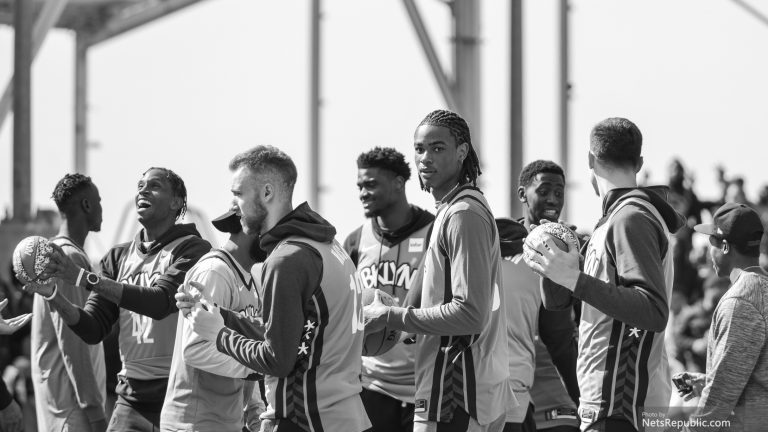 Taking a look at the Brooklyn Nets’ Remaining Schedule

With a regular season to deal with, here’s what the Brooklyn Nets’ potential Orlando slate looks like as a possible NBA resumption approaches.

The Brooklyn Nets are going to Disney World, but they’ll have some work to do if they want to earn the championship that often accompanies the trip.

Brooklyn will be reporting to Orlando on a date to be determined as the NBA prepares to resume and, hopefully, complete its 2019-20 season. They’ll do so with a 22-team format that will see the abbreviated completion of the regular season, with teams situated in an eight-game shootout to determine seeding for the playoff tournament.

The Nets could be a precarious situation. Current plans of resumption call for a potential play-in tournament for the eighth and final playoff seed in conferences in case of any ties. Such a round would be played if any potential pursuers finished within four games of the eight seed. While Brooklyn doesn’t have to worry about the added postseason capital from the Western Conference (which will see five “extra” contenders), their remaining slate isn’t easy. A championship mindset will be vital from the get-go to ensure they can at least play for the Larry O’Brien Trophy.

How can the Nets avoid it? NR takes a look at the teams they’ll face over the fateful eight….

One of the last bits of NBA goodness bestowed to us before the shutdown was Caris LeVert’s 51-point takeover at TD Garden, helping the Nets erase a 17-point fourth quarter deficit in a 129-120 win on March 3. The teams previously split a home-and-home in November with each of them successfully protecting their home court. Top-seed honors are out of the question for the Celtics, but the second slot (three games behind Toronto) is still in play.

The Nets have yet to face a Clippers team that is currently a game-and-a-half up on Denver for the second seed in the Western Conference. Brooklyn hasn’t won a showdown with Los Angeles’ red team since November 2016. This will be Kawhi Leonard’s first showdown against the Nets in a Clipper uniform, having averaged 27 points in four divisional matchups during his title run with Toronto last season (the Nets were 1-3 against Leonard and the Raptors).

Brooklyn must bring a must-win mindset into every Disney-based game, but this against the relative hosts of the proceedings might be the biggest of all. Orlando was well on its way to its first consecutive playoff clinches since the Dwight Howard days, but now their focus becomes avoiding the potential play-in tournament with Washington (currently 5.5 games on their divisional foes from DC). The Magic had won eight of their last dozen prior to the shutdown, which included a narrow 115-113 thriller at Barclays Center on February 24. Brooklyn led by as many as 19, but a double-double from Aaron Gordon (27 points, 10 rebounds) rebooted the Magic from there on out.

The last matchup between the Nets and Trail Blazers came on November 8 B.C….Before Carmelo. 34 bench points from Spencer Dinwiddie helped Brooklyn earn a 119-115 win at Moda Center, eleven days before they brought in Carmelo Anthony on a one-year, non-guaranteed deal. That evening in Oregon also featured a whopping 60 points from Damian Lillard, who has stated he won’t play if the Blazers are out of contention. Time will tell if it comes to that point.

Few envisioned the Kings (owners of the NBA’s longest playoff drought at 14 years) playing into the summer, but such are our current times. They’re currently 3.5 games behind Memphis for the final Western playoff spot, rendering every Disney visit a must-win. Brooklyn won the first meeting between the teams on November 22, courtesy of 22 from Joe Harris on 8-of-11 shooting.

Washington is the only Orlando invitee outside of the East’s current top eight. They’re 5.5 games behind the eighth-place Magic and six games behind the seventh-place Nets. If the Wizards make a miracle run to the postseason, it’s extremely likely Bradley Beal will be involved. He averaged 36.2 points per game in February, the last full month before the shutdown. That month featured two wins over the Nets, including a 113-107 triumph on February 1 that came in spite of 54 points from Kyrie Irving.