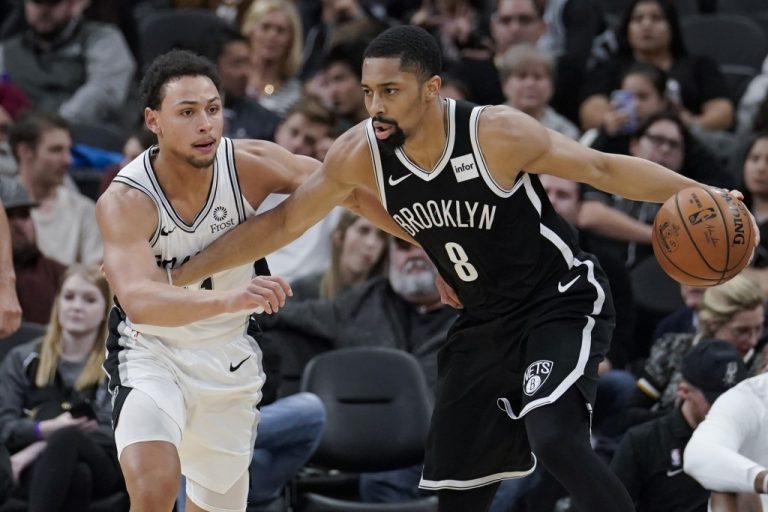 Spencer Dinwiddie has an argument for the most ill-timed injury in college basketball history. After an unheralded high school career, Dinwiddie had proven his worth. He steadily improved over each of his three years at Colorado. Dinwiddie was projected as a first-round pick early on in his junior year. He might even have found his way into the lottery. Then, in the 17th game of the 2013-14 season, Dinwiddie tore his left ACL.

He declared for the draft anyway, confident in his ability to heal and his ability to play at an NBA level. On draft night Dinwiddie tumbled all the way to the Detroit Pistons, who took him with the 38th pick. He played sparingly for them over the next two seasons, and the Pistons traded him to the Bulls for Cameron Bairstow after nailing Spencer to the bench in Year Two. The Bulls trusted him even less, cutting him twice before assigning him to the Windy City Bulls. He excelled there in nine games before the Nets signed him on December 8th, 2016, and the rest is history.

Dinwiddie has improved his scoring in each season in Brooklyn, from 7.3 points per game his first season to 21.0 points per game this year along with 6.4 assists and 3.3 rebounds per game. He has always excelled as an efficient point guard, especially in pick and roll plays. Dinwiddie averaged 6.6 assists against just 1.6 turnovers per game in the 2017-18 season as a full-time starting point guard.

This season, he has continued to show his growth on offense, filling in as the team’s primary scorer with Kyrie Irving and Caris LeVert missing time. Dinwiddie has started intermittently since then, but he has proven himself as an elite player while just missing the cut for the All-Star game. While his role will probably be different once again next season, Dinwiddie will be a key part of the playoff push as Brooklyn prepares for the return of Kevin Durant and potential title contention next year.

While Spencer Dinwiddie has increased his scoring average in each of his seasons in Brooklyn, his raw scoring numbers don’t tell the whole story. Dinwiddie isn’t just scoring more points–he’s taking more difficult shots as well. His shot diet from this season isn’t likely to repeat itself with Kyrie Irving and Kevin Durant healthy. Still, it does show just how much Dinwiddie has diversified his offensive game.

In the 2017-18 season, Dinwiddie was more of a pure point guard. His scoring burden was not all that dramatic, which is borne out in the numbers. He took 42.2% of his shots as pull-ups, 24.2% as catch-and-shoot looks, and just 32.6% of his shots within ten feet of the basket per NBA.com. Dinwiddie could knock down shots created by others pretty well, making 36.8% of his catch-and-shoot triples. However, he struggled when forced to create for himself, making just 29.3% of his pull-up threes.

Dinwiddie started to change his shot selection last season and has dramatically improved his driving game. He has been far better at using his dribble to get all the way to the rim instead of stopping short and looking for kickout passes. It’s had a dramatic effect on his game–Dinwiddie is taking more than half of his shots this season (51.1% to be exact) from with ten feet of the basket. He doesn’t have the same top-flight speed as elite point guards, but he makes up for it with decisiveness and a crisp handle:

Most of the increase in shots around the rim comes from a dramatic reduction in Dinwiddie’s catch-and-shoot opportunities. However, his increased ability to score around the basket isn’t just helpful on its own merits; Dinwiddie like most players, shoots better near the basket. He makes 51.6% of his shots from ten feet and in per NBA.com. While that mark won’t lead the league, it’s still a benefit to his scoring efficiency.

The main knock on Spencer Dinwiddie’s offense this season has been his shooting. He is shooting 42% overall and 31.6% from deep through Saturday’s game, both down from last season’s 44.2% and 33.5% marks. Dinwiddie doesn’t shy away from long-range bombs, as he’s averaging more than six per game. Still, his poor numbers on the surface don’t tell the full story.

His shot diet has evolved to match that of a primary scorer, but it’s also impacted his efficiency. Dinwiddie is still making 29.3% of his pull-up jump shots from beyond the arc. He’s taking slightly fewer of them than he did in 2017-18, down to 35.6% of his shots. The main issue is that his catch-and-shoot rate has dwindled dramatically–from 24.2% of his looks two years ago to just 12.5% of his shots this year.

Catch-and-shoot jumpers have nearly disappeared from Dinwiddie’s game. However, his accuracy on those shots seems far more in line with what we might expect–Dinwiddie has made 38.2% of his catch-and-shoot triples this season. He has a history of being an above-average shooter from deep when he isn’t pulling up off the bounce, but he’s had fewer chances to do that this season with so many injuries to Brooklyn’s other offensive creators.

While Dinwiddie has not had many opportunities to take catch-and-shoot looks, he can knock them down when given those chances. Dinwiddie has taken fewer spot-up opportunities in each of the last two seasons. However, that trend is likely to change going forward.

The remainder of the 2019-20 season will be an interesting test for Spencer Dinwiddie and the Brooklyn Nets. With Kyrie Irving continuing to miss time with various nebulous injury issues, Dinwiddie and Caris LeVert will be primarily responsible for keeping the squad in playoff position as lead playmakers on offense.

While the Nets are almost certainly playoff-bound, they are also well behind the teams at the top of the conference. The team could get lucky, but they seem likely to miss the playoffs this season.

The real questions begin next year, following Kevin Durant’s return to the floor. Dinwiddie’s offensive role shrinks when Kyrie is healthy, but it could change even more dramatically with Durant on the floor. Spencer should expect to see his shot profile change yet again; more catch-and-shoot looks should improve his percentage from long-range, even if he is less involved in the offense overall.

Spencer Dinwiddie has improved in every season that he’s played in Brooklyn, and next season will be his most important one yet. He might not be able to boost his scoring average again. However, Dinwiddie’s versatile scoring game, passing, size, and savvy will make him a key contributor. If he can build on his strengths as the Nets focus on their stars, Spencer Dinwiddie might be the deciding factor in just how far this Brooklyn Nets team can go. He’ll find a way to mold his game to the role the team needs and will excel in it–just as he always has in Brooklyn.