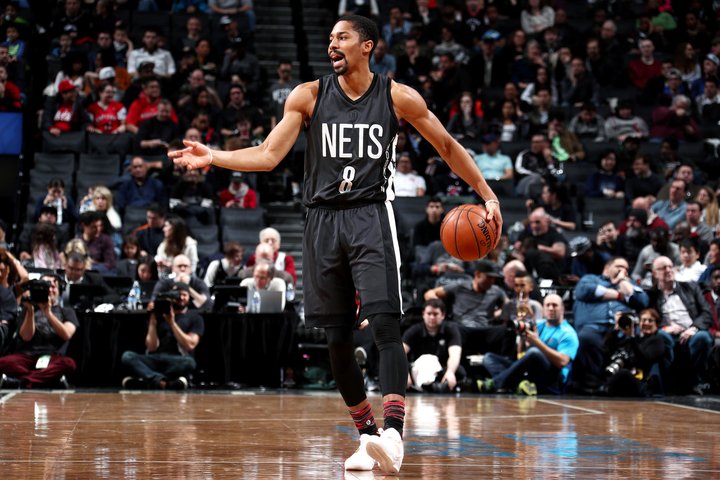 BROOKLYN, NY - FEBRUARY 5: Spencer Dinwiddie #8 of the Brooklyn Nets brings the ball up court during the game against the Toronto Raptors on February 5, 2017 at Barclays Center in Brooklyn, New York. NOTE TO USER: User expressly acknowledges and agrees that, by downloading and or using this Photograph, user is consenting to the terms and conditions of the Getty Images License Agreement. Mandatory Copyright Notice: Copyright 2017 NBAE (Photo by Nathaniel S. Butler/NBAE via Getty Images)
Home
News
Noah Shatzer

Spencer Dinwiddie was selected as a participant in the 2018 NBA All-Star Taco Bell Skill’s Challenge.

Spencer Dinwiddie is averaging 13.4 points and 6.4 assists per game with Brooklyn this season. He is the fourth Nets guard to be selected to participate in the skills challenge. Before Dinwiddie, Jason Kidd partook in the challenge in 2003 and 2008, along with Devin Harris in 2009, and Deron Williams in 2012. Kidd was the victor of the Skills Challenge in 2003, the first year the event was featured at All-Star Weekend.

What is the Taco Bell Skills Challenge?:

Spencer Dinwiddie will be facing off against three quality guards in his bracket including LA Clippers gunner Lou Williams. Denver Nuggets rising start Jamal Murray, and the Utah Jazz’s rookie sensation Donovan Mitchell are the other guard participants. The Mayor’s first round opponent has yet to be determined.

On the other side of the bracket, four talented big men will compete among each other for a chance to take on the winning guard in the final round. Representing the big men will be three of the East’s All-Stars, including the Boston Celtics’ Al Horford, the Philadelphia 76ers’  Joel Embiid, and the New York Knicks’ Kristaps Porzingis. Along with the three all-stars, Chicago Bulls’ rookie Lauri Markkanen will also be competing.

You can watch the final round of last year’s Skills Challenge here:

When and Where to Watch:

The 2018 Taco Bell Skills Challenge will take place on Saturday, Friday 17th and will air on TNT at 8 p.m. ET. Along with the Skills Challenge, the JBL Three-Point Contest and Verizon Slam Dunk will be taking place on All-Star Saturday night.