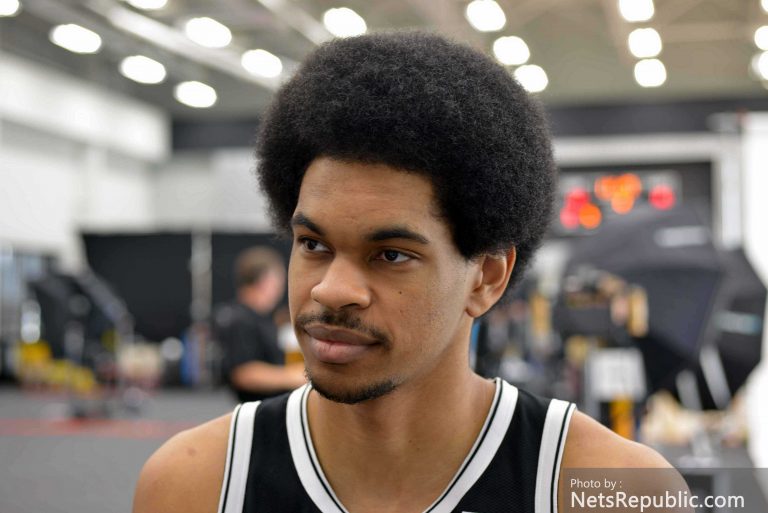 A few years ago when I was writing for a now-defunct site, I did a series called “The Scientific Method,” which was me — a person who has never been great at analytics and math and all that and was even worse then — would pose a question and then try to use all the available data I had to answer that question.

The Brooklyn Nets are by far the lowest post up usage team in the NBA this season. There are teams who run more post up plays per game than Brooklyn has run all season, which in theory sounds like a pretty wild concept.

So, here’s the question that I want to test: Should they be posting up more, or is this current style of play that eschews the post up working out fine?

And here’s my working hypothesis before I start my research: Probably not, because post ups are supposed to be a pretty inefficient playtype, right?

Let’s start with the basics here: What is a post up?

Basically, it’s a play where the team gets the ball to an offensive player in the paint who has his back to the basket. Think of basically all of the historically good big men, and you’re likely going to end up thinking about their post moves. Hakeem’s dream shake. Kareem’s hook shot. Duncan’s, umm, Duncan-ness.

For a long, long time, big men posted up. It was just what big men did. But as analytics became more of a thing, we started to realize that post up plays weren’t quite as efficient as we thought they were.

It’s an older piece, but Grantland’s Brett Koremenos wrote in 2013 about post up efficiency and found that most post ups result in shots from outside of the rim area and from “locations [that] produce a worse points-per-possession outcome than the three key scoring areas on the floor: at the rim, behind the 3-point line, and at the free throw line.”

Looking at this year, the team that use the most post ups, the 76ers, score 0.901 points per possession in post ups. That’s worse than they score off spot ups, cuts, transition plays, and pick-and-roll roll man plays.

Koremenos did find that not all post plays are inefficient, though. One way teams can take advantage of the post is by passing out of it: let the defense collapse in when the ball moves towards the basket, then pass it out to an open player on the perimeter.

Overall, though, yeah–the post up appears to be a less efficient way to score buckets than a lot of other playtypes are.

What kinds of plays do the Nets run?

If you watched the Nets last year — and I assume you did if you’re reading this Nets site — then you definitely heard the broadcasters talk about how much the team ran the D’Angelo Russell and Jarrett Allen pick-and-roll, which I believe was the second most run play in the NBA last year per my memory of what the broadcasters said.

This year, Synergy has pick-and-rolls — either finished by the ball handler or the roll man — accounting for 28.6% of Brooklyn’s offensive possessions, so again the team is emphasizing these kinds of plays.

The Nets rank fifth in points per possession on plays with the roll man ending the possession, though they’ve struggled more when the ball-handler ends it, scoring at just the 17th-best mark.

That number should improve once Kyrie Irving returns. It’s a #SmallSampleSize, but Irving is scoring in the 86th percentile as a pick-and-roll ball handler this season, and his prowess in those situations is a big reason why DeAndre Jordan is on this team, as he’s a big man who’s best when being used as a rim runner and not as a traditional post guy.

Here’s the main question we’re trying to answer here: Should the Nets, who NBA.com says have posted up 16 times all year, do more posting up?

It’s an inefficient playtype when it comes to scoring the basketball, but could getting Jarrett Allen the ball down there more and letting him pass it out create more offensive opportunities for Brooklyn’s spot up shooters?

Probably. Cranjis McBasketball wrote this in a piece over Synergy playtypes for Nylon Calculus:

he best use of post-ups is to pass the ball there, run off-ball screens and/or split cuts, try to get shots for the cutters and off-screen shooters there, and after those options don’t work, then attacking in the post becomes Plan B.

Looking through video, it’s hard to find Allen getting assists in post up scenarios, but he does do a good job making passes out of the post when he gets into the post in non-post up scenarios, and his ability to make those smart passes makes me wonder if he’d have even more passing lanes open up if the Nets ran a couple of actual post plays for him each game.

But then, those plays might not work if there’s NO threat from Allen to score in those situations, right? And that pulls him away from the perimeter and negates his ability to be used as a screener.

It’s tough. Variety is the spice of life and all of that, but sometimes variety can be too much. You’ve overspiced food before and couldn’t taste the meat anymore, right? Running more post plays could be that extra salt that ruins a good steak.

Maybe when Caris LeVert is back and is in the game as the primary ball-handler, you can run these kinds of plays. LeVert’s struggled as the pick-and-roll ball handler this year, so if he’s initiating the offense, it could be a good time to see how you can expand things.

But in terms of running post up plays with the intention of scoring in the post? Nah. I’m good with how the offense is currently doing things.