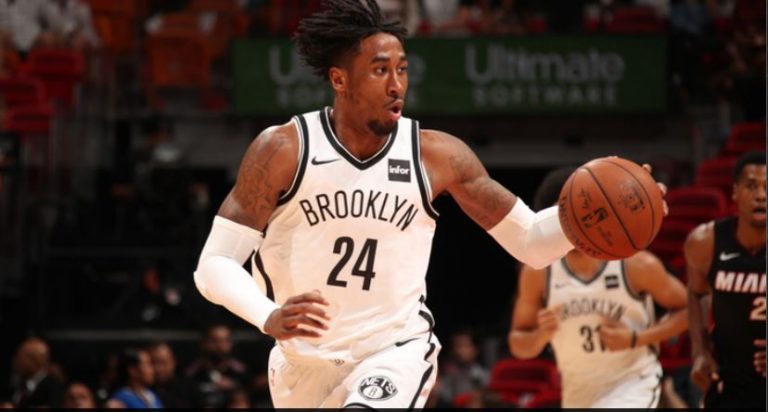 At first glance, Rondae Hollis-Jefferson’s value isn’t obvious. In a league dominated by three-point shooting, Hollis-Jefferson is shooting 24 percent from behind the arc while taking a career low 7.3 percent of his shots from that range; instead choosing to thrive in notoriously inefficient areas like the mid-range and low post.

He can’t space the floor and he isn’t a particularly natural scorer, but his improvement this year has been astronomical and he is finally capitalizing on the potential which made him so intriguing coming out of the University of Arizona.

Here’s how he is quickly becoming one of the best kept offensive secrets in the league.

Although Rondae Hollis-Jefferson is a mere 6’7” feet tall and 220 lbs, the Nets frequently use RHJ like a big man. They run him as the de facto big man in the pick and roll, post him up against smaller players, and use him as a clean-up man around the basket.

Because of his lackluster three-point shooting, head coach Kenny Atinkinson has had to find ways to use RHJ off the ball. To his credit, he’s done an exceptional job.

This year, the swingman is scoring a staggering 1.29 points per possession (PPP) diving towards the basket in the pick-and-roll (84.9 percentile), while using the 3rd most possessions of that type on the team. Furthermore, he’s scoring .99 PPP in the post (77.8 percentile). And, while he may not be a traditional scorer down low, he can hit awkward shots and is finding creative ways to score inside.

In the post, he uses a variety of different moves to get buckets. From a turnaround fadeaway jumper to straight-up bully-ball. He may never develop as a shooter, but his post game should be enough to keep defenses honest. Moreover it should give him the tools to score in the half court.

What has made the former Wildcat so dangerous this year, is his deft playmaking and his knack for blowing by slower defenders to get to the basket. Even though he isn’t afforded the space of elite shooters, he finds small ways to get past defenders consistently.

From filthy spin moves to creative footwork to his ability to get shots off at awkward angles, he’s finding ways to adapt to the way defenses cover him, and harness his natural athleticism.

Becuase he can find a way to get by most defenders, he’s become an incredibly unpredictable scorer with the ball in his hands.

Perhaps the most exciting part for Nets fans, is Rondae Hollis-Jefferson newfound ability to drill pull-up jumpers from the three point arc. This has made him nearly impossible to stop within 18 feet. Watch the play below and how he hits a tough fadeaway jumper with almost no room to operate.

These kinds of plays rarely happened last year. But with more touches and freedom in the offense, he’s thriving and there are opportunities moving forward.

Rondae Hollis-Jefferson is similar to a multitude of young tweeners. He’s found a niche beating big men off the dribble and dominating smaller guards in the post.

In previous years he spent the majority of his time at the 4-spot. This season however, the former Wildcat is spending a career-high 56 percent of his time at small forward,. In this role he exploits and creates mismatches on a nightly basis.

The video below demonstrates his prowess in this area. Witness how he consistently blows by slower players and collapses the defense to open up shots for both himself and his teammates.

Again, he’s using his creative footwork and ball-handling to make-up for whatever disadvantages he may have as a shooter. And, now he is readily able to exploit whatever holes there may be in defenses regardless of size.

Rondae Hollis-Jefferson newfound ability to create his own shots for scoring opportunities is also benefiting his teammates. And although his assist numbers don’t really jump off the page (3.1 assists per 36 minutes to  2.2 turnovers), he’s improving radically as a playmaker.

In earlier years Rondae Hollis-Jefferson was out of control breaking down the defense and getting into the paint. Yet, this year he’s displaying a newfound patience in the paint that makes him incredibly dangerous.

Another sign of growth is his patience and ability to read the play. Specifically, RHJ will wait just long enough to hit the open man and look for the better shot. Or he can kick it back out to a shooter and keep the offense moving.

Rondae Hollis-Jefferson is certainly not a bona fide point forward yet. Still, he’s showing enough flashes of vision on the move. More importantly, the willingness to make the simple pass to buy into his potential as a playmaker