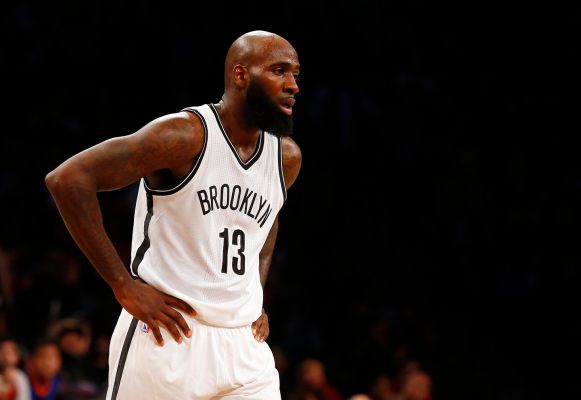 Quincy Acy Returns For Another Round in Brooklyn

There are not many people on Earth who could argue they had a better day than Quincy Acy on July 17, 2017:

So @QuincyAcy signs vets minimum w/ #Nets and gets married in the same day. Not many nicer people in the biz.

Acy has been a favorite among both fans and teammates at nearly every stop of his journey in professional basketball. He garnered some media attention last year for his generous and thoughtful gesture to his former D-League teammates after signing with the Nets. The Mavericks were reportedly heartbroken about cutting Acy.

Thankfully for Nets fans, Acy managed to land on his feet pretty quickly. He was impressive down the stretch run of the 2016-17 season, and his high-effort level and rapidly improving 3-point shot make him a great signing for Brooklyn’s 2017-18 squad. He could easily be a solid role player again next season and a good value for his relatively cheap $1.7 million deal.

Some fans were shocked with Acy’s shooting from long range in Brooklyn. After all, he did not crack 100 career attempts from deep until three years into his career–during his 2014-15 stint with the New York Knicks. Acy scored most of his points on dunks and offensive putbacks before 2015.

However, Kings fans were not shocked by Acy’s development from beyond the arc. His long-range shooting started to gain steam with his 18-of-60 performance from deep in 2014-15. That shooting from distance took another step forward in Sacramento.

Acy only attempted 49 triples in 2015-16, but despite the low attempt rate, he was solid from deep. He made 38.8 percent of his shots from three-point range that season in Sacramento.

The five-year player was particularly accurate from the left corner, as he converted seven of his 12 triples from that zone. His ability to spot up around more ball-dominant players such as DeMarcus Cousins and Rajon Rondo allowed him to get easy looks through smart cuts and at least some potency from beyond the arc.

Acy took that 3-point shooting success to another level in Brooklyn. Despite only playing in 32 games for the Nets (along with a brief six-game stint in Dallas to accompany his D-League tenure), Acy attempted 83 of his 216 career 3-point attempts during his time in Brooklyn. He knocked those shots down at a remarkable 43.4 percent clip.

Given that Acy has played five years in the NBA already, his increase in 3-point shooting is nearly unprecedented. If not for Brook Lopez’s even more outlandish jump in 3-point attempts and makes, Acy’s performance would seem even more ridiculous.

As my colleague Nick LeTourneau showed a few weeks ago, Acy was able to score from deep in a variety of different ways:

QUINCY ACY 3PM MASTER THREAD:
Acy has tons of little moves like this to create space. Jabstep made Price drop to paint, opening up Acy for 3 pic.twitter.com/vlD6O1rP9J

Acy did start to incorporate 3 three-point shot during his year in Sacramento after an up-and-down year in New York, but he took that shooting to new heights in Brooklyn. He made just 10 of 31–32.3 percent–of his above-the-breaks triples in 2015-16, per NBA.com. In Brooklyn? Acy canned 28 of his 64 looks from that range, a far more impressive 43.8 percent from that range. His 3-point shooting from the power forward position has already proven to be an excellent fit for Kenny Atkinson’s offense, and Acy will get to show that often next season.

Aberrations near the rim

Although Acy showed incredible promise from beyond the arc last season, his scoring near the basket was not up to par. Acy made just 24 of his 49 baskets in the restricted area last season, per NBA.com.

While that inaccuracy near the basket is troubling for Acy, it certainly is an aberration. Despite lacking a 3-point shot until two years ago, he managed to carve out an NBA career due to his consistently high motor. He also certainly has some athletic gifts:

Quincy Acy might have struggled near the basket in Brooklyn. While some might want to blame that on his ankle issues, Acy only played 59 games in Sacramento the year before, and was still able to put together the highlight reel above. If he can bounce back to normal near the basket while retaining his newfound 3-point marksmanship, he will be a dangerous role player for years to come.

Quincy Acy is a beloved teammate at every stop, no matter how long he stays there. Acy only played six games in Dallas before the Mavericks cut him. However, Acy clearly made an impression during that brief stay. Mark Cuban called the move “horrible,” per the Dallas Star-Telegram. He was clearly upset with having to let Acy go:

“Staff was heartbroken, I was heartbroken. We just didn’t want to give up on any of our youngs and Quincy was just on a one-year deal. Purely a numbers game, and it was brutal.”

Mavericks coach Rick Carlisle was not as emotionally effusive as Cuban. However, Carlisle’s words may be even more indicative of Acy’s character:

“It was very difficult to let Acy go because he’s a warrior and he’s exactly the kind of guy that we want in our culture. He’s a guy who is a good NBA player and who is still young and who is still getting better.”

Acy somehow managed to one-up even the high praise of Carlisle and Cuban last season. His gesture to his former D-League teammates was one of the more touching moments last season. That incident may have garnered a lot of media attention, but it is simply an extension of Acy’s thoughtfulness and kindness.

However, Sean Marks and Kenny Atkinson did not just bring Acy into the fold for his impeccable character. They brought him in for his relentless motor and, now, his vastly improved 3-point shot. Quincy Acy will have plenty of opportunities next season as a potential combo big man with a stretchy game. The Brooklyn Nets will need his skill-set, and Acy has already shown just how much he can shine when given a chance to succeed.