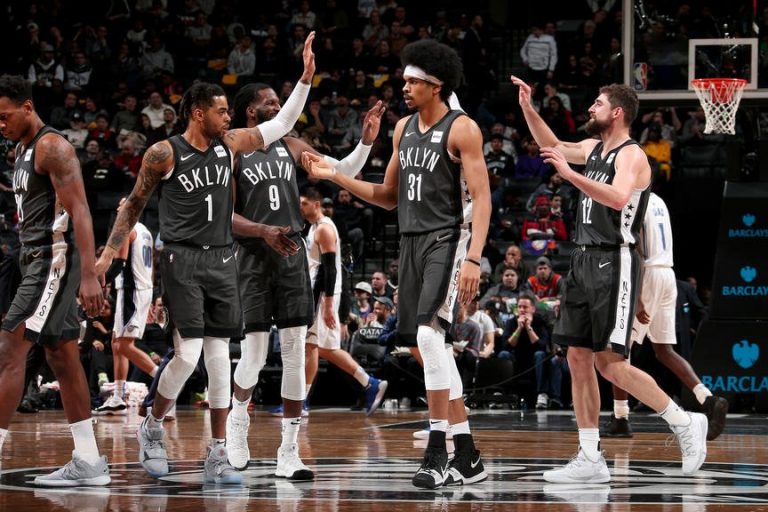 BROOKLYN, NY - JANUARY 23: The Brooklyn Nets react to a play during the game against the Orlando Magic on January 23, 2019 at Barclays Center in Brooklyn, New York. NOTE TO USER: User expressly acknowledges and agrees that, by downloading and or using this Photograph, user is consenting to the terms and conditions of the Getty Images License Agreement. Mandatory Copyright Notice: Copyright 2019 NBAE (Photo by Ned Dishman/NBAE via Getty Images)
Home
Brooklyn Nets
Justin Carter

We’ve got just two games this week before the All-Star Break is upon us, and the quality of those games is pretty varied — a meeting with Toronto, one of the NBA’s best teams, and Cleveland, one of the NBA’s worst.

For our Raptors discussion, we have Joshua Howe from Raptors Republic, and for the Cavaliers we’ve got Chris Manning from Fear The Sword.

How do you anticipate Marc Gasol fitting into things for the Raptors?

With more difficulty than most think. The Raptors run a pick-and-roll-heavy offence, and Jonas Valanciunas was a perfect fit that way. He’s a great rebounder, an excellent roll man, a wonderful screen-setter, and was having the best defensive season of his career. To have the trade be considered a success (Toronto also gave up Delon Wright, C.J. Miles, and a 2024 second-rounder), Gasol will have to provide some of the things JV did, and more. The problem with Gasol’s ability to raise the Raptors’ ceiling is not necessarily that he can’t do it, it’s that he needs to be put in proper position to maximize his talents, and the way the Raptors have played this season (and for a few seasons now) doesn’t do that.

Gasol is at his best as an offensive hub, playing at the high post and looking for cutters and other off-ball actions. This is not something the Raptors have ever had before and, ideally, could work wonderfully (par example, it could take Lowry off-ball and allow him more opportunity to spot-up, removing some pressure). But it’s not that simple—things never are. The Raptors have only 25 remaining games to figure out how to get to such an idyllic point, and they’re already mired in a season-long slog of injuries that has set back chemistry development significantly. Adding to that, Nick Nurse has kept the centre position fluid all year, and if he continues to do so and Gasol is therefore simply placed into the role Valanciunas was playing, he won’t be used the way that potentially gives the Raptors a revamped and multi-faceted offence (and also probably damages the defence).

There’s a lot to parse with the Gasol deal, but it ultimately boils down to this: Gasol is a different player than Valanciunas, and so he needs to be used differently to maximize his abilities and the Raptors’ chances of making The Finals. Will Toronto be able to figure out how to best do that with such limited time remaining in the season? Possibly, but one should be forgiven if they remain a tad bit skeptical.

After a busy trade deadline at the top of the East, how do you rank the top four teams? Why?

I think I have to go Milwaukee first, followed very closely by Toronto, then Boston and Philadelphia.

The Bucks have had Toronto’s number to this point and have blown their preseason expectations out of the water. Adding Nikola Mirotic can’t be anything but a victory for them, because any time you can provide Giannis Antetokounmpo with another shooter (a really good one, at that), you do it. He should be a seamless fit for that team, and he’s the sort of player who can win a playoff game or two if he heats up. The Bucks are having the Cinderella season that the Raptors did last year, but the East is wide-open this time, and they’ve got a legitimate superstar in Giannis to lead them.
The Raptors are still extremely dangerous, despite all that’s plagued them this season. They’ve owned the Sixers in all of their matchups (Ben Simmons has nightmares of being guarded by Kawhi Leonard), and while things have been back-and-forth against the Celtics, the disfunction on Boston’s side of things keeps them a notch below Toronto. There’s still plenty for the Raptors to work on this season to get to where they want to be (see the summarization of the Gasol concerns above), but they’ve managed to maintain a spot near the top of the conference regardless (a spot they may well take back, since they’ve played two more games than Milwaukee and have a cake schedule to close the year). They are no longer the clear favourite to win the East, but when push comes to shove it’s still difficult to bet against them.

It’s tough to decide how to feel about Boston. They’ve been so up and down this season, and just when you think they’re getting back to form after ripping off a series of wins, they take a loss they shouldn’t have (e.g. recently against the Lakers) or blow a big lead that stirs the pot in their already simmering locker room (e.g. Saturday’s loss against the Magic). They remain a dangerous team, though they didn’t make any plays at the deadline to improve the roster in order to keep their assets for a potential Anthony Davis deal, and so they’re a known quantity in terms of personnel.

Even so, their otherwise enigmatic status is anxiety-inducing if you’re a fan of one of the other three teams.

Philly is ranked last here due in part to the fact that, unlike Boston, they had such large roster turnover at the deadline. It’s going to take some time to see how all the parts fit together. Short-term, the fit would seem to be pretty good. Tobias Harris will provide spacing and can be a legitimate creator for lineups that need it. The Sixers also did a nice job trying to shore up their shallow bench, and so now their success relies on chemistry and how quickly Brett Brown is able to maximize his newfound pieces. Out of the Eastern powers, the Sixers are the team that’s had the least success against the others, and since they’re likely still going to be figuring things out come the playoffs, they’ll hold the fourth spot until they’ve proven they deserve higher consideration.

Who wins — Raptors or Nets?

The last time I did this, I’m pretty sure I said the Raptors would win, and then they lost. So, I suppose I should try a method of reverse psychology and say that the Raptors will lose? Either way, it should be a fun game. It’s thrilling that Caris LeVert is back and in uniform, and the Nets (currently sixth in the East) will be a good test for a Raptors squad still very much in the process of figuring themselves out. Everyone’s eyes will be on Gasol as Nurse continues to integrate him into the rotation, and a bout of Big Spain against Jarrett Allen could be highly entertaining.

Kevin Love is (kinda) back. What do you expect to see from him the rest of the year in terms of minutes and production?

It’ll be interesting to see how the Cavs approach this and we don’t quite know that yet. In the 21ish minutes he’s played so far, they’ve looked a lot better with him on the floor. The ball moves better, plays function smoother and everyone else’s job is easier. Love, without question, raises the floor of the Cavs’ season. But that also works against their ideal scenario of getting a top-three pick and getting a stud young player to pair with Love (assuming he isn’t flipped), Collin Sexton, Cedi Osman and other pieces next year. And let’s say Love makes them good enough to be the fourth-worst team instead of the third, is it that a good outcome for the franchise?

I think he’ll play a good amount, but maybe sit back-to-backs. They won’t be able to have him not play unless he gets hurt again. Ditto for Tristan Thompson, who has been awesome this year when healthy. But we’ll see how much the Cavs actually want to win based on much Love does actually play.

Marquese Chriss seems to have already cracked the rotation. Any hopes that the Cavs get anything out of the former lottery pick?

I don’t think there’s a huge chance, but you never know. He’s 21 years old, athletic and has been okay in his first few games with the Cavs despite make several questionable plays in each outing. I think, though, playing him makes sense for the Cavs because they can’t be picky with talent. They don’t have a lot of it and while his fit on the roster is odd because of the many big Cleveland already has, it’s probably worth it to see if he can make enough of an impression to at least get a summer league invite. It’s the definition of a low-risk with minimal upside signing.

Who wins — Cavaliers or Nets?

The Nets are just a better team and play an organized brand of basketball that the Cavs have issues with. I think Brooklyn wins fairly easily.