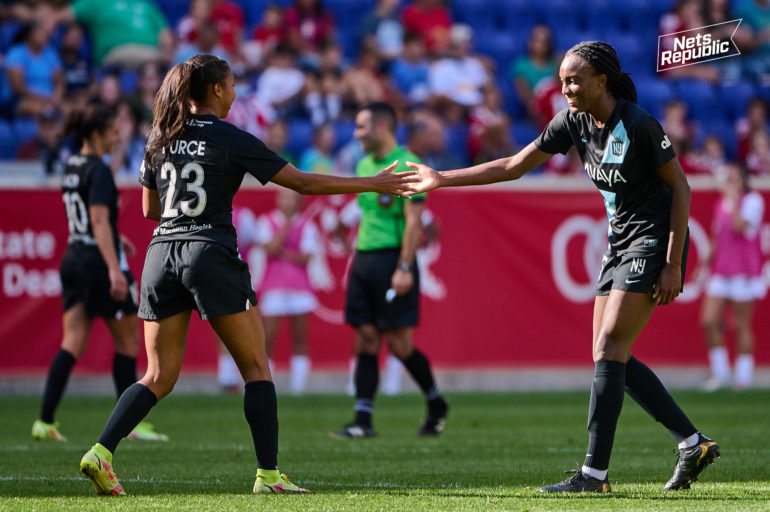 When Gotham FC traveled to Tacoma back in June, they were surely the underdogs. An already strong OL Reign had just imported Eugenie Le Sommer, Dzsenifer Marozsan, and Sarah Bouhaddi — all on loan from Olympique Lyonnais — to join the likes of Megan Rapinoe and Jess Fishlock. Simply put, the Reign was super stacked.

Even so, it was Gotham who put on a dominant performance that day — scoring three goals and keeping a clean sheet. Rather than an NWSL coming-out party for three of Europe’s most decorated footballers, the match instead marked the advent of what is becoming the league’s most potent attacking duo in Margaret Purce and Ifeoma Onumonu.

In the 37th minute, OL Reign center back Alanna Cook mishit a pass inside the midfield circle that ricocheted off Gotham midfielder Jennifer Cudjoe and into the path of Purce, playing off the right wing. Purce quickly one-timed the ball diagonally through the Reign’s center backs, and right in front of the feet of Onumonu, catching her in stride. Onumonu drove to goal, cutting onto her left foot to beat Bouhaddi — who was caught way off her line outside the 18 — and coolly slotted the ball into the back of the net to make it 1-0.

Later, in the second half, Nahomi Kawasumi put a long ball over the top to find Purce, who was making a well-timed run off the left shoulder of her defender. Purce brought the ball down deftly and finished into the right corner past Bouhaddi.

It was the first game this season that Purce and Onumonu linked up for a goal, and remarkably, it was the only time the pair made it onto the scoresheet in the same match. Since then, Purce and Onumonu have become the catalyst of the Gotham attack. The tandem accounted for 17 of Gotham’s 29 regular season goals — Purce finishing with nine goals and Onumonu with eight.

Many of these goals came in clutch moments, ensuring Gotham took away a point or all three in what was the league’s most competitive playoff race in its history. But Sunday will be the biggest test for the Purce/Onumonu strikeforce when they take on the Chicago Red Stars in a quarterfinal clash. Gotham’s best chances of winning, and making a deep run into the playoffs — a stage the club only reached once before in the NWSL’s inaugural season — will depend on the pair’s production and their ability to influence play.

When they’re fit and firing, they look nearly unstoppable.

Purce’s star was already on the rise when she was traded to then-Sky Blue FC ahead of what was to be, and then never was, the 2020 NWSL season. After finding success with the Portland Thorns and breaking through to the U.S. Women’s National Team, fans and media expected Purce to be a big-time player for the club.

Onumonu, traded from the Reign in early 2020, came into the team as a bit of a journeywoman. She’d played for three NWSL clubs in her first three years in the league — showing flashes of quality but was never made the focal point of a team’s attack. Her success at Gotham is an example of a player capitalizing on an opportunity — making herself undroppable on a team with deep attacking options.

The two helped Gotham advance to the 2021 Challenge Cup final, losing on penalties to the Thorns, but really came into their own in the regular season. They’ve shown that the qualities that make them great as individual players — the versatility to play across the front line, the ability to take on players 1-v-1 and create their own opportunities, the quality of their service into the box, the pace to punish defenders on the break, and the consistency in finishing their chances — make them an exceptional attacking partnership.

It’s funny to say, and likely a scary prospect for their opponents, but despite the numbers the two put up this season, it’s a partnership that is still in its infancy.

A quad injury sidelined Purce for six games in the middle of the season — leaving Onumonu to carry the load alone and robbing the two of a chance to build their chemistry. Her absence coincided with Gotham’s worst stretch of the season in which they lost three games and settled for draws in the rest.

Purce’s first game back with the team — a 3-1 thrashing of the Courage at Red Bull Arena on Sept. 25 — saw Purce and Onumonu link up again: in the 36th minute, Carli Lloyd, coming from a deeper position along the right sideline, sprung Onumonu forward with a ball that landed at her feet at the edge of the 18. Onumonu then drove her defender endline before cutting the ball back to Purce, who was making a late run into the box where she then buried the ball near post.

“I missed playing with [Onumonu] so much,” Purce said after the match. “It’s unlike playing with anybody else. We just have a special relationship on the field.”

A few weeks later, after another convincing win over North Carolina, Gotham Coach Scott Parkinson spoke to the pair’s on-field and off-field chemistry, saying Purce and Onumonu share a connection that you see in great sports partnerships.

And that partnership, Parkinson said,  is “nowhere near the peak.”

Unlocking an Even More Dynamic Attack

Gotham enters the playoffs on an eight-game unbeaten run, but they settled for three 1-1 draws to finish the season. To move beyond Chicago — who they beat once and tied twice this year — Gotham will need to find their spark again, and that may very well depend on who Parkinson decides to play with Purce and Onumonu on the front line.

For much of the season, when the three players have all been available, Parkinson, and former Gotham coach Freya Coombe before him, played Onumonu, Lloyd, and Purce as an attacking trio. But Lloyd’s best contributions this season — including sparking the attack that culminated in Purce’s goal against Carolina on Sept. 25 — have come from a deeper position.

Even at age 39, Lloyd still has an engine and remains one of the fittest players on the pitch. But she lacks the speed to keep up with Purce and Onumonu, at times not being able to finish the service the two fire in from the wings in transition. With the attacking options of Paige Monaghan and Évelyne Viens available to Gotham, it seems wasteful to continue to play Lloyd in that central attacking role.

As André Carlisle wrote for All for XI following Gotham’s loss to Portland in the Challenge Cup final back in May, “Growth means recognizing when something doesn’t fit anymore, and Lloyd spearheading Gotham’s attack just doesn’t fit their acquired personnel. With Purce, Monaghan, Viens, and Onumonu, Gotham possess an attack that could hit another gear if not being governed by Lloyd.”

Playing either Viens or Monaghan with Onumonu and Purce on the front line may be the best way to capitalize on the qualities that duo offers in the attack — and would likely result in more chances created for a side that’s lacked a ruthlessness at times this season.

Getting this right could unlock Gotham’s most dynamic attack yet, allow Onumonu and Purce’s partnership to flourish, and just maybe, put them in a position to win a championship.