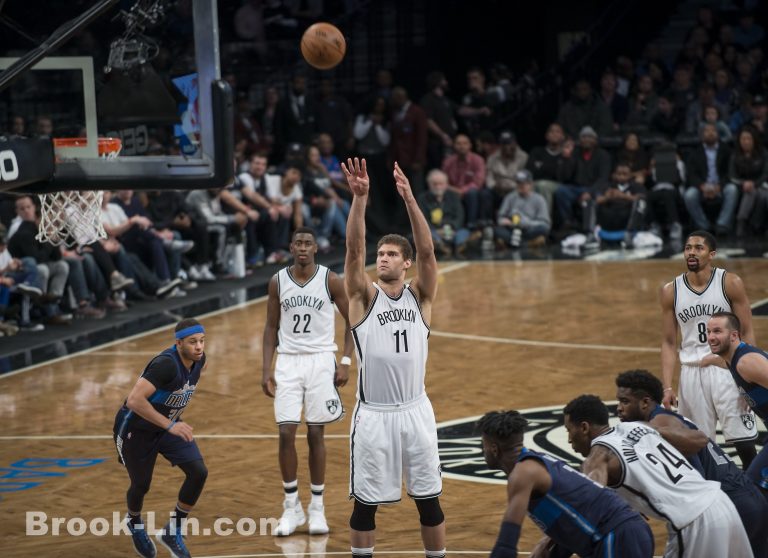 One Fan Wants To Send You To A Game For Free, But There Is A Catch

The Brooklyn Net’s fanbase might be one of the most diverse and eclectic group in the entire league. An interesting melting pot of all types of people, the passionate fanbase has seen a recent influx of new fans since Jeremy Lin‘s signing this summer.

A majority of these fans have been following Lin since his days as a New York Knick during Linsanity, but now that he has found a home in Brooklyn so has his large following. For the most part, his fans and the fanbases of teams he plays for have gotten along but after the now infamous timeout incident during last Friday’s Nets/Celtics game some tensions have arisen between traditional Nets fans and Lin’s following.

To avoid further animosity and foster a good relationship, one fan has decided to take matters into his own hands. @CheesyChee3 (otherwise known as Chee The Wookie in honor of Brook Lopez’s buzzer beater) has purchased two tickets for the upcoming April 2nd matchup between Brooklyn and Atlanta. If you want to enjoy these seats in Section 6, Row 10 all you need to do to do is one simple thing.

If you are a Nets fan, reach out to a Lin supporter or vice versa and find some common ground. Then get in contact with Chee here on Twitter and prove that you two are the pair that deserve to go.

Chee, who has been an avid sports fan that has supported Lin for some time now, didn’t really follow Brooklyn basketball until Lin decided to sign back in July. He was familiar with guys like Brook Lopez and Bojan Bogdanovic, but also remembers the Deron Williams days. Much like most Nets fans, he wasn’t too fond of him except for his run with the 2008 Olympic Men’s Basketball team.

Since tuning into the Nets this season, Chee has become a fan of Lopez and all of his quirks. He likes how goofy he is, his affinity for comics, and how he wears Stanford gear when the team practiced at UC Berkley. Chee also has enjoyed watching the growth of Caris LeVert, Sean Kilpatrick, and Spencer Dinwiddie while Lin was sidelined with numerous hamstring injuries.

He appreciates how the team has embraced Lin as one of their leaders and plays in a unified and selfless way when on the court. They play hard day in and day out, regardless of their record. That is something that does not get discussed enough. Chee firmly believes Lin made the right choice by signing with Brooklyn in the offseason.

“After Kenny took the job (before Lin signed) I read quite a bit about him and listened to a few of his interviews” Chee said. “I really like him, especially his humble beginning, honesty, and underdog mentality. One interesting thing about him was that he never actually started out with becoming a NBA coach as his goal, even when he was working as development/assistant coach in the NBA. He just wanted to do as good of a job that he could for any role that came his way. Eventually one thing lead to another and he is here.”

“I also like Sean Marks even though I know less about him that I know about Kenny” Chee said.  “I like how Sean emphasize a lot on culture, values, team and family. There is also a Duke connection in Nets. I used to follow Trajan Langdon (who is assistant general manager of Nets) when he and I were at Duke.”

Chee hopes that his ticket giveaway will help these two predominant fanbases not only find common ground but also understand each other a little better.

“I really wish Nets fans and Lin supporters can reach out to each other and understand each other better. Understand that there is no typical fan type. Like everything else, there is a spectrum of fans. Let’s try to engage those who are willing to listen and discuss. Be respectful even when we disagree. Try to understand where each other is coming from.”

In addition to understanding where everyone is coming from, Chee mentions something about the average Lin supporter that most Nets fans forget.

“For example,” Chee said,  “for a Nets fan to understand that some Lin supporters never watch basketball until Lin emerge or they were jaded by NBA until Lin emerged, etc. Understand why some Lin fans are so protective of Lin.”

Chee also realizes the road to unity is not a one way street, that the Lin supporters need try to find common ground with this base outside of Lin.

“Lin fans (need) to understand why these fans are hard core Nets fan” Chee said. “Try to also support the Nets besides supporting Lin, even though there is nothing wrong being a fan of a player. Try to learn more about other players on the team, about the coaches, the organization, and support them.”

Chee is waiting for your entries, so get out there and start making friends Nets Nation! This is a great opportunity to score some free seats to a good game while also getting to know your community a little better.