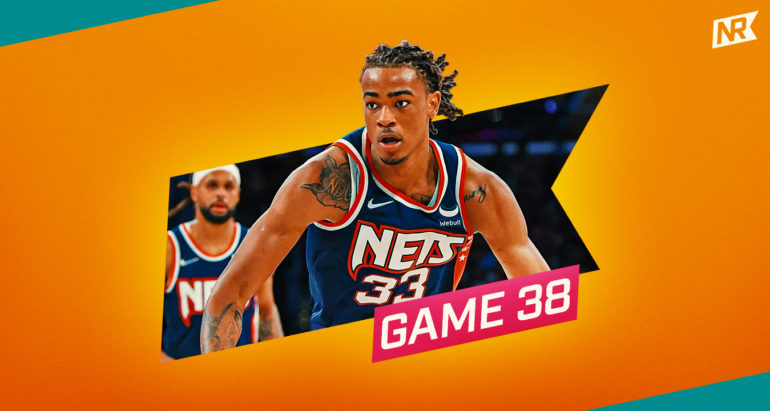 After an embarrassing loss to the Milwaukee Bucks and a five-game losing streak at home, the Brooklyn Nets finally got a win on Sunday against the San Antonio Spurs. In the first half, the struggling Spurs made it seem like this could be the game that the Nets used to right the ship and build some momentum. However, San Antonio never quit as they took the second half by storm and brought the game into overtime. With 1.7 seconds remaining, it was rookie Cam Thomas who saved the day to secure the two-point victory.

The first quarter was a high scoring affair, with the points tied at 32 apiece. Brooklyn’s offense was efficient, shooting above 50 percent overall. Some cause for concern was shooting from three, where they only went 1/6. Kevin Durant led the Nets with 11 points but the Spurs were kept in the game by their three point shooting. San Antonio shot 50 percent from downtown, making six.

The second quarter the Nets took control of the game. They shot efficiently again, shooting above 50 percent. However, the Nets still shot porously from three, shooting 1/5. They were able to surge to their 60–51 halftime lead thanks to their defense, which forced the Spurs to shoot 31 percent from the field and 12 percent from three.

The third quarter is where the game began to swing in the Spurs direction. San Antonio was aggressive and it seemed that the Nets defense was starting to sleepwalk. This, as well as sloppy turnovers, led to a bad end to the quarter. Even with shooting percentages even between both teams, the Spurs still outscored the Nets and dropped a whopping 38 points.

The fourth quarter started to look like the typical Nets fourth quarter. The stars led the way, with the defense locking down. After the Spurs tied the game multiple times, the Nets led by James Harden surged to a 12 point lead with under five minutes to go. However, the Nets went ice cold, and did not score for three whole minutes. The poor shooting must have rubbed off into other aspects of the offense as the Nets committed five turnovers. The defense also looked like it gave San Antonio what it wanted. After Josh Primo’s game-tying three and a missed buzzer-beater attempt by Keita Bates-Diop, the game went into overtime.

In overtime, the Nets shooting woes continued. After a nice jumper to start, Durant went cold, missing his next three shots. Nic Claxton had a nice tip-in basket, while James Harden dropped in a floater. The Nets defense also managed to get itself together, forcing San Antonio to take bad shots. But the Spurs were given extra opportunities due to three more turnovers committed by the Nets. Then, with six seconds to go, it looked like Durant would take the potential game-winning shot. Instead, he passed to rookie Cam Thomas, who drove in and took the shot himself. His floater was the dagger Brooklyn needed to send San Antonio packing, 121–119.

Like it has been throughout the season, the superstars of Brooklyn help carry and lead the way. Most Valuable Player candidate KD continued his stellar play, with his 28 point output. This was the tenth straight game that Durant has scored 25 or more points in. To add on, he dished out six assists, including the game winner, to accompany four rebounds.

James Harden seems to found his groove again after a recent slump. On 50 percent shooting, with 40 percent from three, Harden dropped 26 points. As usual, he continued his fantastic facilitating, passing 12 assists. Harden also grabbed seven rebounds. What was good to see from Harden was his aggressiveness driving to the paint and finishing with clean layups or floaters. When Harden is aggressive, good things happen for the Nets.

It’s clear that Brooklyn needs its superstars to continuously carry the load. The heavy regular season minutes are possibly taking a toll, and they are due for some load management. However, the Nets continued success in the regular season will heavily rely on Durant, Harden, and Kyrie Irving.

The Nets may be efficient in scoring in the paint and shooting the mid-range, but their three point shooting has been poor. In Sunday’s matchup versus the Spurs, they shot 28.6 percent from three. This has been a bad trend as they have shot under 30 percent from three five times in the last six games. It isn’t to say the Nets are “live by the three, die by the three,” but there are trends and correlations to their three point shooting. When the Nets shoot at least 35 percent from downtown, they are 14–1, but when they do not, they are 11–12.

It could be due to players being in a slump or it may be a roster issue as well. The Nets boast many defensive players, but sacrificed the shooting for it. Now, having good defenders is a good thing for Brooklyn, as they boast a top-10 defense, but they need good three-point shooting to compliment the that. Of all the players who shoot at least five three point attempts a game, only Patty Mills and the currently-injured Joe Harris shoot above 40 percent. With the trade deadline a month away, another shooter might be on the wishlist for Brooklyn.

The return of sharpshooter Joe Harris and Kyrie Irving back into the lineup will help solve the majority of this problem. The Nets have seen positives from rookie Kessler Edwards, who is looking like he could be the ideal 3-and-D role player for Brooklyn as he has shot 42.9 from three and has shown to be a lockdown defender in the minutes he’s been given. Maybe Edwards gets more run in the lineup. Deandre’ Bembry has shot well from three, but is mainly a slasher to the basket. The Nets may be good at creating and getting their shots inside the arc, but it needs the outside shooting to be at good levels if they are to be an elite offensive team.

The young players in Brooklyn continue to impress. Nic Claxton had a career day. With continued aggression and energy, Claxton was able to own the rim with great dunks and finishes to a sound 16 points and grabbed a career-high 14 rebounds. Though he did not record any blocks, Claxton has continued to show that he can defend 1–5 and can become the Nets best defender.

On top of his game winning shot, Cam Thomas was active. Though he finished with 11 points on 4/11 shooting, Thomas has continued to show that he can create his own shot and help spark some offense for Brooklyn. He still needs to work on his passing and facilitating as he did have four unnecessary turnovers. Even if he may be late to rotations, his energy on defense and activity helped in grabbing six key rebounds for the Nets.

Day’Ron Sharpe also got some run in today’s game with LaMarcus Aldridge out with right foot soreness. Sharpe continued to show his potential as a high-energy paint big man, finishing with seven points and 6 rebounds. His bully-ball style was huge in getting rebounds in the paint and also creating extra offense for Brooklyn.

As mentioned earlier, Kessler Edwards can be the 3-and-D player the Nets can rely on. In a quick 12 minutes of action, Edwards contributed to 2/3 shooting, with those two baskets from three-point land. Like Sharpe, his activity on the boards and great defense helped contribute to Brooklyn’s victory. Edwards play has continued to prove that the two-way contract rookie deserves time in the rotation.

Getting another start was David Duke Jr. He finished the day with six points, five rebounds, and one assist. DDJ had a great stretch of plays in the second quarter. He had a nice running dunk and alley-oop layup thanks to a Durant assist. To cap off his great play, DDJ had an alley-oop assist to Claxton.

The Nets play again on Monday, January 10 across the country in Portland to take on the Trailblazers. This game was rescheduled from December 23 due to the original date being postponed as a result of the Nets COVID outbreak. Brooklyn hopes to continue to build momentum with another victory, as the Blazers will be undermanned without superstar Damian Lillard, CJ McCollum and Norman Powell. Tip off will be at 10 p.m. EST.

The Brooklyn Nets are currently 25–13. They sit in second place in the Eastern Conference, 1.5 games behind the first place Chicago Bulls.