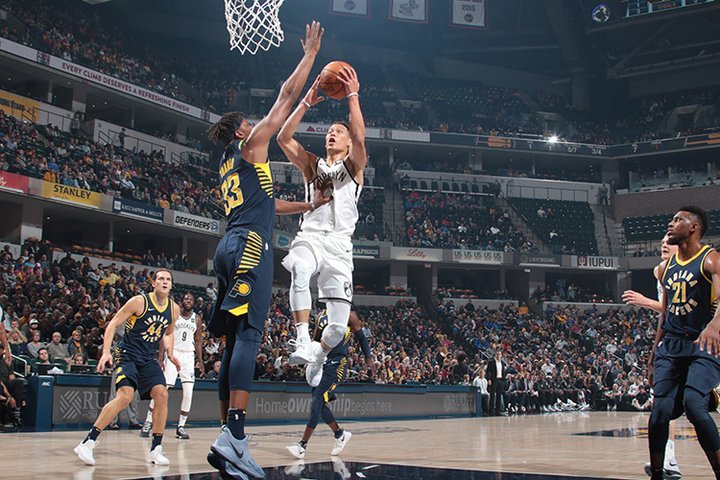 Welcome to the 2017-18 NBA season, Nets fanatics! Great to begin the most encouraging Brooklyn Nets season in a few seasons. Not too encouraging, mind you. Let’s not start reserving Barclays tickets for May yet. However, Brooklyn gets to formulate an identity out of its solid mix of veterans and youth to shine a light on a way to greener pastures in future seasons. Unfortunately, Chapter 1 of 82 concluded in a 140-131 pyromaniacal perishing to the Pacers in Indianapolis. Still, analyze this season intro we must.

Much of the excitement Nets fans have had for the 2017-18 season stemmed from hopes of team leader and starting point guard Jeremy Lin realizing the promise flashed from his injury-prone 2016-17 season. In those 36 games last season, Lin looked tailor-made for Coach Atkinson’s offense and had the Nets playing better than its sum of parts. With another year of familiarity as a Net and hopes of abandonment of his lingering injuries, relative success awaited Lin this season.

Tragically, just three quarters into the season, Lin’s season ended, as reported by ESPN’s Adrian Wojnarowski on Thursday. Lin would make one of his signature slashes into the lane to take off for a layup. Despite getting to the rim in time to force a goal-tend from Pacers center Myles Turner, Lin landed awkwardly on the baseline and crumpled to the floor. Lin declaring “I’m done, I’m done” before succumbing to tears told a pessimistic story of the severity of what proved to be his injured knee. He finished with 18 points and four assists in the only game he will play this season.

An Actual Fence Would Have Played Better Defense

Communication clarity cannot be expected immediately in a lineup rotation integrating multiple new players. However, Brooklyn will require a whole lot of improvement in cohesion to improve its defense to standard porous levels, if the 140 points surrendered foretell anything. A careless 20 turnovers that led to 22 points directly off turnovers certainly contributed to the Pacers’ bombardment. Yet, complete inabilities to either track stretch bigs, cut off guard penetration, or offer impactful contesting at the rim presented more significant culprits of the despicable Nets defense.

Starting center Timofey Mozgov had a rough time following the more mobile Myles Turner to the top of the arc and often elected to just give open jumpers to Turner to disastrous results. Mozgov would have then had to represent as a true brick wall at the rim to justify his defensive decision-making. But, both Victor Oladipo and Darren Collison had success simply exploding over the ground-bound Mozgov to ignore his verticality. If Mozgov cannot offer the stout rim protection he earned his contract with, he quickly becomes unplayable, except against perhaps the few large post-heavy centers of the league.

Worryingly, Quincy Acy and Trevor Booker did not offer much better tracking of the Pacers’ stretch bigs of Thaddeus Young, Myles Turner and Domantas Sabonis. Despite their great mobility advantages over Mozgov, Acy and Booker did not have the mental sharpness to execute clean rotations after multiple passes from the Pacers’ offense. The Nets will require at least an improvement at rim stops or an improvement at those late-clock rotations to not approach historically bad defensive levels. The Pacers even only shot 9-of-34 from beyond the arc (26.5 percent) en route to those 140 points. The score could have been much more laughable. Yeesh.

D’Angelo Russell’s Nets debut went better than his amigo from the Lakers, Timofey Mozgov’s, did. A lot better. Still demonstrating the Kermit-colored light he hinted at in the preseason, Russell stayed efficient with his high volume by scoring 30 points on 22 field goal attempts. Within the bombs-away nature of the Atkinson offense, Russell found enough space to go 4-of-8 from three-point range, yet never seemed to simply chuck a shot. Russell also stayed active in leading the Nets in transition to conduct the offense at Atkinson’s preferred frantic tempo. Russell carried to Indiana the same defensive flaws he highlighted in Los Angeles and the preseason. Those deaths on opposing ball screens or inadequate slides to mirror perimeter ball-handlers will be grinned and beared though, if Russell can orchestrate such devastating shot-making and ball movement consistently. Especially without the presence of Jeremy Lin to aid in the concerto.

Nets’ Bench Proves to Be a Boon

Trevor Booker may have had an uncharacteristic hand in Domantas Sabonis’s 7-of-7 night against the Nets, but Booker had quite a game offensively himself. He mastered the art of finding dangerous space around the paint while not clogging the driving lanes for Russell, Lin, Caris LeVert, Rondae Hollis-Jefferson or Spencer Dinwiddie. Booker amassed an eye-popping 20 points and 10 rebounds in his sixth man role. Six of the boards came on the offensive glass. The power forward offered a welcome safety valve to his perimeter-oriented teammates time and time again.

Allen Crabbe offered another welcome spark off the bench in his Nets debut as the most gravity-pulling marksman in the Nets’ rotation and unexpectedly acting as the Nets’ most impressive defender in a night lacking any others. Crabbe knocked down two of his three downtown attempts and got fouled on another attempt from beyond the arc. However, Crabbe also gave surprising energy rotating off-ball on defense and causing deflections. Crabbe even succeeded in swatting a Oladipo three-point attempt to lead to an assist on a Trevor Booker transition layup. Add in seven defensive rebounds, and Crabbe seems determined to not be known as solely a three-point specialist.

Caris LeVert also showed encouraging prowess in using his length to disrupt some plays on the defensive end. LeVert continued to flash secondary playmaking skills by distributing four assists in his 28 minutes of playing time. However, the sophomore struggled to finish with strength and balance, and his jumper struggled to fall. Any worry of getting lost in the shuffle with Russell’s arrival should be pushed aside for now, though.

The Brooklyn bench, as it may have to often this season, kept the Nets afloat often. The bench has the ability to maintain the rapid tempo of the starters and the ability to perhaps provide even more spacing with Acy, Crabbe and LeVert beyond the arc. Opposing starters may be able to handle Brooklyn’s style with their own talent advantages, but few teams build bench lineups that can thrive in such a setting. The bench contributions of Acy, Crabbe and Booker sparking a 14-6 run to close out the last four minutes of the first quarter exemplified that to the T.