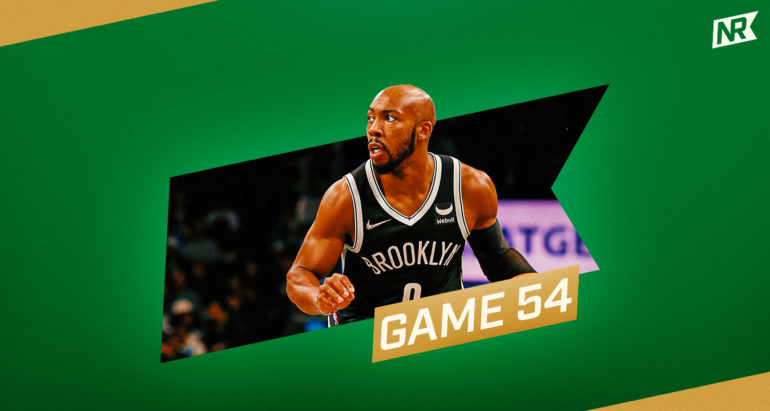 I mean…did you expect anything different? That gif of Oprah lifting her hands up as if to say “Duh” is a perfect summation of this game.

The game started in arguably the worst fashion one could think of. The Celtics began the game on a 14–0 run and for a brief period, it looked as if the freshmen team was scrimmaging against the varsity squad. Brooklyn’s offense was a jumbled mess. It could have had something to do with the starting lineup (the 29th one used by Brooklyn this season) that consisted of Patty Mills, Bruce Brown, DeAndre’ Bembry, Kessler Edwards, and Blake Griffin. Now one might ask “Where is the shot creation?” and your guess is as good as mine. This isn’t to say that there was some perfect starting lineup given the circumstances and available players at Steve Nash’s disposal. However, starting five guys together who rely on others to get their points certainly is an idea.

The first quarter went from bad to worse as Boston would take a 28–2 lead. It almost seemed unfathomable that the team could be down by 26 points so early in a game. This changed once some of the bench guys checked in. The reserves gave Brooklyn a shot in the arm of energy. Jevon Carter’s outside shooting and David Duke Jr.’s hustle on defense spurred on Brooklyn to an 11–0 run breathing some life into the Barclay’s Center crowd.

Carter would continue making it rain from deep in the second quarter but Boston, who came into the game as one of the hotter teams in the league, just had too much firepower for Brooklyn. Marcus Smart had one of his better shooting nights from distance on the season and Jaylen Brown was getting to the rim at will. By halftime, the Nets found themselves down by 26, which was their largest halftime deficit since 2016.

The second half was more of an open gym run as Boston emptied their bench toward the later parts of the third quarter. There really wasn’t much to talk about in regard to how the rest of the game transpired as the Celtics cruised to a 126–91 win. To put into perspective how rough of a night it was; none of the Nets’ starters reached double-digits in scoring

Since there wasn’t much to really go in-depth with, it is worth giving a shout-out to some of the more notable things on the night starting with Jevon Carter who led the Nets in scoring with 21 points. Carter knocked down a season-high seven three-pointers with all but three of his shot attempts coming from beyond the arc.

David Duke Jr. made the most of his time in this one after a string of quality games with Long Island. His impact was felt immediately, and his nonstop energy was a breath of fresh air. Although he struggled a bit with the three-point shot (1-for-6) he still managed a respectable 13 points including a highlight-reel alley-oop slam late in the fourth quarter.

Unfortunately, it was another rough outing for Kessler Edwards who appears to have hit a rookie wall. Even with being inserted into the starting lineup, Kessler played the least number of minutes (16) of any Nets player and was the only one to go scoreless.