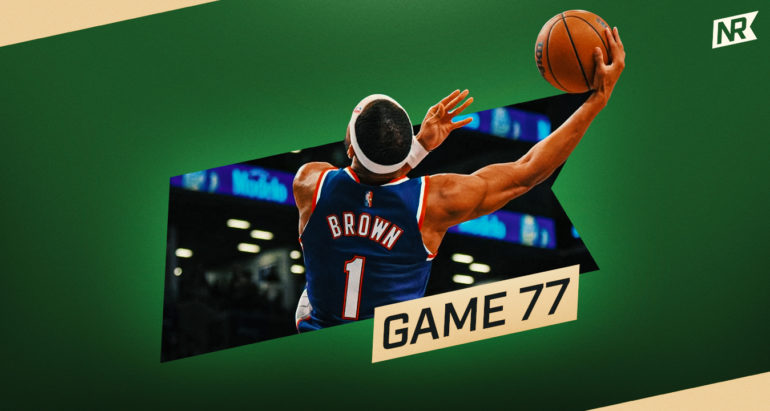 The Brooklyn Nets and Milwaukee Bucks have developed a rivalry since their Eastern Conference Semifinals matchup in 2021. Every time these two teams play, it is bound to be a show. During their last meeting, Kyrie Irving led Brooklyn to an upset win on the road, shocking the Bucks on their home court. This time around, Irving joined Kevin Durant at the Barclays Center. Despite an impressive effort from both stars, the Nets fell just short at home.

Brooklyn’s defense was phenomenal to open up the game, containing Milwaukee efficiently. The team as a whole played excellent basketball across the board. Individually, each starter made an impact. Durant was sensational in the first quarter, scoring seven easy points alongside five beautiful assists, including a dazzling sequence to end the period. Bruce Brown and Seth Curry contributed early on, knocking down their open looks and creating opportunities for Brooklyn’s offense. Nic Claxton was fantastic, feeding off of KD’s spectacular playmaking.

In the second quarter, the positive momentum continued but with several hiccups. Brooklyn maintained a solid lead throughout most of the first half, but multiple missed opportunities allowed Milwaukee to hang around. Every time the Nets had a chance to go up by double digits, a pointless error would give the Bucks life. Giannis Antentokounmpo had his way, scoring at will while facilitating at a high level. Despite the mental lapses, Brooklyn did head into halftime with a 60–56 lead.

The third quarter began in similar fashion. Brooklyn played well enough to stay in front, but could not pull away by larger margins. Irving was the glue that held the team together in the third, hitting timely buckets while pushing the pace for Brooklyn. Patty Mills and Brown continued to make hustle plays, maintaining a high energy that was desperately needed. Durant had his struggles for the majority of the quarter, which led to the Bucks holding an 87–86 lead going into the final 12 minutes.

In the fourth quarter, Brooklyn had to claw back continually. Poor decisions on the offensive end resulted in the Bucks clinging to a slim lead for the first six minutes. As time ticked by, however, Brooklyn turned the tide. The Nets took a 99–96 lead, and then something happened that changed the rest of the night. Khris Middleton was called for a flagrant foul on Brown, who was driving to the hoop in a wide open lane. Middleton was ejected, and Brooklyn took advantage. An unbelievable sequence resulted in a Durant three-pointer, followed by a steal and then topped off with an Irving-to-Durant alley-oop.

However, Milwaukee kept the pressure on Brooklyn, and eventually stormed back. With less than 30 seconds left to play, Giannis hit a step-back three to tie the game at 110 a piece. Durant came up short on a game-winner, and we went to overtime in an eerily familiar manner to the semifinals Game 7 affair.

Overtime was about as intense as it could possibly get. Milwaukee went on top quickly, and would not let go. Despite the Nets having multiple good looks, the Bucks defense stifled most of their shot opportunities. With Milwaukee up by two points, Durant was fouled at the three point line. Durant hit all three, putting the Nets up 119–118 with eight seconds left. The Bucks elected to not call a timeout and Giannis was fouled, hitting both free throws. With three seconds left, Durant barely missed a fadeaway jumper, almost identical to how Brooklyn lost to Milwaukee in Game 7. The Nets now falls to the 9th seed with a 40–37 record. The final score: Milwaukee 120, Brooklyn 119.

Bruce Brown was exceptional on the night, scoring a season high 23 points. On top of that, he racked up four rebounds, three assists, and three major blocks. If Brown can continue to contribute in big games as he did on Thursday, the Nets will be in excellent shape moving forward. After a slow start to the season, Brown is playing the best basketball of his career, at the perfect time.

Unfortunately, Brown committed a poor offensive foul in the final seconds allowing Milwaukee a chance to tie the game, which they did. But, that should not take away from his outstanding performance. Brown has earned himself a starting role with this team. If Ben Simmons does not return from injury, expect Brown to start permanently.

Thursday night was a difficult loss for Brooklyn. With every game being a must-win at this point, losing in this fashion is devastating. Still, there are some valuable lessons to be learned from this defeat. If Brooklyn wants to be a legitimate championship contender, they need to tighten up down the stretch. With three minutes left, the team led by nine points, and held momentum. Somehow, they let all of that slip away, even with Durant and Irving on the court. With just five games left, Brooklyn cannot afford to let their guard down again.