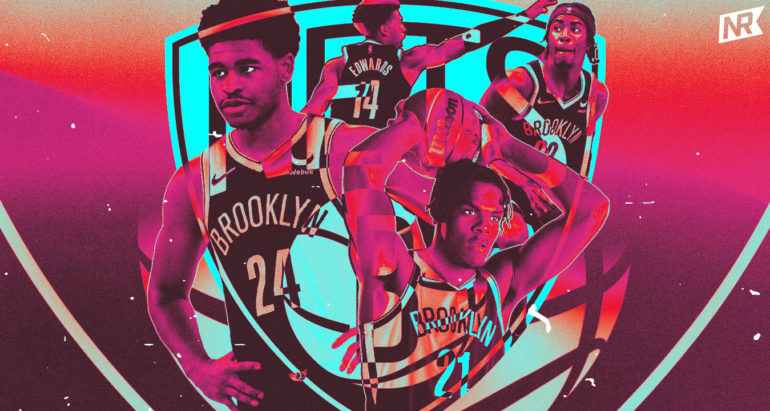 Early last season, the Brooklyn Nets completed a blockbuster multi-team trade that ultimately sent superstar James Harden to Brooklyn. This trade required the Nets to give up their young, potential stars in Jarrett Allen and Caris LeVert to the Cleveland Cavaliers and Indiana Pacers, respectively. On top of the two young players, the Nets also had to trade away a boatload of unprotected first-round picks and pick-swaps until 2027.

Giving up Allen and LeVert with those picks made many believe, even if it was the right trade to do, that Brooklyn completely mortgaged their future for a shot at an NBA championship. One could have argued that Allen, who had developed into a great roll threat and rim protector, and the oft-injured LeVert, who showcased his ability to become a flamethrower scorer, would’ve been even greater contributors to a Nets title run.  In the moment, many saw the picks the Nets gave up to Houston as eerily similar to the infamous Celtics trade involving Kevin Garnett, Paul Pierce and Jason Terry. Could Sean Marks have made a similar mistake?

The first year of the Nets Big Three of Kevin Durant, Kyrie Irving, and James Harden, ultimately ended with a series riddled with injury leading to their second round exit to the eventual champion, Milwaukee Bucks. That off-season general manager Sean Marks went to work. Marks traded guard Landry Shamet to Phoenix for the 29th pick of the 2021 NBA draft. Somehow, some way, Marks ended up with five picks in the 2021 NBA draft, two first rounders, and three second rounders.

Marks and the scouting department deserve lots of credit for what they have done, and they have a specialty in finding diamonds in the rough during the draft. They drafted LeVert and Allen late in the first round of their respective drafts, and found Nic Claxton in the second round of his draft. The 2021 draft was no different. At the end of draft night, Marks and the Nets completed a class that consisted of Cam Thomas from Louisiana State University, Day’Ron Sharpe from North Carolina, Kessler Edwards from Pepperdine University, Marcus Zegarowski from Creighton University, Rai’Quan Gray from Florida State University, and undrafted rookie David Duke Jr. from Providence University.

Through a quarter of the season, the young rookies have exceeded expectations with their abilities, even when they are trying to figure out life in the NBA. They have shown they can be integral pieces of a championship contending rotation, and are ready to step up in emergency situations. The rookies are not only disproving the narrative that Brooklyn will not have a future after a Big Three, but that the rookies are part of the championship now.

At this point in the season, Cam Thomas has become a household name among Nets fans and social media. Known for his scoring ability, Thomas made it clear that this skill would translate to the NBA while he was at Summer League in Las Vegas. One of the more memorable moments would be his overtime game winner over Corey Kispert and the Washington Wizards. His continuous green-light, high scoring output would provide a Summer League leading 27.0 points per game to a Summer League MVP award.

Thomas would start the season with Brooklyn on the bench or be sent to Long Island to play with the G-League team. Again, Thomas showcased his spectacular scoring ability in the G-League, as he put up 46 points in a game versus Raptors 905.

With injury to to Joe Harris and Kyrie Irving not yet available, Cam Thomas was thrust into the lineup. Thomas has continued to show his ability to create his own shot, which helps alleviate pressure from Kevin Durant. Thomas has also shown his ability to take catch-and-shoot threes and play off ball.

Overall, Thomas has been doing a solid job proving his place in the rotation. Though he may have questionable shot selection, sometimes it’s worth it when his acrobatic shots go in. However, Thomas will still need to take smarter shots as his career progresses. One of the biggest criticisms for Thomas was his passing ability, and he is slowly developing that skill, showing the ability to quickly pass on the pick-and-roll or drive-and-kick situations.

The second first round pick for Brooklyn would be center Day’Ron Sharpe from North Carolina. At the time of his pick, fans started to believe that Sharpe could be the player to help solve the big man problems for Brooklyn.

So far in Sharpe’s young career, he has rode the bench for the Nets and has played in spot minutes. However, Sharpe has seen a good amount of time in Long Island. His most notable performance was his 27 point outing versus the College Park Skyhawks.

What can be noted about Sharpe is his high energy, and activity on the boards. His ability to get offensive rebounds is important in extending Brooklyn possessions. He also has the build to be a bruiser in the paint as well. Sharpe has to improve his shot from deep, which he currently shoots at 33 percent. Sharpe also has shown promising defensive ability to protect the rim, but needs to improve footwork and quickness to guard the perimeter. Sharpe’s conditioning is also a work in progress. Nonetheless, his energy exudes on the sidelines, as he is always up and jumping as the hype man for the team.

Edwards has been one of the more underrated, under-the-radar draft picks for the Nets. The three year man out of Pepperdine was touted as a future 3-and-D contributor, with his long wingspan and his career 39 percent shooting from deep. Thankfully for the Nets, they were able to draft him with the 44th pick. Though Edwards struggled in the Summer League, the Nets saw enough of what they liked to sign him to a two-way contract.

With Edwards being on a two-way, he spent some productive time with the Long Island Nets. Edwards averaged 15.6 points per game on 41 percent shooting, but more importantly 37.5 percent from three. On the defensive end he grabbed six rebounds per game, and 1.1 steals per game.

Edwards broke out and proved his worth to the Nets in his first game of actual game action. His 17 point, 10 rebound double-double versus the Toronto Raptors won many fans over and sparked debates of him being a key contributor to the Nets rotation.

Edwards looks very pro-ready and seems like he can truly be a contributing role player for the Nets. With Edwards being an aggressive offensive player, his ability to space the floor and shoot at a respectable percentage from three is important in the type of offense the Nets run. He is also a smart cutter, getting to spots to quickly score at the basket. He has shown flashes of great defense with his long frame, clamping the defenders he is assigned too. Like Sharpe, he also shows a great amount of energy on the boards and urgency to do the nitty gritty.

The biggest area Edwards can develop is quick-time decisions when it comes to shooting versus the extra pass. Wide open, Edwards will shoot, or when he notices the defender closing out, he’ll swing for the better shot. However, there are moments where he will show hesitation in deciding when to shoot or pass, and ultimately the decision making will be a huge boost to his game. Nonetheless, Edwards has lots of potential to develop into something great for Brooklyn.

The other two-way contract was awarded to undrafted rookie David Duke Jr. The three-year Providence product was touted as an all-around guard prospect, a player who can play on-and-off ball, as well as score at all levels, even with sketchy finishing stats. More importantly, DDJ was also promoted as a solid defensive player, something the Nets needed this past off-season.

For Brooklyn, DDJ has been a pleasant surprise. Though there have been issues with his finishing and shooting ability in his five appearances for the Nets, there have also been plenty of bright spots. Most notably his defense and rebounding. On-ball he has shown to be an aggressive defender hounding opposing ball-handlers, off-ball DDJ has been a pest with solid ball denial. This has led to a solid 1.2 steals per game.

Moving forward, DDJ will have to improve his finishing at the rim and find consistency in his shot to be a key contributor for Brooklyn. The potential is very much there, and with development both in Brooklyn and Long Island, DDJ can become that two-way guard off the bench for the Nets.

While both Marcus Zegarowski and RaiQuan Gray were drafted by the Nets, they weren’t signed to Brooklyn. Instead, they were draft-and-stashed to Long Island. Though they won’t be suiting up in Brooklyn this season, they can be developed into future role players for the Nets as they play for Long Island.

Coming into the draft, RaiQuan Gray was deemed as a bulky, bruising forward at 6’8″, who can use his strength to play bully ball, with solid face-up abilities. However, his lack of a three-point shot would hamper his game. This has largely been the case in Long Island. So far he has averaged 8.8 points per game and 8.3 rebounds per game. Lots of his scoring has been inside the paint in strong drives to the basket. Gray’s size and bulkiness has also been a great factor in his ability to be a solid interior defender and rim protector.

Marcus Zegarowski was a three year product out of Creighton. Zegarowski was known for his ability to score and shoot well from three. In the Summer League, Zegarowski did flash that ability of being a microwave scorer, putting up a solid 12 points off the bench on 62.5 percent shooting.

So far in the G, Zegarowski is struggling from the field, shooting 34.1 percent overall, and 31 percent from three, while averaging 12.5 points per game. Zegarowski occasionally showcases his potential as a sniper from downtown, most notably when he hit six straight threes to open up a game versus Capital City Go-Go

Though Zegarowski may struggle now, once he finds his consistency with his shooting ability, he could very much be suiting up for Brooklyn next season.

The six Nets rookies have shown flashes of their potential of what they can become as NBA players. With some players becoming instant contributors, and others waiting in development, the Nets organization and fans, should be excited of what’s to come from the young guys. Though it is extremely early, these rookies are starting to kill the “Nets have no future” narrative.