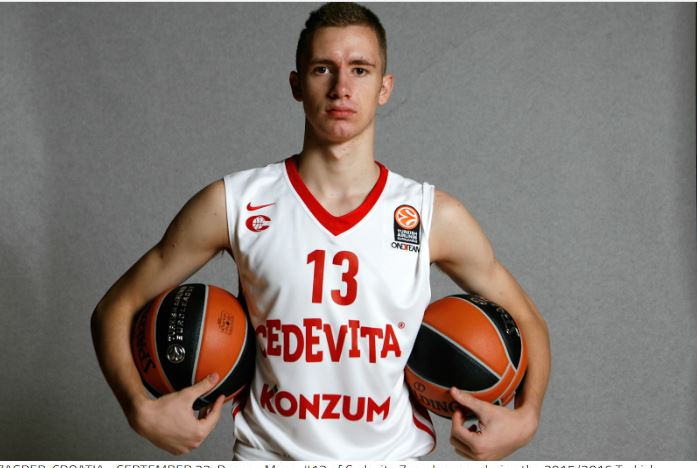 During Thursday’s NBA Draft, the Brooklyn Nets used the 29th overall pick on 6-foot-9 Bosnian forward Dzanan Musa, a decorated young player who’s eager to come to the States and showcase his potential. The Nets passed on the likes of Khyri Thomas and Keita-Bates Diop for a prospect who’s relatively unknown to the general population, and the 19-year-old provides something Brooklyn desperately needs — wing scoring.

In 16 EuroCup games with Cedevita this past season, Musa averaged 18.7 points and 5.7 rebounds per 36 minutes while shooting 47.5 percent from the floor, 36.4 percent from three-point land and 75.6 percent from the foul line. Before that, he made waves as a dominant force with Bosnia’s youth national teams. In 2015, Musa and his U-16 squad were FIBA Europe gold medalists. For the tournament, Musa led all scorers with an average of 23.3 points a night, including a 33-point explosion against Lithuania in the final. He maintained the hot hand through the summer of 2016, where he averaged 34.0 points per game during a run through the FIBA U-17 World Cup. Bosnia failed to reach the championship and finished in 9th place. However, during a contest against Chinese Taipei, Musa dropped 50 points in just 27 minutes.

Musa is a slasher but has improved his perimeter game considerably over the last few years. He balances himself out by being a deft ball handler, capable of slithering around the defense and slipping through tight angles to reach the basket. At this juncture, Brooklyn doesn’t have that presence at the forward position. DeMarre Carroll is a spot-up shooter. Rondae Hollis-Jefferson is defensive-minded (but also improving offensively). Caris LeVert is being groomed to be more of a playmaker than a shot creator.

The best part about the Musa selection isn’t that he wants to join the team as quickly as possible, but that he’ll make an impact sooner than later. There will, of course, be growing pains. The speed and physicality and athleticism of the NBA will take some getting used to. But Musa can build confidence as a shooter and then begin to expand his game. His stoke is smooth, and he gets it off regardless if it’s a pull-up off the dribble or a spot-up off of a pass. In a system that emphasizes ball movement, a fair amount of open looks will come Musa’s way. The offense then becomes slightly more dynamic once he starts getting comfortable with his game.

Dzanan Musa is far from the most explosive player in this class. He, like most guys with that disadvantage, is effective at changing speeds and is rather shifty for a guy of his size. His handle isn’t as tantalizing as Kyrie Irving or Stephen Curry, but it’s enough to keep the defender off balance and create just enough separation to either blow by or get a shot up. If Musa’s driving lane gets cut off, he’s got a handful of floaters and off-balance push shots to which he can resort. They aren’t the highest-percentage attempts, but he seems to have a knack for converting difficult looks. Brooklyn could free him up by using him as a ball handler in the pick-and-roll.

Musa loves playing downhill, and a solid screen helps him gather speed. He can get a step or two on his man and glide to the cup. If that doesn’t work, and his defender goes under the pick, he can stepback and have a clean look at the basket. The only issue with that set is Musa isn’t a great decision-maker. In 323 EuroCup minutes, he committed 22 turnovers and recorded just 14 assists. As long as he’s capable of making the simple play, however, the concern isn’t too glaring.

Defensively is where Dzanan Musa has his most prominent struggles. On top of not being an elite athlete, his wingspan is equal to his height. That could cause some problems in the NBA. Not everything is terrible, though. For 2017-18, Musa averaged 1.2 steals per 36 minutes, and that mark was significantly higher (2.0) the year previous. He’s at least active on the perimeter, and giving effort will help overshadow any physical limitations. With the Nets, his deficiencies are likely to stand out because of how weak the collective defense is. There’s nowhere for him to hide.

Looking at Musa’s potential and his body of work makes it hard to criticize the Brooklyn Nets’ decision to draft him. He’s still super young with a sturdy foundation and tremendous amount of room for growth. His shooting touch and ball skills are reliable and make him such a prolific scorer, and his game should transition seamlessly from Europe to the NBA.