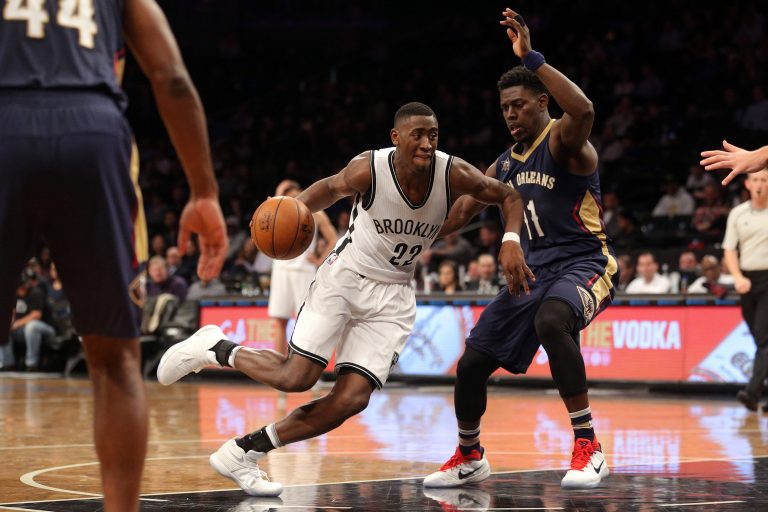 The Brooklyn Nets took a risk on potential over health issues to obtain Caris LeVert and so far the guard is proving Sean Marks’ choice was well merited.

The Brooklyn Nets’ decision to trade forward Thaddeus Young to the Indiana Pacers in exchange for the rights to Caris LeVert, (the 20th pick in the 2016 NBA draft), was met by speculation from fans and experts alike. In hindsight the trade made sense. Brooklyn were trending downward and towards the bottom of the Eastern Conference. Trading a useful veteran with a hefty contract in exchange for draft compensation was the answer.

What didn’t make sense was acquiring the rights to Caris LeVert, an injury-prone guard from the University of Michigan. Coming into the draft LeVert had undergone two stress fracture surgeries on his right foot during his sophomore and junior seasons at Michigan. LeVert was coming off of Jones fracture surgery on the same foot that cut his senior season with the Wolverines short. The potential was obvious with LeVert. He averaged 16.5 points, 5.3 rebounds, and 4.9 assists in the 15 games he appeared in during his senior season. Yet, the injury history pertaining to his left foot was a huge red flag for many organizations.

A season and a half later, LeVert is thriving with the Nets and looks like he may end up being one of the better players to come out of the somewhat underwhelming 2016 NBA Draft. Injuries to Brooklyn’s guard rotation has thrust LeVert into the backup point guard role. The sophomore seized the opportunity and ran with it.

LeVert is currently averaging 11.7 points, 4.2 assists, 4.0 rebounds, and 1.2 steals for the Nets. He hit his stride in December, where he averaged 14.3 points and 5.4 assists while shooting 49 percent from the floor. As the floor general of the second unit, LeVert demonstrated growth and improvement in his game. Like all youngsters however, there remain kinks in his game. Moving forward Kenny Atkinson and the Brooklyn Nets’ staff will focus on helping him improve those.

Moreover, he’s grabbed more rebounds (152) than Bismack Biyombo (147) and Marcus Smart (124), all of which come off of the bench. Additionally, the former Wolverine has grabbed the fourth most steals (48) out of all bench players, more than Marcus Smart (43) and Kelly Oubre Jr. (32).

Looking at those stats alone, you can grasp the idea that LeVert has solidified himself as one of the best all-around players off the bench in the league, just two seasons into what could end up being a long and prosperous career.

LeVert is seventh out of all bench players (who’ve played a minimum of 25 games) in assist percentage at 27.6, meaning he’s accounting for 27.6 percent of the team’s assist production when he’s on the floor. The point guard has been helming a Brooklyn bench that is second in the league in points per game. This reserve unit averages 44.8 points. Additionally, the bench unit rank  second in total bench points scored with 2,241 points on the season.

LeVert’s shooting still could use some improvement, which we’ll touch on a little later, but the 6’7 guard uses a lengthy 7’0 wingspan combined with his explosive athleticism to finish at a satisfying clip around the basket. Within the restricted area, the sophomore is converting at a rate of 60.3 percent, slightly below the league average of 63.0 percent.

Many of his attempts at the rim are generated by LeVert himself, as 72.3 percent of his shots made in the restricted area are unassisted. One of the areas where LeVert has taken a huge step and excelled in this season is in transition. The guard rushes down the floor after a missed basket, often receiving the outlet pass around the half court line, and continues to push the floor with the ball in his hands, sometimes taking on multiple defenders on his way to the rim.

In the play below, Jarrett Allen pushes the ball ahead to LeVert, who catches it at mid-court. LeVert continues to push the tempo with the ball and floats around Marcus Morris, finishing with a slick left-hand with a little bit of English.

LeVert has a few downsides that still hamper his ability to be an effective backup point guard. In the section above, I mentioned  LeVert was finishing at a clip of 60.3 percent around the rim. Once the sophomore starts moving away from the basket, that shooting percentage drops dramatically. 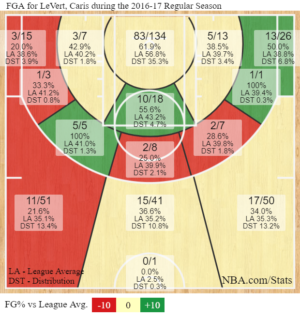 LeVert is shooting just 33.8 percent on jump shots, including 32.9 percent from deep. For the former Wolverine to become a starting caliber point guard or sixth man off the bench, he will need to drastically improve on those shooting numbers.

Of particular concern is the lack of jump shooting improvement. Little variance exists between his rookie and sophomore seasons. Even small improvements on his jumper could have a huge impact on his offensive game.

Another part of point guard duties that LeVert has struggled with this season is taking care of the ball. The guard is averaging 2.4 turnovers per game and only has an assist-to-turnover ratio of 1.75 assists per turnover.

Of players who appeared in at least 25 games this season, LeVert’s assists-to-turnover ratio places him 162nd. In comparison, Spencer Dinwiddie, who now helms Brooklyn’s starting lineup, is posting the fourth best ratio at 4.10 assists per turnover.

The sophomore needs to cut down on bad passes like the one below. In this example he over-penetrates and finds himself too far under the basket to put a shot up. This leads to forced passes which often result in a turnover.

The Brooklyn Nets have an outstanding number of young guards on the roster with Spencer Dinwiddie, D’Angelo Russell, Jeremy Lin, Isaiah Whitehead, and LeVert all looking to receive playing time when healthy. Russell is obviously a part of the Nets’ plan for the future. But Dinwiddie, Lin, Whitehead, and LeVert are all question marks at this point.

Dinwiddie is experiencing his best pro season which likely solidified him as Brooklyn’s starting point guard for the foreseeable future. The caveat of course being the uncertainty of  Jeremy Lin’s health and whether he can return to reignite the chemistry with Russell which worked so well prior to injury. That leaves LeVert in contention with Whitehead for the backup point guard spot of the future. This seems to be leaning in LeVert’s favor as things stand currently.

LeVert has the physical tools and basketball ability to eventually become a valuable sixth man or a starting point guard. The question is how long Brooklyn will wait for the sophomore before losing faith and making him available via trade.