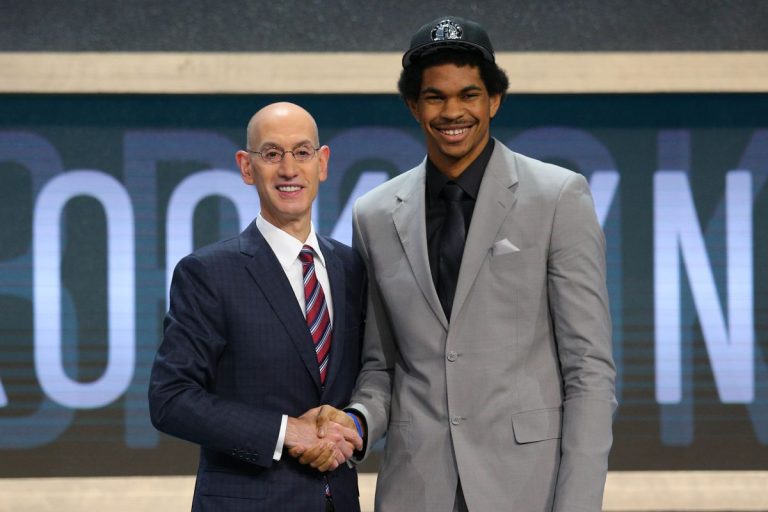 It’s Time To Embrace The Calm

We are only days past the last blockbuster trade to happen around New York City hoops, and just days away from the 2019 NBA trade deadline. The Mecca of Basketball is under the spotlight yet again after the New York Knicks, in what seems to be a move that contradicts their recent history, sent young sensation Kristaps Porzingis packing to the Dallas Mavericks in exchange for what looks to be a more promising future for the blue and orange in former Mavericks point guard Dennis Smith Jr. and the cap space that they’ll enter the summer with.

Nine years after making cap room for LeBron James and then getting turned down, New York is gunning for Kevin Durant and Kyrie Irving. Entering the decade, the Knicks gambled and miserably failed, settling on Amar’e Stoudemire as their marquee free agent signing of the summer. Talk about a blunder. The Brooklyn Nets, meanwhile, were still on the under-the-radar-moves market back the, signing the likes of Jordan Farmar and Travis Outlaw. It wouldn’t be until later in the season when both New York franchises blew the horns and traded for Carmelo Anthony and Deron Williams.

From that point in February 2011 until today, only a couple of the moves that have sent shockwaves around the league had their epicenter in NYC. Bargnani joined the Knicks in 2013 while the Nets basically destroyed anything resembling a bright future in the trade with Boston, pushing the win-now mentality to unexplored limits. Good for both NY-based franchises, it seemed like they had learned the lesson with time and perspective taking a place in their paths until KP got kicked out of town entering this past weekend.

Now hear me out. I like trades. Actually, I love trades, and I’m sure you do too. They keep the league alive, they get us glued to our phones refreshing Twitter faster than it can handle it and they are fun to speculate and make stories with, fantasizing about what could and could not happen. The problem, though, is that trades bring agitation, and agitation is not good all of the times. What just happened with the Knicks trading Porzingis, come to think of it, makes me see the franchise in some sort of empty and peaceful place at first thought. They have traded not only KP but also Tim Hardaway Jr., Courtney Lee, and Trey Burke. They have received two guys they will probably cut in Wesley Matthews and DeAndre Jordan. Basically, New York has emptied the room and traded for things-to-come. The thing with this is that the hopes the Knicks will carry from this point to next July when they’ll need to go all-in are surreal. They are and will be over the top. Anything sort of bringing the two best available FAs will feel like a loss.

Brooklyn, on the other side of the coin, remains in a completely different place and stage. Don’t be fooled, though. The Nets have the assets and armory to go all-in themselves and snatch Anthony Davis from New Orleans. It would be the most resembling gamble to what the Knicks have done by trading their franchise player. Would it give Brooklyn a better chance at winning the championship? Surely, not a lot of players best AD’s game. Would it be an intelligent move? Nope. No. You know what happened the last time the Nets went for it with a big move. Yes, they made the playoffs. Yes, they lost only against the mighty Miami Heat. Do you know what did they do too? Get into a four-year tailspin that saw the franchise end with a losing record each and every one of those seasons, only to–seemingly–break that span this year.

Brooklynites appreciate the current situation. The front office should too. The vibes around the team can’t get any better. The roster has been affected by injuries as much as you can think of, yet the Nets are still out there battling on a nightly basis. Although results have not gone the Brooklyn way lately with a losing record during the past five games, the season saw a 180-degree turn when the calendar flipped to December. The Nets went from 8-15 at that point to 28-25 by the end of January. They were rewarded with four All-Star call-ups (Russell to the main event, Allen and Kurucs to the youngins’ gig and Joe Harris to the three-point contest).

You can read those last four names again, and try to find some commonality among them. Was I to tell, I’d say they all fit the homegrown, franchise-developed model to a point. Yes, D’Angelo Russell was acquired via trade with the Lakers, but he was an outcast in Hollywood and he was kicked out at the first chance LA had before betting on Lonzo. He has found a home in Brooklyn and nobody can’t tell me he doesn’t look like he’s finally got his stuff right and is on the path to becoming something big. Joe Harris has spent more time in the G-League than in the NBA after being taken by the Cavs in the 2014 draft. Brooklyn didn’t appear in his bio until 2016 when they bet on him by signing the Washington State native to a multi-year deal in July. He just re-signed with the Nets this past summer for no less than $16MM.

Jarrett Allen and Rodions Kurucs, well, no explanation needed. A 22nd and 40th picks by the own Nets, these low-key, under-the-radar, unheralded prospects are now making more than a few franchises regret their draft decisions. Yes, non-lottery picks are usually a crapshoot. But you have to know your stuff and still make a pick, and it is not just pure luck when you get these two folks in back-to-back years. And don’t forget about someone named Dzanan Musa who happens to be lighting the G League up and looks like another key piece for what is yet to come to Brooklyn, same as late call-up Theo Pinson.

So, all in all, the franchise still doesn’t have a roster capable of putting together a deep run into the playoffs. There are flaws, there is a lack of talent (or, at least, fully-developed talent), and the rotation depth is hurt by injuries. A win-now move like going for Anthony Davis would bring immediate–but to my eye false–hopes and expectations to Nets’ fans. A top-five player carries that aura and the need of winning, no matter what is around him (ask LeBron James and his fringe-quality roster). Not a lot of franchises are in the position Brooklyn is at now. Not too good, not too bad either, but surely based on a young core of players with tons of upside and even cap room to spend on game-changers this next summer without the need of pulling the trigger on some risky moves like those performed by the Knicks this past week.

I already wrote a few days ago about how the impression of New York being a blue-and-orange landscape is turning. Turns out the very own Knicks are helping that change happen at light speed now without a visible face in their roster and everything up in the air. Brooklyn’s DLo, Dinwiddie, Allen, and company are the straw that stirs NYC’s drink.

Let me say it again. We all like some trade-related excitement, but we better calm down a little, see the deadline come and go, focus on developing the roster and the young players during the following months and set our dreams on who could arrive come July when the free agency gates open for everyone. Yes, even to those who didn’t take the biggest gamble ever in the history of their franchise and could have potentially give away the most prized player to ever step on their court as one of their own in quite some time.