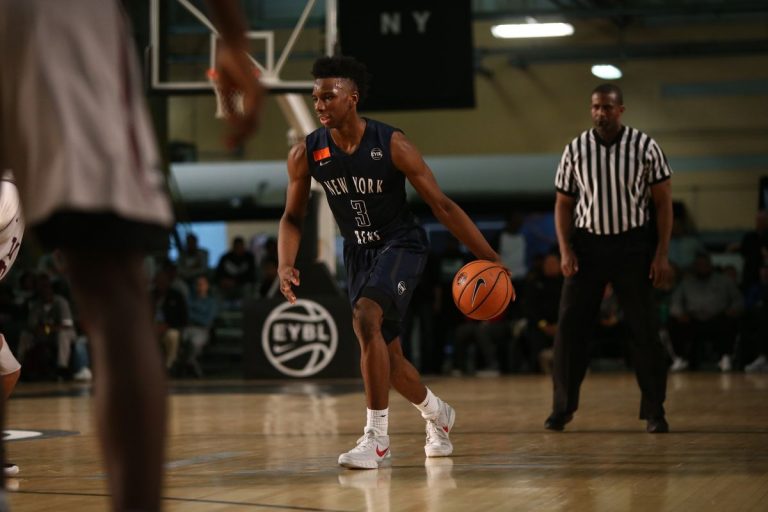 If Hamidou Diallo Stays In The Draft, The Brooklyn Nets Need To Take Him

The Brooklyn Nets are looking to duplicate last year’s success of drafting late in the first round after hitting the Caris LeVert pick out of the park.

With two selections late in this year’s draft, Brooklyn will need to be both careful in selecting players that can make a lasting impact but also not be afraid to gamble on risky prospects. One prospect the Brooklyn Nets should seriously consider gambling on is Queens native and University of Kentucky (possible) none-and-done Hamidou Diallo.

He Could Grow Into An Incredible Shooting Guard

While Diallo is a question mark due to never making an appearance at Kentucky, he is oozing potential. Standing at 6’5, the 18 year old has a 6’10 wingspan and is very exciting to watch in transition — specifically at the rim. The former five-star prospect is known for his above-the-rim tendencies. He is an explosive athlete that has good enough handles to make an impact in the open court.

His skills as a slasher and dunker are what he hangs his hat on now, but he does have the beginnings of a decent jump shot. His form isn’t broken, but he needs to improve on consistently hitting open midrange shots and three pointers. He shot only 16.7 percent from deep during the Nike EYBL showcase, but since he got to Kentucky in January it is something he has been constantly working on. When talking about Diallo’s improvement since arriving in Lexington, senior teammate Derek Willis had this to say about him in addition to calling him “scary good”:

“The main concern with Hami coming in — when I started hearing people’s opinion on him — was his shooting ability,” Willis said. “And that’s taken off for sure. Him working with Kenny Payne and the rest of our coaching staff, they’ve helped him tremendously on that. He’s definitely shooting a lot better since he’s been here.”

In addition to what he does offensively, Diallo is known for being an incredibly gifted rebounder for a shooting guard and has all the tools to succeed on the defensive end. He is lanky, tenacious, and has a nose for the ball. If he gives consistent effort on defense, he has a chance to impact the game similar to how Caris LeVert does on the defensive end.

How Would He Fit In Brooklyn?

Given how little of a look he has gotten since getting to Kentucky in January, it is tough to gauge what kind of player Diallo is outside of the high school/AAU circuit. Right now, he is an incredible athlete with a lot of tools but that is really it. Think LeVert without a three pointer and less developed handles, or a suped-up version of year one Shabazz Muhammad.

NBA scouts have been very high on Diallo and it is showing in mock drafts. CBS Sports’ Gary Parish mocked him at 24 to the Utah Jazz, mostly due to what he has heard from scouts. He had this to say on the 18 year old in his most recent mock:

So now Diallo has an interesting choice. Does he remain in the 2017 NBA Draft — where scouts I’ve spoken with suggest he’s likely to be selected in the 20s? Or does he play next season at Kentucky and then enter a weaker 2018 NBA Draft — where he could be a lottery pick?

There are pros and cons to both options.

It remains unclear what he’ll do.

But, for now, I’m projecting Diallo to remain in the 2017 NBA Draft and go 24th to the Jazz. He would add athleticism to a backcourt that doesn’t have much of it. And he could develop into a star who plays next to Gordon Hayward for many years to come.

Diallo is a 6-5 shooting guard who is an explosive athlete with good skills. He would probably be a lottery talent in next year’s draft. So if you can get him now in the 20s, why not?

Is there another backcourt that could use some depth and athleticism and someone to develop into a star alongside a young core and established veterans? Sounds like the Brooklyn Nets fit that description too. Diallo could develop into the perfect complement to Jeremy Lin.

Lin struggled defending fast guards this season after injuring his hamstring. It remains to be seen if this rash of injuries will continue to impact him, not that anyone expects it to, but given the recent rumors linking the team to 30 year old Serbian superstar Milos Teodosic the Nets will need lanky, defensive minded guards on the roster to cover possible holes in the perimeter defense.

In addition to his potentials as a defensive complement to any point guard on the roster or on the team’s radar, he is known for his offensive rebounding and his general nose for the ball would be a welcome presence. Given how many shots this team puts up in the average game, Diallo stands a chance to pull down a ton of rebounds.

If Diallo stays in the draft, he would instantly be one of the most interesting prospects in the class given his lack of experience. After enrolling at Kentucky in January, he was eligible to play but it was always in his plan to redshirt this season in order to hit the ground running next season. He entered the draft in order to gauge his stock and gain the experience and confidence that comes with the pre-draft process, but now that it looks like he could be a first round pick without playing a minute of basketball at Kentucky he might stay in the draft permanently.

He wouldn’t be the first player in recent memory to make the prep-to-pro jump in the age of one-and-dones. Last year Thon Maker was able to successfully enter the draft despite never playing college basketball. His recent success with the Milwaukee Bucks, especially in the weeks leading up to the playoffs and the playoffs themselves, could help Diallo’s stock in the eyes of teams that are hesitant to draft a prospect that is both incredibly young and untested against the proper competition.