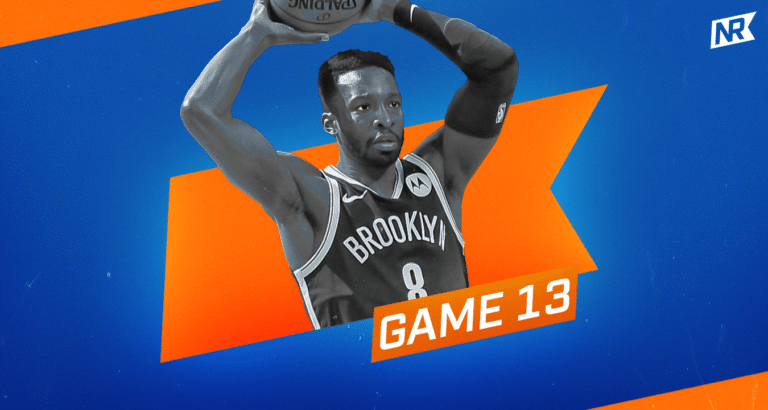 Brooklyn Nets: 5 Takeaways From an Easy Win Over the New York Knicks

Without the four players who made up their trade package for James Harden, the Brooklyn Nets got an easy win over the New York Knicks on Wednesday night.

The Brooklyn Nets start off the James Harden-era with a win, and without James Harden. Yes, after what feels like months of swirling rumors between the Nets and a trade for the 2018 MVP, a deal was struck with Houston on Wednesday.

The cost? Two of their top players, four unprotected first-round picks, and four future pick swaps. But that’s not what we’re here to talk about. On what may be the last night we’re not talking about James Harden, let’s talk about a good win.

This trade for James Harden left the Nets without Caris LeVert, Jarrett Allen, Taurean Prince, and Rodions Kurucs on Wednesday, in their nationally televised bout against the New York Knicks. Yet, the final score aside, this was as effortless a win as the Brooklyn Nets may have had all season. They finished as the victors, behind a 116-109 final count.

Brooklyn handled the Knicks with ease, largely by way of Kevin Durant‘s 26-point barrage. After starting a little slow, the Nets’ franchise face and two-time champ found his groove between the second and third quarters, all but sealing the victory.

New York put up a fight, albeit not as much as new drill sergeant head coach Tom Thibodeau would have liked, but a fight nonetheless. Julius Randle finished with 30 points, seven rebounds, and five assists in a full 40-minutes of play. Some of those 30 points were jumpers or baseline buckets over Durant, the only competition the Knicks presented all night.

That being said, there are some huge takeaways you can concretely gather from this win over New York.

Bruce Brown is Who We Thought He Was

Surprise, surprise; defensive wing Bruce Brown got an opportunity with so many absences in the rotation, and boy did he deliver. The 24-year old guard finished the night with 15 points and 14 rebounds in 30 minutes of play, and with what was his first double-double since February of last season. Brown had 16 points and 10 rebounds in a loss for Detroit.

But enough about the past, the present (and very well the future) should involve Bruce Brown. The often acclaimed bulldog-like defender was everywhere on Wednesday night and still put together his best offensive game as a Net this year. His 15 points came in a number of ways, but fans are already getting used to seeing his floater fall through the net.

Brown, after being acquired via trade I might add, was held out of four of Brooklyn’s first 12 games this season. After back-to-back games with double-digit points, and the Nets personnel only diminishing by number, expect his role to increase.

Head Coach Steve Nash’s Job is Only Getting Harder

Any head coach for this Brooklyn Nets’ team was signing up for an arduous assignment. But for Steve Nash, a first-time head coach and a still appropriately friendly member of the NBA’s inner circle, it was destined to be a larger-than-life uphill climb. But as much as (if) you want to give him credit for their strides thus far, don’t worry; James Harden is en route.

Now, not only will Nash have to navigate an even-further depleted roster, but he’ll have to manage the three Hollywood-caliber personalities that are booking residence in his locker room. Obviously, that’s ass Kyrie Irving makes his way back to the Nets, which as of today—has yet to be determined. But that’s just another element to Nash’s day-to-day.

On the other end, in regards to the “depleted” roster, Brooklyn’s head coach had to sit on the sidelines on Wednesday night and watch all but two players finish in double-figures (DeAndre Jordan and Chris Chiozza). If you’re doing the math at home, that means the Brooklyn Nets had seven active players register 10 or more points. Those are all guys who are vying for playing time under the next generation of this roster, and it’s Nash’s job to decide if they get it or not.

There are some shitty jobs around the league, and heading a championship roster certainly isn’t the worst. But no one is envying the plate that’s been presented to Steve Nash, especially now, in light of Brooklyn’s blockbuster trade.

DeAndre Jordan Isn’t Going Anywhere, Nor Was He Ever

I’ve been as much an advocate for DeAndre Jordan as anyone for the last few years, for all the obvious reasons: despite his age, the guy is a perennial rim protector who’s still got the ups to catch fancy lobs and land the occasional poster. But as the games went on, and fans continued their weeping, it became clear that the starting job belonged to Jarrett Allen.

Which is great and all, but, now he plays in Cleveland. So to those fans who’ve been constantly shredding down Jordan’s talent in hopes of Nash and company reading one of your tweets and coming to the light, it’s time to retrace your comments.

And Jordan, for all intents and purposes, looked revitalized in Wednesday’s win over the Knicks. He finished (as the starting center I have to include) with nine points, 12 rebounds, and two blocks in 28 minutes of play. His and Durant’s connection on the court continues to push results, and I’m sure he’s thrilled about not having been sent packing to Houston.

There aren’t many teams or big men that are going to be able to stop Jordan from landing lobs moving forward, now that he’ll have three future Hall of Famers tossing them his way. It ties into this team’s new scoring ceiling, or lack thereof, but any doubts or concerns anyone’s had about the big man’s fit or on-court efforts should only continue to wash away.

This one isn’t so much a take as it is a reminder. Brooklyn connected on 16-of-40 attempts from behind-the-arc on Wednesday night, which is good for a 40 percent shooting percentage. The Nets’ had five players make multiple three-pointers, with Jeff Green and Kevin Durant combining to make six-of-nine shots from deep.

If this trend continues in Brooklyn, they very well may finish the year as the league’s best three-point team. Thus far, they’re up to a 39 percent average from three-point land, which sits them fourth in the league, behind a lineup compromised strictly of contenders only: the LA Clippers (42.9%), the Milwaukee Bucks (41.3%), and the Los Angeles Lakers (39.6%).

Why is that relevant? Well, more so, why wouldn’t it be? If you’re going to make noise in the playoffs and make a run at the title, you need to be able to rely on the team’s scoring ability in all areas of the floor.

The only reason Brooklyn isn’t sitting atop the league in this category is likely due to the few (justified) absences of Durant, and then the sustained absence of Kyrie Irving. Expect James Harden’s arrival to only continue pushing the agenda here. Brooklyn’s got a number of shooters, who, with time should only hone in their accuracy and consistency from deep.

So many people were concerned with Kevin Durant’s longevity after his Achilles injury, and rightfully so.

There were people wondering how the league’s most athletic seven-footer would move when he returned, or how and if his approach on the defensive end would be affected. But no one took time to think he could come back even better. And when you look at the time he took, as well as the Brooklyn Nets’ patient approach with his rehab, it should have been discussed.

Because the Durant we’re seeing on the floor today looks very much like the Durant who played in Golden State.

Hell, if you said he looks better, not only would you not be lying, but you might just be right.

Even if simply from a numbers standpoint, Brooklyn’s alpha star has improved almost across the board. He’s bumped up his scoring average (26 to 29.4 now), his rebounding numbers (6.4 to 7.2 nightly), and even his three-point percentage (.353 clip up to a blazing hot .462 this year)! Durant looks more capable than ever as a scorer, and that should have a number of the league’s best up at night, plotting their postseason excuses when they inevitably fall to Brooklyn in the playoffs.

I don’t know what the worst possible outcome for the Nets’ gamble on Irving and Durant was, but with the way the Slim Reaper is playing to start this season; this reality is shaping up towards what some pictured as the best possible yield.

Kevin Durant finished Wednesday night’s game with 26 points, six assists, and two blocks in 30 minutes of play, and more notably his first back-to-back appearance of the season. He’s now tallied 25 or more points in eight straight games, which matches a Brooklyn Nets’ franchise record, and answers any and all questions about whether or not he’s truly “back.”