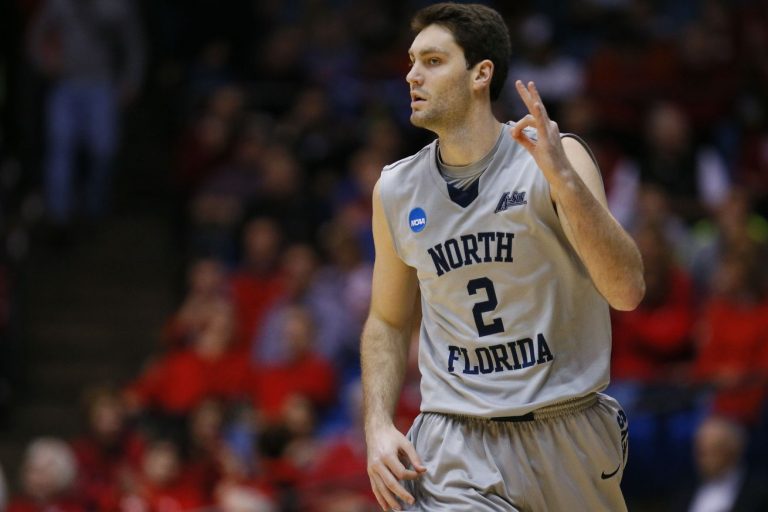 Fighting for a Spot: Beau Beech

With the NBA becoming more and more reliant on perimeter shooting, teams that don’t have enough of it are falling further and further behind. The 2015-16 Brooklyn Nets learned this the hard way, shooting the fourth least three-pointers in the entire league. As a matter of fact, this revamped Nets roster doesn’t have a whole lot of elite outside shooting either. In order to try and remedy this problem, the Nets offered a partially guaranteed one-year deal to Beau Beech. The 6’9″ swingman had a decent showing at this year’s Summer League, especially in his final game against the Cleveland Cavaliers.

Beech spent four years at the University of North Florida, improving his game with each passing season. By his senior year, he was the face of the entire basketball program. During his final season with the North Florida Ospreys, he averaged 15.9 points, 6.5 rebounds and 2 assists per game. He was particularly efficient from the three-point line, hitting 3 out of 7 attempted threes on average. In the process, he broke the school’s record for three-pointers made. Though he went undrafted, Beech’s 3&D potential and a current lack of wing options on the Nets roster convinced Sean Marks to give him a chance in the Summer League.

Position-wise, Beech is an interesting prospect. Though he was mostly utilized as a shooting guard in North Florida, his size makes him more suited for a small forward, or even a power forward. This kind of versatility is a welcome trait in today’s NBA. His shooting prowess is obviously his strongest suit, especially from beyond the arc. He always looks supremely confident in his jumper, and can be deadly out of catch-and-shoot plays. He’s a solid defender, and understands how to use his large frame in beneficial ways. He constantly tries hard on both ends of the floor, never taking possessions off. He’s a decent rebounder, and demonstrates good instincts around the rim.

Other than his shooting, his offensive game is fairly undeveloped. He’s an average ball handler, and shouldn’t be asked to create for himself or others very often. His athleticism is sub-par, forcing him to constantly play below the rim. He needs to continue to work on his off-the-ball movement, as that will be a big part of his game. Thought he’s undoubtedly a capable outside shooter, he can be annoyingly inconsistent from beyond the arc. He doesn’t drive to the basket often, settling for contested long range shots a bit too much.

Considering the lack of true small forwards on this Nets roster, Beech should eventually get his chance in the rotation. As the Nets will rely on a lot of pick-and-roll this season, Beech should settle in fairly easily. At the start of the season, however, he’s more likely to join the Long Island Nets.

Though his Summer League performance was a bit all over the place, he showed what he can do in his final performance against the Cavs. In that game, he converted five out of seven threes attempted, finishing with 15 points and 7 rebounds. It’s tempting to think of that performance as an omen of his future with the Nets, but Beech will need to show more consistency in order for that hope to become a reality.